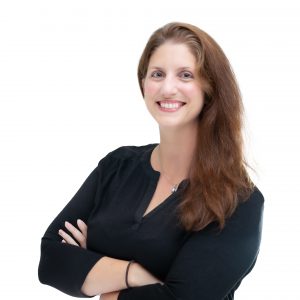 A. M. Adair is an active duty Chief Warrant Officer in the United States Navy with over 19 years in the Intelligence Community. She has been to numerous countries all around the world, including multiple tours in Iraq and Afghanistan. Her experiences have been unique and provided her imagination with a wealth of material to draw from to give her stories life. Published in 2019 through KDP with representation by Story Merchant Books, Shadow Game was her debut novel and the first book in the Elle Anderson Series. In 2020, The Deeper Shadow, book 2 in the series was released. The explosive finale to the series, Shadow War, is anticipated to be released by the end of 2021. Also coming in 2021 is Shadow Game – the graphic novel. A.M. Adair has partnered with graphic artist Ray Lopez to bring the world of Elle Anderson to life. She lives in Virginia with her husband, Jake, her daughter, Arya, and son, Finn. 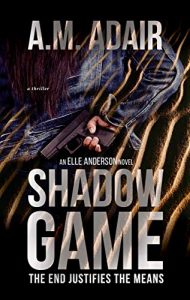 Elle Anderson waited until he was right on top of her. When he turned to yell for security, she shot her blade across the back of his ankle, cutting his Achilles tendon. The shock robbed him of his voice, and his body went crashing to the ground. She covered his mouth and slit his throat.

His body convulsed, making it harder to drag him into the shadows, but she needed to buy herself some time. She couldn’t risk one of the other men spotting him lying on the ground. It wasn’t perfect, and the man was still in the throes of death, but she had to go. Even if help were to arrive in the next couple of minutes, it would be too late. The only question was: how much time did she have before she had pursuit?

Sent in by the CIA, Elle Anderson leads a small, elite team charged with destroying the most dangerous terrorist organization the world has ever known. She is intelligent and resourceful and capable of anything, but she works in a world where emotions and distractions are unacceptable. It’s a world with no set rules and where the game is driven by will. This sometimes means acting more like the villain than the hero, because it’s the difference between life and death.

The line between good and evil is cloaked in shadow.

The end justifies the means.

And, this is just the beginning…. 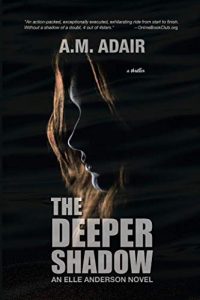 Elle kept moving, and he followed her. They were in a fight, and he was evaluating her every move. He could put a bullet in her head at any time. It made her skin crawl, knowing there was a threat directly behind her, but she wasn’t going to stop. She felt alive.

Pulled from the brink of death, CIA operative Elle Anderson now faces the fight of her life. Physically and emotionally battered, she struggles to recover from being captured by terrorists. To complicate matters, she still has a job to do, and the clock is ticking.

If she fails, we all lose.

The terrorist responsible for her torture is alive, and the network is regaining its strength. Her window of opportunity to end them is closing. It’s time to get back in the game and finish what she started. But how do you win a war when a battle is being waged in your own mind?

Rejoining her team, Elle moves to take control of her operation. Suffering from the impacts of her post-traumatic stress, she must find a way to keep everything together. But old enemies, and new, test her in ways she never thought possible.

Traveling to Africa, she sets her sights on her next target. A charismatic and deadly arms dealer; financier and facilitator of terrorists. To beat him, she must immerse herself in his world. When tested, will Elle remember whose side she’s on?

Threats can come from any direction, the deeper into the shadows you go.