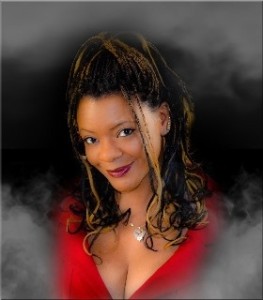 Aaron-Michael Hall is a Speculative Fiction (Epic Fantasy and Science Fantasy with an edge) author from Southern Illinois. Since she was young, she has loved to read. Whether it is historical, fantastical, or scientific, she will devour it with ease.

Now, when she is not interviewing indie authors on her Desu Beast Blog at aaronmichaelhall.com, being super mom, or managing her 9 to 5, she is interweaving genres and adding just the right edge to keep you turning pages.

Being from a large family, Aaron-Michael would often steal away high in a tree or nearby wood seeking solitude. While enjoying the peace her natural surroundings provided, she created her own worlds and languages. Some characters and elements created then are used in her current series. One of her created languages, Mehlonii, is comprised of hundreds of words. For a sample of the spoken Mehlonii language created for this fantastical series, please visit her website.

Aaron-Michael Hall takes her Epic Fantasy series to new levels of intrigue and does not shy away from some of the harsher realities in our own world. With her blend of magnificent world-building, stylistic prose, captivating multidimensional characters and superb dialogue, she submerges you in this new extraordinary world. There are hosts of characters that are interconnected and appealing, that add just the right amount of authenticity to this brilliant world of Faélondul.
The Rise of Nazil (book one) has been compared to the works of George R.R. Martin, Joe Abercrombie, R. A. Salvatore, and Michael Moorcock. With the depth of the plot and characters, those comparisons are well earned. This is intelligent Epic Fantasy that does not only entertain, it challenges the reader to think or rethink in some instances.

The Rise of Nazil is the first novel in the trilogy of the same name from this new author. Seed of Scorn (book two) and Piercing the Darkness (book three) complete The Rise of Nazil trilogy and are all available on Amazon.

When asked why she wrote this series, Aaron-Michael simply said, “It needed to be written.”

Blood of Oisin is the first novel in The Shifter trilogy releasing 2017.

Rites of Heirdron is the first novel in a Science Fantasy Romance duology releasing in 2017.

It is her hope that the readers enjoy the wonders of Faélondul and Ahmezurhran even more than she enjoyed writing about them. 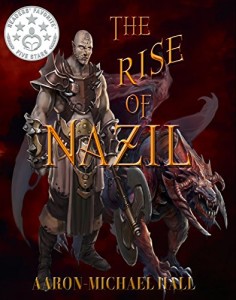 The Rise of Nazil. It was the 75th year of Alberoth when the AsZar summoned the Guardians. There was an imbalance in the lands of Faélondul. The Zaxson, Draizeyn Vereux, conspired to exterminate the infestation in Nazil. He planned to eradicate the humans.

Led by the priestly cast called the Cha, the Xenophobic Nazilians dominating Faélondul justified their brutalities against the humans.

But when the First Chosen of the elite guard discovers Brahanu Ravenot lost near the gates of the city, not only his life but also his entire system of beliefs is forever changed. With the darkness covering the lands, can love—forbidden, yet eternal—save both humans and Nazilians?

“The Rise of Nazil is an adult fantasy novel that takes your breath away. Intricate plotting, intense passion, exciting battles, and complex, challenging characters pull the reader into the mythical world of Faélondul, where powerful ethereal beings wrestle for domination against the brutal Nazilian rulers.” 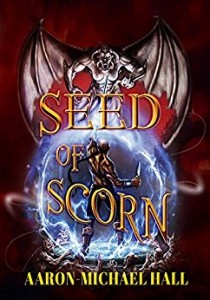 Seed of Scorn is the much awaited sequel to The Rise of Nazil.

Pentanimir Benoist fought a battle against the Nazilians after his love for Brahanu forced him to confront the immoralities of his heritage. He struggled to free the lands of Faélondul and end the brutalities against the humans. Now, he stands as Zaxson, the most powerful man in the lands.

In the aftermath of his victory, a new enemy emerges. Both Nikolina d’Garrion and Molag Bomgaard are unwittingly manipulated by an ancient evil. With the release of a Zon’tul and an indissoluble pact, the pall of darkness manifests: a darkness the Guardians could not foresee nor deter.

Pentanimir’s love for Brahanu was the catalyst for Nazil’s rebirth. Will that same love lead to its destruction?

”Seed of Scorn takes the epic saga to previously unheard of levels of complexity and intrigue. It is an enthralling tale of love, honor, betrayal, and the perfidious depths people will descend for the sake of revenge. Aaron-Michael Hall’s craftwork—the unforgettable characters, the surprising twists, and turns, the intricate, rich plotting—will dazzle you. If you loved The Rise of Nazil, prepare to be blown away! Seed of Scorn will grip you from the beginning and leave you in awe.” 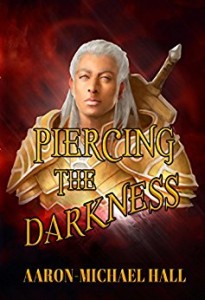 Piercing the Darkness is the third book in The Rise of Nazil adult epic fantasy trilogy. The conflicts and treacheries of Seed of Scorn have led to an inevitable battle not only in the lands, but also for the lives of the Benoists.

With the wraith’s essence embodying one of Faélondul and the coveted blood of Oisin, the gates of the abyss have been breached. The Guardians have prepared their paladins but that preparation has inflicted a wound upon the hearts of the Benoists.

Which side will be victorious when the combatants share the same blood? When the cousins’ battle begins, neither one can win…without dying.

“Aaron-Michael Hall doesn’t disappoint with the shocking twists and turns he’s delivered so eloquently throughout this series. He masterfully weaves a story with such intricacy; it demands your full concentration. When all the secrets are revealed, you’ll be left speechless and begging for more.”