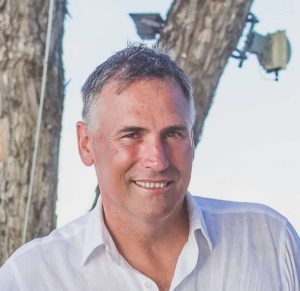 Adrian Russell came to novel writing later in life. He began writing the first few words of his debut novel when he was in his late forties, but it was only when he was diagnosed with cancer in 2014 that he got serious about writing. His debut novel Nothing Left But fear was mostly written whilst he was going through chemotherapy treatment.
Writing for Adrian was a great distraction for him and helped to take his mind off the fearful thoughts that he experienced whilst he was going through this disease. Adrian’s writing technique leaves the reader in suspense at the end of many of his chapters, as many finish on a cliff-hanger. He recalls reading Dan Browns novel The Da Vinci Code for the first time, where Dan also uses this same technique to keep the reader hooked throughout his books too.

Adrian lives in Hampshire on the edge of the New Forest and close to the beaches of Bournemouth. He lives with his lovely wife Jo, their dog Missie and cat Lilly. Although, you’ll not always find him there, as he and his wife love to spend time in far flung places like Barbados and Greece. You’ll find him tapping away on his iPad working on his latest novel on the beach, in between windsurfing, sailing, snorkelling or scuba diving.

Adrian has a real love of animals and of horses, having been to Africa on a number of occasions. One time he experienced a horse-back safari with his daughter, exploring the plains of Africa and galloping alongside giraffe and wildebeest. His fascination with animals also extends to below the surface, where he loves to explore the ocean depths. He particularly loves to see sharks, dolphins and turtles, but he also has an affinity with seahorses and other small critters that live in the sea.

Nothing Left But Fear (Thriller, Horror) 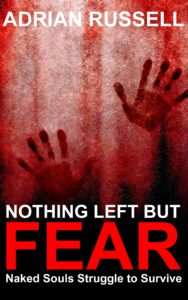 Sadistic kidnappers leave unsuspecting deadbeats vulnerable and alone in unfriendly and hostile places. These wasters are dumped in places that are far from the comfort and safely of their homes.
An unsuspecting guest becomes a part of the experiment too, where he and the deadbeats soon find out they are not actually alone at all. They wake up stripped of everything, including their clothes. So not only are they naked and afraid, but also disoriented and lost.
When they realise what’s out there, they are not only left with a deep primal fear, but they are now faced with a fight for their very survival. They are hunted like quarry and quickly find out that nature never rests and humans make easy prey.
This gut-wrenching horror from Adrian Russell takes readers on an eye-popping journey to a place where mercenary predators lurk at every turn. From the moment they awake there’s no let up for them, as they are tormented at every turn.
5 Star Review…
“On the edge of your seat thriller. Wasters are kidnapped and dumped in a place far from home, very unfriendly scary places. They are not alone, what or who is out there? How or will they survive the night? They are hunted like prey. My heart kept skipping beats reading this book. i loved it, my kind of story, keep it coming. I can’t wait for the next book from Adrian Russell.”
5 Star Review…
“An uncomfortable yet compelling read – An intriguing and original novel. You are drawn in from the first page as the terrifying plot unfolds… A unique story-line which delves deep into the human psyche.”
Goodreads Review
“An amazing read. There were parts in the story where I was afraid to turn the page. Man is so vulnerable when he is taken out of their comfortable surroundings.”
5 Star Review…
“Gripping! Extremely gripping right from the beginning, could not put it down! An excellent read!”