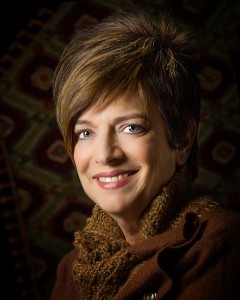 Award-winning author Barbara Oliverio is a lifelong reader and learner. She credits her ability to spin fiction to a family genetic natural tendency to embellish when recounting any story. A career that includes time as a high school teacher, high tech marketing manager and software technical writer has given her a rich environment for characters and a wide backlog of interesting dialog from which to borrow. Barbara lived in Italy for several years and took advantage of the opportunity to practice the native tongue of her Italian immigrant parents as well as the time to travel throughout most of Europe. She has an eclectic set of interests including travelling, cooking, singing, and mastering the New York Times crossword puzzle. An avid indoor enthusiast, she will accompany friends and family to ski resorts near her Denver home, but does not feel compelled to ski or snowboard. She and her husband love sports and politely (for the most part) co-exist as fans of separate football teams – she a die-hard Steeler fan, and he a misguided Giants fan. Barbara has admitted addictions to the Olympics (summer and winter), World Cup soccer, and Game of Thrones.

Love on the Back Burner: A Tasty Romantic Comedy (Chick-Lit/Comedy) 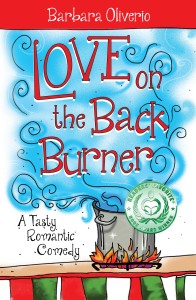 Readers’ Favorite Award™-Winning Love on the Back Burner spins the story of sassy Alexandria D’Agostino. She is youngest in a tight-knit Italian-American family with a successful marketing career and a passion for cooking, yet her romantic life is less than 4-star. For years, she has tried cooking her way into men’s hearts by flaunting her old world culinary skills, but now, she’s changing the menu. She dishes up childhood favorites to a succession of first dates (recipes included). The book features an engaging cast of characters including a rock-star-turned- priest brother, a no-nonsense Italian immigrant grandmother, and a crew of friends who are always up for a good meal. With a dollop of persistence and a dash of laughter, will Alexandria discover the recipe for happiness — and perhaps love? 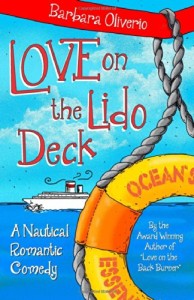 Sharp-witted, always-organized Keira Graham has traded in her high tech career as a systems analyst for the whirlwind world of event planning. As she builds up her fledging business, she learns that her widowed mother has news of her own — a serious gentleman caller! Is Keira ready for mom’s new romance? When she gets a game-changing opportunity to organize a major event on a luxury Caribbean cruise, Keira turns to best pal chef Alexandria D’Agostino to help recruit famous chefs who will offer classes for foodies looking for fun in the sun as they gain cooking know-how. The cruise becomes a rollicking adventure for Keira, her sassy assistant Juliet, the entire D’Agostino clan, Keira’s mother and other surprise guests. And has Keira meet her match in charismatic Cruise Director Brennan McAllister, who could have something more than keeping everything shipshape on his mind? Filled with wit, charm, and a few recipes along the way, Love on the Lido Deck brings characters to life with laugh-out-loud situations, crisp dialog and sweet romance on the high seas.