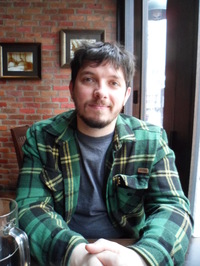 Brandon Draga was born in 1986, just outside Toronto, Ontario. His love of all things fantasy began at an early age with games like The Legend of Zelda, Heroquest, and Dungeons and Dragons. This affinity for the arcane and archaic led to his studying history at York University from 2005 to 2011. In late 2012, he began writing a D&D campaign setting that would lay the groundwork for the world of Olhean, the setting for his “Four Kingdoms Saga” novel series, compared by critics to the works of Terry Brooks, Michael J. Sullivan, and R.A. Salvatore. Brandon has also proven that SF/F can be made accessible at any age, writing the lauded picture book “Dragon in the Doghouse”. Brandon still lives just outside Toronto, and when he is not writing enjoys skateboarding, playing guitar, and playing tabletop games. 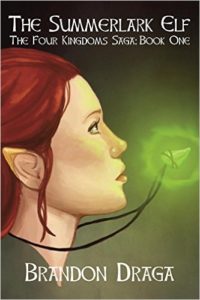 Enna Summerlark has spent her entire life as a farmer’s daughter in the kingdom of Hallowspire, paying little mind to anything past what to sell at the next market day. When the next market day comes, however, strange events take place that will reunite her with an old friend, bring her into the world of a pair of sell-swords, and reveal a secret that will change Hallowspire forever, and cause ripples across the whole of the Four Kingdoms.

The first book in “The Four Kingdoms Saga”, The Summerlark Elf introduces readers to compelling characters in an engaging world of swords and sorcery, personal turmoil and political intrigue! 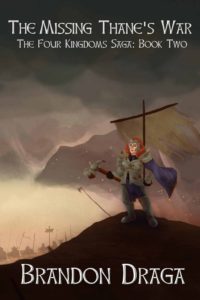 For all her life, Enna Summerlark assumed she was a farmer’s daughter and nothing more. A whirlwind of events changed that, causing her to leave everything she knew in search of a past she didn’t know she had. Alongside her new friends, the dwarf merchant Adrik and the sell-swords O’Doc and Erasmus, the young elf travels to the city of East Fellowdale in search of answers.

The companions’ quest hits a sudden snag, however, when Adrik mysteriously vanishes. Now the remaining friends must place their trust in unlikely allies, face ghosts of their pasts, and delve straight into turmoil if they are to discover Adrik’s fate.

The follow-up to the critically-acclaimed “The Summerlark Elf”, “The Missing Thane’s War” continues to build upon The Four Kingdoms, raising the stakes for the world at large and its inhabitants alike! 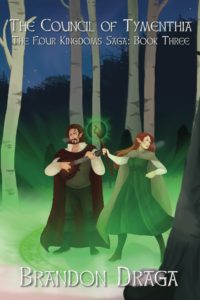 War has erupted in the Four Kingdoms. Queen Merrian of Lohvast is finally making good on her dark designs for neighbouring Hallowspire, and as Enna, Erasmus, O’doc, and Falken return from the Dwarven Thaneships, the disappearance of O’doc’s aunt finds the group unwittingly pulled into the middle of the conflict. Seeking allies among the shadows of their pasts, the companions make their way to the kingdom where their journey together first began, only to be suddenly ripped apart. Vanishing without a trace, Enna and Erasmus find themselves faced with long sought-after answers, all while trying to find a way back home, where O’doc must try and pick up the pieces of their mission.
With higher stakes, more action, and surprises around every turn, book 3 of The Four Kingdoms Saga opens up the world around Enna Summerlark and her friends in ways that are as unexpected to the reader as they will be to their favourite characters! 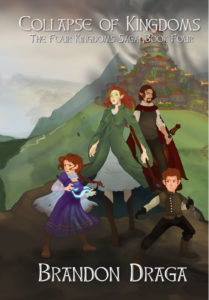 After months of searching for the secrets of her past, Enna Summerlark has finally found the answers she sought. In doing so, however, she has unwittingly helped to throw the world into complete chaos.
With the Praetor of the Council of Tymenthia dead, a centuries-old spell keeping arcana in check across Olhéan is broken, stripping arcanists of their powers, and freeing the demon Nebalsus from Its prison. Enna and Erasmus find themselves stranded on the continent of Shahtyr, trying to find a way home to undo the damage that has been wrought.
Half a world away, O’doc and Odonwa struggle to make sense of a world suddenly turned upside-down, with no explanation as to why. With their search for their missing friends at a stalemate, the halflings embark on a search for their aunt Caliope, unaware that the war between Lohvast and Hallowspire is only just beginning, and that a nascent traitor may be in their midst.
With Enna and her friends torn apart, and the fate of the entire world hanging precariously in the balance, Collapse of Kingdoms raises the stakes to their highest, offering up the thrilling conclusion to the Four Kingdoms Saga.

Dragon in the Doghouse (Children’s) 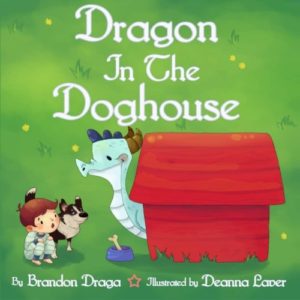 What would you do if you awoke one morning to find a great White Dragon had taken roost in your backyard, scaly little kobolds had begun eating all the food in your kitchen, and a powerful old Lich had decided to wash his robes in your laundry room? What would you do if it didn’t look like they planned on leaving? In Dragon in the Doghouse, a young boy finds out when he awakens one morning to find his house overrun by all sorts of wild fantasy creatures. Filled with silly situations, fun illustrations, and enough monsters to write a manual, Dragon in the Doghouse is an adventure that both kids and parents will love. 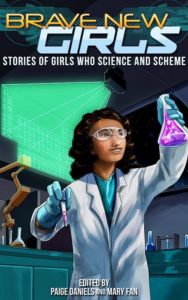 This collection of sci-fi shorts features a variety of brainy young heroines—girls who engineer, tinker, experiment, and more. Voyage to far-off galaxies with girls who use their science savvy to fix rovers, rescue friends, and protect alien critters. Visit steampunk realms where young ladies put their skills to the test building mechanical wonders and solving mysteries. Trek across sci-fi landscapes with girls who save androids and repair robots. Journey to post-apocalyptic futures where heroines use their tech know-how to bring down overlords and spread the most dangerous thing of all… knowledge. And drop in on a few near-future heroines who use their smarts to take down supervillains and bring a little more understanding into the world.

Proceeds from sales of this anthology will be donated to a scholarship fund through the Society of Women Engineers. Let’s show today’s girls that they, too, can be tomorrow’s inventors, programmers, scientists, and more.