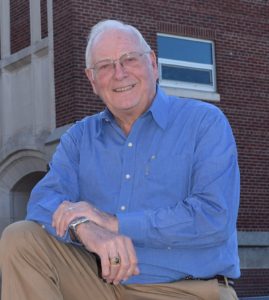 Captain Jim Kosmo is a national award-winning journalist and author, a U.S. Coast Guard-licensed Mississippi riverboat pilot, and former partner of Padelford Riverboat Company in St. Paul, Minnesota. Before joining the family riverboat business, he was a newspaper editor in Nevada and Minnesota and corporate public relations executive in Minnesota and Illinois.
Kosmo’s newest book, Monsters in the Hallway, is a mystery novel based largely on his childhood in Eau Claire, WI. His previous book, Still Standing: The Story of SSG John Kriesel is a non-fiction account of a soldier who lost his legs and two buddies in an IED explosion near Fallujah, Iraq. The bestselling motivational book is in its 10th printing.
He served as president Rotary Club of the St. Paul (2013-14), founded the Minnesota Valley Branch YMCA, was chair of the Rivers Region of the Passenger Vessel Association and Mayor of the city of Bayport (MN). He also is business representative on the Minnesota National Guard Senior Advisory Task Force and sits on several health and education boards.
Kosmo and wife Shelley have a blended family with eight adult children and twelve grandchildren.

Monsters in the Hallway (Mystery) 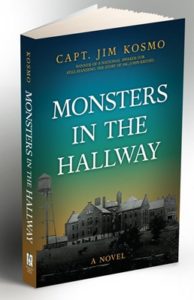 In December 1949, life was nearly perfect for Jason Korsen–until voices told his father to kill the family. They escaped death but Jason’s father, Peder, was sent to the insane asylum.

Ten years later, Jason’s friend Roy Pettit is found molested and murdered after a Boy Scout meeting. A choir girl disappears that same night. The obvious suspect is Peder Korsen, who escaped from the asylum.

Everyone in town is ready to hang Peder–everyone except Jason and Detective Joe Stroud. One month away from retirement, Stroud is haunted by the case and challenged by extreme political pressure to charge Peder.

Jason knows he must prove his father’s innocence, but how? Who would listen to a high school senior, the son of the main suspect?

And who would ever believe him if he named the real killer–a monster who has done more than just kill a Boy Scout?