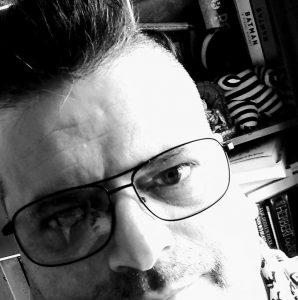 Colin Davies (1970-) has been writing for many years. His children’s novels “Mathamagical” and “Anagram-a-phobia: at word’s end” have been very well received with the former appearing on TV shows around the world as a prop used by Izzy Simpon from the “..Got Talent” series of shows. His poetry is highly commended with a poem about Doctor Who from his acclaimed show and book “2001: a space ode and ditty” being filmed by the 6th Doctor himself, Colin Baker.

Now Colin is turning his attentions to horror and sci-fi with the first of a series of anthology-style books. Twisted tales of the macabre, dark sci-fi and warnings about future technology all come together in a mind that has been described as “Intellectual brain spaff”, “A can of springy joke shop worms”, and “A hurricane of humour, hugs and horror. Full of love and chaos.”

With plenty of blood and a big pinch of terror, Colin’s work is all about entertaining the reader. His command of the written word allows him to paint pictures in other people’s minds. He has always seen the vocation of writing as a gift that must be shared.

Novelist, playwright, scriptwriter, poet, family man, and advocator of people’s rights, Colin tries to encourage others to succeed as well as ensuring his own work reaches the highest possible quality. 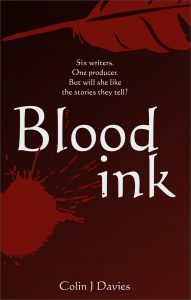 What would you give to be a famous writer? – With her soft Kansas accent and fat Cuban cigar, Ms Nikita is always on the lookout for the next great story. Six writers, some new, others she has worked with for years, all with new stories she wants to hear. Tales of horror and science fiction, if Ms Nikita is happy, she’ll work her magic. All they have to do is sign the contract with Blood ink.