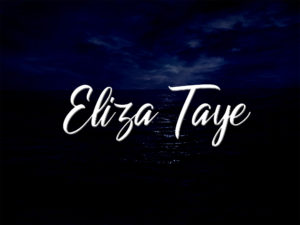 Eliza Taye is an introverted night owl who loves to escape into the myriad world of books. When she was a shy kid, she would stick her nose in a book to shield herself from having to talk to other people. As an adult, she no longer does that, but still struggles with coming out of her shell. Besides reading and writing, she enjoys traveling, photography, and all things science and nature. She’s traveled to over half of the fifty states in the USA and hopes to one day visit them all. Oftentimes her travels and observations of nature inspire her writing. After obtaining a marine science degree, she became inspired to write sci-fi in addition to the fantasy stories she wrote growing up. Two material things Eliza could never live without: books and music. She never leaves the house without at least one book and a way to listen to music. Music fuels her passion for storytelling, allowing her to daydream that she’s defeating bad guys, exploring unknown worlds, or wielding swords of destiny, when in reality, she’s just writing about it. She’s the author of the Oceania: The Underwater Series books, which was nominated for the Best Story Award in 2017 from the NY Literary Magazine. She writes sci-fi, fantasy, and action adventure novels for young adults. 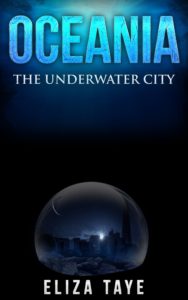 The year is 2276. Oceans have risen. Oil has run out long ago. The human population has skyrocketed to over 14 billion people. Decades and hundreds of years of pollution, bad waste management, and limiting food resources have caused countless natural disasters and diseases, damaging our world. The worldwide Great Plague of 2083 disturbed world governments that if another such outbreak occurred, the extinction of humanity would be imminent.

The solution? Oceania. A city lying over two miles beneath the surface was supposed to be the secret experimental human civilization under the sea. Only the best and the brightest from each country around the world was selected to move there. Everyone the top of their respective fields holding the highest degrees possible for their profession.

So, what happens when a bored, yet curious fourteen-year-old girl named Allie trespasses on a restricted government beach with direct access to the city? She stumbles upon a boy her age from Oceania, who was convinced that his city held the only human survivors on earth. Curiosity getting the best of her, Allie accepts his invitation to visit it. She discovers a world so different from her own that she can’t help but visit it again and again, turning her boring summer with her grandmother into an adventure of a lifetime.

But will Allie and the boy’s friendship ruin the secrecy of the experimental city Oceania? Or will Allie be discovered as an outsider on one of their frequent trips to Oceania and be barred from ever leaving?

Oceania: The Underwater City is a young adult sci-fi novel packed with exploratory underwater adventures, science, and more. It is a story about friendship, courage, and finding one’s place in the world. 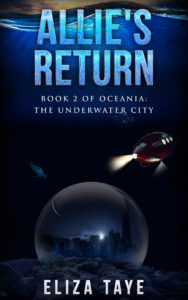 Two summers ago, Allie and Dylan exposed the secret underwater city of Oceania. Now the Above World and Oceania are once again united but that’s all about to change. The Great Plague has resurfaced and spread through the land-dwelling world. To protect Oceania, all outsiders are barred from the city, but not before Dylan sneaks Allie in to protect her. Unable to risk infection by returning home, Allie is forced to find a place in the highly academic society of Oceania. While the Above World scrambles to find a cure to the deadly plague, Allie struggles to find her place in the community that she’s illegally become a part of. Will she be able to find her place amongst the Oceanians or will the perfection-based haven be too much for her to handle?

Full of adventures to rival the first book, Allie’s Return continues with riveting undersea action and exploration that will immerse you in the world of Oceania and leave you wanting more.