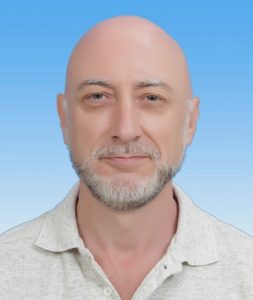 Born in Northwest England, G. R. Wilson is a self-taught Technical Writer and Non-Fiction Author who has visited (as a traveler) 24 nations: working in 9 of those, and living in 3 (Jamaica, Abu Dhabi, and Indochina). He is a qualified Engineer (specializing in Process Controls and Instrumentation) with an MSc in Artificial Intelligence, won at a British “Russell Group” University when aged 40 years.

Spending 12 of his twenty “middle and strongest years” working in the Oil & Gas industry of the Middle East and North Africa transformed Wilson into an opportunistic globetrotter, while simultaneously sealing his bachelorhood.

His varied experience of enigmatic Saudi Arabia includes witnessing life in both its Persian Gulf and Red Sea regions. He has driven a hire car through the Hijaz Mountains en-route to Medina, hunted for desert roses around Ayn Dar, and established a unique collection of flint arrow heads and stone tools collected from secret sites on the edge of the Rub’ al Khali. Roughly 15 years later more adventurous years were spent working in Abu Dhabi (including offshore), Qatar (including offshore), Libya (east and south), and Iraq (southern Baghdad).

Just prior to commencing his international travels (triggered by his first contract with Aramco) he was a staff employee of British Nuclear Fuels where he accrued 3 years with BNFL’s Capenhurst Uranium Enrichment Facility, followed by a short spell at their Risley Engineering Centre, near Warrington. This entailed several site visits to Windscale’s (Sellafield’s) Plutonium operations.

In 1991 Wilson’s inaugural attempt to become an author involved submitting an original (typed) manuscript to the Central London offices of two established publishing houses. His proposed book was about advancing Men’s Health. A pioneering initiative that presaged by 10 to 15 years the now well established fashion for men’s health products.

As so many were back in those pre-Amazon days, his manuscript was rejected. Yet its most compelling (imaginative) chapter somehow found its way into a British independent television series dedicated to alternative health issues. Broadcast about 9 months after those publishing houses were approached, one specific episode echoed Wilson’s manuscript so accurately he searched (in vain) for his name in the closing credits. Seldom has such a clear-cut case of piracy and plagiarism been committed by supposedly respectable people. In evidence, it is surely more than a coincidence that the London office of one of the two publishers approached, shared a building with the British Medical Association (BMA), who just happened to be one of the prime sponsors of that offending episode.

Influenced by the many nonsensical contradictions contained in the “official version” of the WTC destruction on September 11th, 2001, Wilson began to focalize on all issues surrounding Globalization, Outsourcing, and Conspiracies. In 2008 he belatedly discovered the fiat currency we mistakenly call “money” is in fact little more than a debt instrument, and that central banks (currently) control the world, not governments. The shocking ramifications of such suppressed truths were cathartic. In early 2014 he became an independent publisher for the first time: releasing a Kindle ebook that describes Nuclear Power and Weaponry to the layperson.

The fiat banking collapse of 2008-09, a dramatic devaluation of the British Pound versus Asian currencies, endemic wars in the Middle East, and major political upheavals (involving gun battles) in central Bangkok compounded into a “quadruple whammy”. That dramatic combination of events initiated 8 years of unpredictability, uncertainty, chaos, and waste years for this author. The erstwhile stability of his career, finances, and home (domestic) situations each suffered fracture and/or dissolution at the same time. The resulting stresses accelerated Wilson’s aging quite dramatically. A comparison of photographs taken during the 2012 to 2017 period offer a telling testimony.

At no point in Wilson’s life have conditions been conducive to marriage. Harsh circumstances (both financial and social) characterizing those years between his 18th and 27th birthdays – including the rapidly increasingly toxic influence of radical feminism in England – thwarted any hopes of marriage at a ‘normal’ age. And by the 1990s a property (Leasehold apartment) purchased in Sussex in 1987 had turned bad. The resulting pressures and stresses of extricating himself from that financial millstone thwarted his hopes of getting married before his middle-age years were over.

Yet a proverbial “silver lining” can be found even in austere and challenging situations. During mid-2017, Wilson gained the companionship of an intelligent and stylish lady who is part Thai, part Malayian, and part Chinese; a loving female less than half his age. Far from slowing down, this author now has little choice but to regularly pump weights in a local gymnasium! All to the good.

Wilson has several more non-fiction titles queued, pending completion, editing, and publication. Substantive blog posts are published from his website and from his Steemit account. You can choose to stay informed of G. R. Wilson’s diverse activities (such as podcasts and low-cost training courses) by subscribing to his occasional Newsletter. It will take you less than 20 seconds to join. 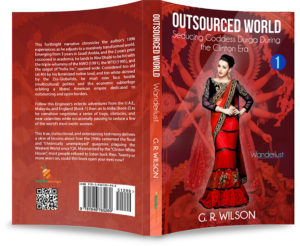 With its hi-tempo yet easy prose, Outsourced World – Seducing Goddess Durga During the Clinton Era calmly explains how the “New World Order” — comprised of Offshoring, and the WTO, and a globalized Outsourcing regime begging to be abused, plus a centralized Internet schema, and multiculturalism imposed exclusively upon ‘Western’ nations — was rolled out to an unsuspecting world right after the First Gulf War.

To many the 1990s will feel very distant. But to nonchalantly dismiss that unique and transformative decade would be a grave error. Why? Because the protracted crisis most of us have been living through since 2008 is the poisonous fruit grown from seeds planted during “the Clinton Era”.

Thanks to the 2016 Presidential election, those “Bonnie & Clyde Clinton’s” may at last be losing their surreal grip on the general publics’ unworldly and gullible imaginations. Nevertheless, most will remain mired in legislation enacted while almost everyone’s attention was kept focused on a vastly over-hyped Y2K problem.

Presenting a series of well-researched facts while adding value and originality through the application of the Author’s own deductions, Outsourced World succeeds in showing how that First Gulf War was conspiratorially used to trigger (or help clear the way) for all those Globalizing initiatives listed at the top of this book blurb.

Intertwined with his own entertaining (and ofttimes educational) 1996-era Odyssey, long hidden aspects of this “New World Order” project are patiently and clearly explained, and in logical sequence. And wherever appropriate, they appear in close relation to how they impacted the Author’s own predicament in both Abu Dhabi and Kuala Lumpur. Therefore, you will gain precious insights into how those two iconic cities felt just a few short years before they entered hyper-speed development.

During 3QTR 2017, this first volume (Wanderlust) in a short series was reviewed by a polyglot political correspondent and graduate of Cambridge University, England. You can access the full review via a link on this book’s dedicated website. Meanwhile, here are some non-contiguous extracts:

The autobiography which provides the framework of this volume is a gripping personal odyssey by a true raconteur.

Unassumingly woven into this narrative are Wilson’s hard-won, long-refined findings as to the monetary conspiracies and mind-control schemes — largely spun by or within the British Establishment — which now have the world in their grasp. These are seen to be the very schemes that suck the lifeblood out of any economy and culture.

All of what Wilson traces in this book — as set out in a rich variety of models — is but one element of the (still Western-led) “New World Order” that was formally announced in 1991, and which increasingly gathered steam throughout that decade of the 1990s.

This book is a treasure trove of signposts and observations which [readers] of any persuasion will appreciate for its honesty, coherence and style.

To understand complex issues in the shortest time, and to navigate two decades shaped by more than their fair share of chronic lies and deceptions, it always pays to go back to their source, or their origins. Too many laws and statues enacted during the 1990s now appear to have been designed with malice aforethought. They have since reached those goals intended; namely the evisceration of the West’s middle classes, and the pauperization its working classes. The clear way this book navigates the roots of this phenomenon represents one of its major USPs.

The 200 pages (including Addenda) that comprise the first volume of “Outsourced World” guides the reader through what would otherwise look like a thick maze to most. On a net basis, even the more experienced and well-traveled adults become significantly more informed having finished it.

This book does contain risqué scenes, so it is not meant to be read by those under 18 years. For example, sexual romps with some truly delightful, “East of Suez” women are explicitly described. Yet even these are re-framed in order that cultural insights, religious hypocrisy, and geographic comparisons can be maturely assessed. Such eye-opening vignettes are this Memoir’s raw evidence; they also soften the blow of this book’s deeper (more political) content.

This read could satisfy every Vive La Différence connoisseur. It will be valued by those who respect individual self-determination, and by those seeking guidance on how different (even conflicting) cultures can actually understand and enjoy each other when left alone to interact naturally and locally. This is a title equally suited to the armchair reader (male or female), to those stuck in a hotel on business in need of substantive entertainment, and those negotiating long-distance travel who really do need something truly original, bright, and substantive to compensate for that hassle and jet lag. Enjoy!