Guest Post: Chapter One of SOUL ON NICE from Norm Spitzig 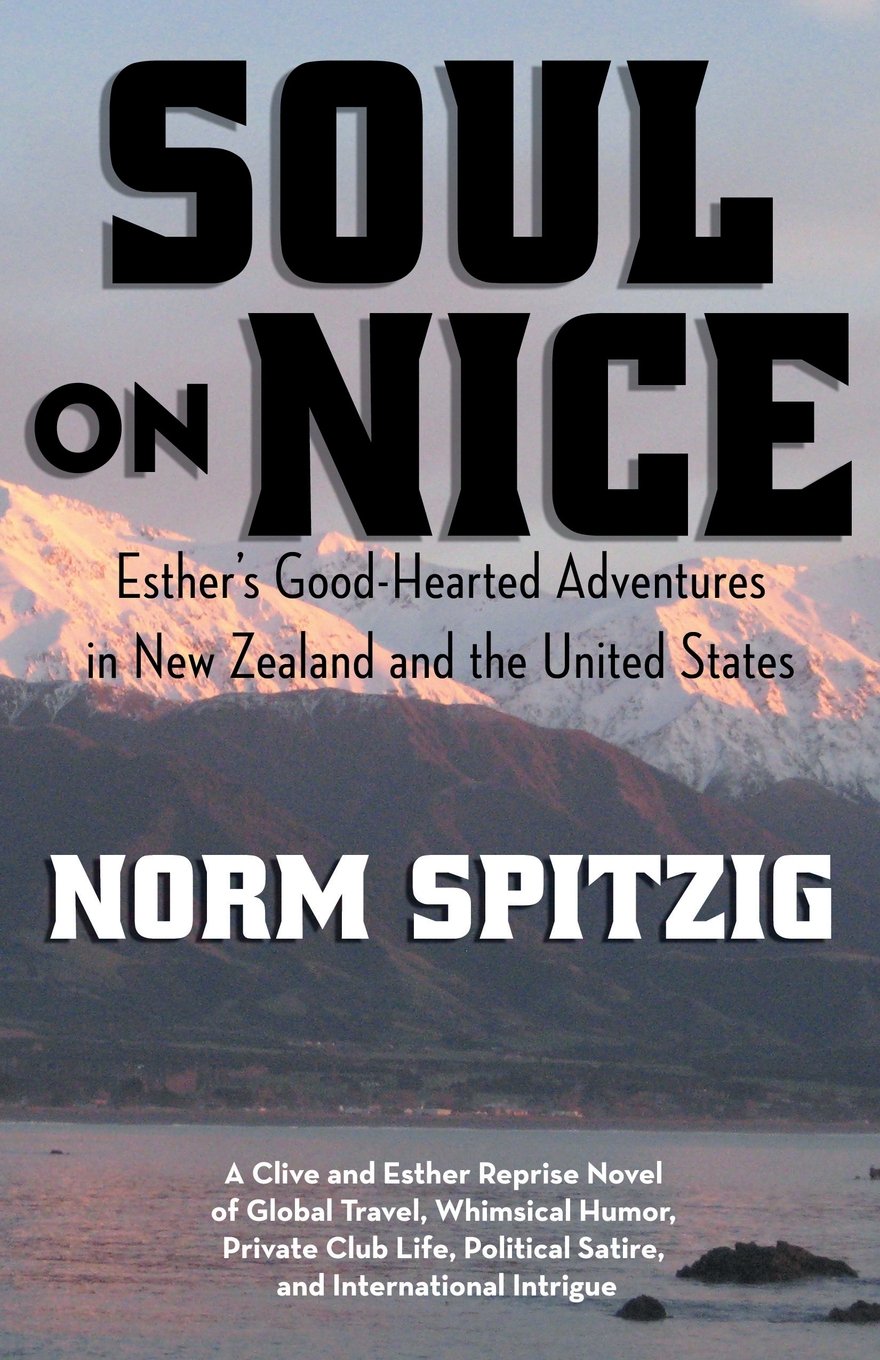 The Return to New Zealand

The thought that this was her fifth visit to New Zealand randomly flitted through her semiconscious mind. No, sixth, Esther immediately corrected herself as, with Herculean effort, she forced herself back to a state of full alertness. Uncharacteristically, she’d had a momentary mental lapse about the two wonderful weeks she had spent meandering about The Catlins in the fall of 2006. How could she have ever forgotten that glorious trip, if even for only a second—perhaps her most cherished visit of all to the land of Kiwis and Maoris?

Esther absolutely loved New Zealand. It was her undeniably favorite country (other than the good old US of A, of course—the land of her birth and lifelong residence) in the entire world—and The Catlins was one of Esther’s favorite parts of the country. She relished the fact that the area, not much more than a hundred square miles between Kaka Point and Fortrose on the South Island, was little known and sparsely populated, even by New Zealand standards. She feasted on the exquisite beauty of the rugged coastlines, the stunningly beautiful waterfalls, the lush temperate forests, and the hidden, crystal clear lakes. She savored the peaceful solitude that permeated every single bone of her spindly yet surprisingly strong body as she happily roamed the resplendent countryside from one spectacular place to the next. Ah, Nugget Point, Purakaunui Falls, Cathedral Caves, Curio Bay, and the exceptionally mouth-watering cuisine at the quaint Niagara Falls Cafe (one of Esther’s very favorite restaurants in the entire world). Life in this world just doesn’t get any better. Esther couldn’t restrain her growing smile as the splendid details of the trip came flooding back.

Esther had been dozing in seat 3B aboard Air New Zealand flight NZ0001 bound for Auckland out of Los Angeles. She had treated herself to an upgrade to Business Premier on the twelve-and-a-half-hour flight and wanted to enjoy every minute of it. The Boeing “Triple Seven” was one helluva plane, she thought, especially the way Air New Zealand had royally outfitted and staffed its impressive fleet for these long-haul flights.

“May I bring you another glass of Chardonnay?” asked the attentive and attractive flight attendant. Her name was Naomi, and she and Esther had been chatting off and on since the plane had left the ground. Esther mused, not for the first time, that Naomi’s facial features confirmed that she had some Maori blood in her.

“Yes, I do believe I’ll have one more,” replied Esther. Yes, she was going to savor every single moment on this luxurious journey across the vast Pacific.

“I love the fact that we left Los Angeles on a Wednesday night and will arrive in Auckland on Friday morning,” Esther continued, the enthusiasm unmistakable in her high-pitched voice. “It’s just plain weird, even though I know that it is also perfectly logical. Does that make any sense, Naomi?”
“Yes, Esther, it does. I must admit that your astute observation fascinates me as well—and I make this long trip twice a month. Ah, the wonders of modern air travel and rapid time-zone changes.” As she handed Esther her glass of Jackson Estate Shelter Belt 2011 Chardonnay, Naomi added, “Remember, I’m here if you need anything. Anything at all. Just ask. On Air New Zealand, we’re always ready to cater to our Business Premier customers’ every whim. And besides that, you’re a very nice person, Esther.”

“Thank you so much,” Esther replied with characteristic graciousness, taking a small sip of her wine. Three glasses of Chardonnay was pushing her limit, but now and again, special occasions won out over temperance. Yes, this was going to be a great trip.

Not that Esther’s mind was slipping, mind you. To the contrary, her memory was as sharp as ever, despite her advancing age. As anyone who knew Esther would attest, the topic of her age was strictly taboo. Bringing it up was one of the very few things that might very well send Esther into a bout of apoplectic rage. That, and a conversation with a pretentious liberal. (Now there’s a tautology if there ever was one!) Esther could still proudly recite the names of every single member (both alphabetically and by date of seniority—take your pick) of the Old Bunbury Golf Links & Reading Club, the very prestigious and ultra-exclusive private club that had employed her as a waitress for far longer than she, or anyone one else, dared openly admit. She knew, at any given time, who was boinking whom as well as when, where, and why. She knew the exact net worth, dark family secrets, and furtive desires of everyone associated with the club for the past half century. Esther could rattle off the names of the Old Bunbury presidents as quickly as she could the presidents of the United States. (She always stopped at George Walker Bush. For Esther, as for the vast majority of rational, freedom-loving Americans everywhere, Barack Hussein Obama just didn’t count.) In short, Esther knew far, far more than was necessary to guarantee her lifetime employment at the club (should someone ever be so foolish as to actually try to get rid of her). Esther was more of a fixture at Old Bunbury than the seedy mauve and tan tartan divan that, for the past five decades, had unceremoniously graced the purposely nondescript entrance foyer to the club.

This time, in fact, Esther was going to New Zealand compliments of the Old Bunbury Board of Directors of Old Bunbury. The club’s long-time president, Clive Endive Ogive IV—her absolutely all-time favorite Old Bunbury member, and that was saying something—had told her that this was her reward for solving the hideous murder of Alfie Johnson. (Esther, as you might have expected, had already known about the Board of Directors’ largess in this regard long before President Clive actually delivered the good news.) Alfie had been brutally bludgeoned to death with a five iron and hastily dumped right behind the club’s fourteenth green—the club’s signature hole, no less. It was a gruesome affair—and also an especially trying and embarrassing time in the long and storied history of Old Bunbury. To the relief of all concerned, Esther’s encyclopedic knowledge of all things Old Bunbury, her dogged pursuit of the truth, and her previously unknown but considerable detective skills had brought the entire sordid episode to a quick and successful conclusion.

As a result of her sleuthing success, Esther had gained a fair amount of notoriety, with both the members of the club and the residents of the local community. Even those members who didn’t much like Esther—every private club surely has its share of miscreants and ne’er-do-wells—began to show her begrudging respect. Not that Esther cared a possum’s patootie about any of it. At her core, Esther was an extremely private and fiercely independent person who kept mostly to herself. Although she truly enjoyed working at Old Bunbury and always had tried her very best (in her own unorthodox, quirky sort of way) to make the members happy—at least those she personally liked, when her travel schedule allowed—she also was one of those rare people who was truly comfortable being alone. Esther embraced solitude more than a Democrat embraces big government.

Over time, Esther’s newfound fame began to spread beyond the confines of the ivied walls of the club and the nearby residents’ gossip. When Esther’s sleuthing success story became known to Old Bunbury’s sister club—the Kaikoura Whaling & Sailing Club—in faraway New Zealand, it was only a matter of time before the leadership at both clubs agreed that something should be done about it. Esther’s visit to New Zealand was deemed the perfect opportunity for the Kaikoura membership to meet and appropriately honor the best waitress-detective in the wonderful world of private clubs, and plans for a personalized afternoon tour of the club (by no less than the Kaikoura Whaling & Sailing Club president himself) followed by a gala appreciation dinner were quickly put into place. Esther had at first balked but, in the end, reluctantly agreed, primarily as a favor to President Ogive. Besides, she thought, it might actually be fun to visit one of the very few private clubs in the entire world that comfortably and unpretentiously dwelt in the same rarified and lofty air as Old Bunbury.

Esther took another sip of her Shelter Belt, one of the Marlborough wine region’s most highly regarded, and began to browse the extensive movie selection available to Business Premier flyers as the Boeing jumbo jet pushed steadily on through the starry darkness.