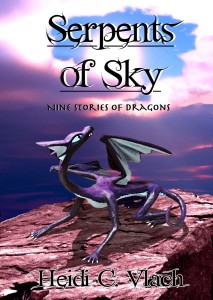 A collection of fantasy and science fiction stories exploring the many roles of dragons. Contains 9 short stories, including:

-With Less Lament. During a dragon attack on her city, an elderly woman meets unexpected guardians in her own garden.
-Cardiology. Trapped in his laboratory and running out of supplies, a scientist bioengineers reptilian creatures based on the dragons he grew up reading about. These flawed beings are his only hope for survival in the ruined outside world.
-Clearsight. Two dragons perform magical biology experiments with prehistoric Earth animals. They hope to aid the evolution of more dragons — a rare event in all the universe — but an oncoming extinction event threatens all their efforts.
-Iron Workings. A boy stands on a cliff edge, his flightsuit wings spread. His dragon captains use electric magic to force his compliance and enable him to fly — but then one of the dragons whispers in his ear about mutiny.
-In Lifetimes Spared. Once, she was a princess kidnapped by a terrible dragon. Now, she is a wise queen who calls that dragon her friend. The queen’s dream is for humans and dragons to share peace, but negotiating that peace is not proving simple.
-Raise (A story of Aligare). A novelette set in the magical, human-free society of Aligare. Tenver, a weasel-like ferrin, accidentally trades away the eggshells his adoptive mother Constezza hatched from. Those eggshells are any korvi’s most precious possession. Determined to fix his mistake, Tenver enlists the help of Judellie, a korvi just finding the courage to leave home on her own wings.