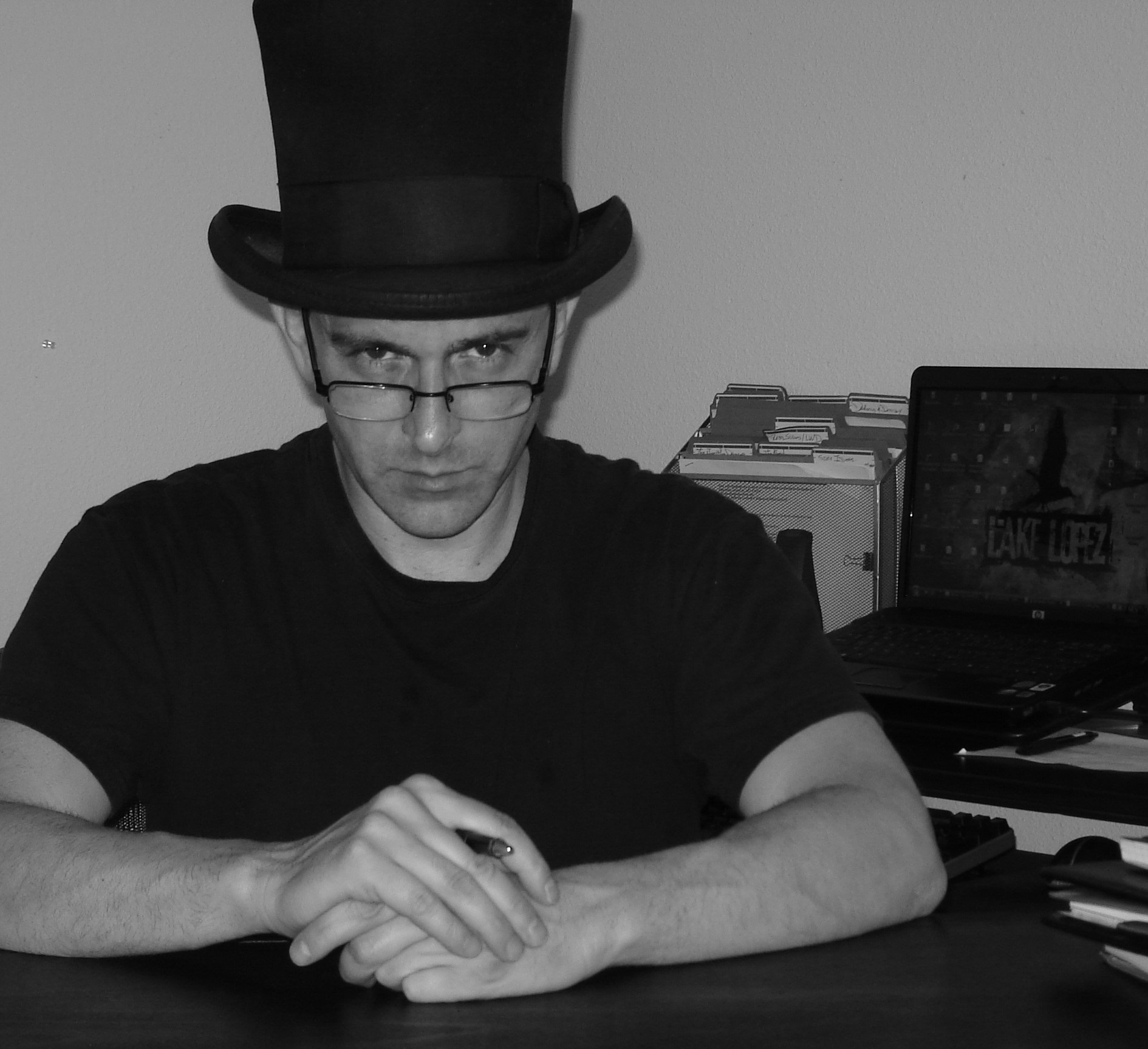 Self-Publisher’s Showcase: Today we are joined by Lake Lopez, author of Thorns in Dark Places. Welcome to our Showcase Lounge, Lake.  For any of our readers that haven’t come across your work previously, can you take a moment to tell us all a little about yourself?

Lake Lopez:  I’m the grown up version of a quiet boy in glasses. I ruined my eyes reading by flashlight because the books I found were better than the real world any day. The stories that made the biggest impression on me always had a horrific villain in them. This did something to my psyche, I believe, and my imagination remains twisted. I’m grateful for that.

LL:  I really like that question. I suppose the perfect conditions for me would be a long chunk of uninterrupted time with an accomplice keeping me well caffeinated. I never get this luxury, though. I’m writing in airports, hotel rooms and late at night all too often. In spite of these challenges I’m a daily-writer. Words and caffeine are my only addictions.

SPS: Can you put your finger on the moment that you decided you wanted to publish your work?

LL: At some point, I realized that someone had to write the books I spent all night reading. I figured it may as well be me. It only took a day or two to read a book, so writing one couldn’t take much longer… I was thirteen at the time. A year later, I met a real writer who took me under his wing. He became a writing-mentor and role model. That lucky plot-point of my youth sealed the deal.

SPS: Why do you think it is that you decided to write A Supernatural Thriller (with elements of Horror), and do you see yourself ever writing in other genres?

LL:  TiDP came about at an odd time. I’d just finished writing a novel under the working title Sinister at my blog. Every Sunday, I published a new chapter. This is a really bad way of going about writing a book, by the way. I don’t recommend it at all. Sinister took a long time to draft and I wanted something new to play with while the Sinister draft was cooling off. Luke Merrill, the young hero of TiDP, bounced into my life, told me his story, and here we are.

As for the next projects, Sinister is with a talented editor right now under the new title Zoie. I’m working on the first of a new series featuring a young man who has grown up in his family’s mortuary business. I’ve got way too many projects in the fire, to tell you the truth. They’re all priorities. I don’t see a genre change in the immediate future. I think I’ll always crave the scary story.

By the way, the ambitious Kevin Cathy just put out the first instalment of Horrendous Tales through his company, Vile Press. My short The Hungry Trees is in it. Please check it out. 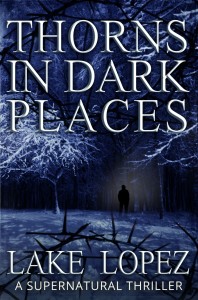 SPS: So, tell us about Thorns in Dark Places?

LL: TiDP takes place in 1959. It’s about a twelve year old boy, Luke Merrill, who loses his mom and has to live at a boarding school. He comes face to face with a monster. It’s more than a boy-versus-creature story, though. It’s a book that pokes at the quiet monsters inside all of us; sudden loss, mourning, loneliness, abandonment, all the terrors of our ragged lives. The adult readers usually lock on to the thematic elements. The younger readers just dig Luke. I don’t blame them. He’s a tremendous kid.

SPS: Where did your inspiration for protagonist Luke Merrill come from? Is there any Mr. Lopez in his personality?

LL: What a loaded question. If you sign up for the newsletter at my blog you can download a free behind the scenes look at TiDP that explores the character and the connection between Luke and Lake. Please pardon the blatant plug. Like some writers, I’m socially awkward at times and prone to blunders like obnoxious self-promotion.

SPS: Did you use a particular building when imaging the Bain Ridge School for Boys, or did you build from the ground up?

LL:  In the initial drafts I tried to show that the Bain Ridge facility was beautiful on the outside, yet falling apart on the inside. The pipes leaked. The floors were warped. The mortar was crumbling. The old school had issues – like all of us. These elements dragged the story down to a standstill. They were cut. The long answer is that I got to tour an old school, but cut the results of that research. The story reads faster and is better without it.

SPS: How well does Luke deal with the tragedy that hits him?

LL:  You’ve nailed the story’s heart with that question. The way that Luke and his father handle tragedy is the character arc. It’s hard to say who deals with the sudden death of Luke’s mom worse – Luke or his dad. When Luke fully comprehends this and sees his father as a…. All right, I’ll stop there. You’ll have to read it.

SPS: How soon does he accept that events at his new home have a supernatural element to them?

LL: The internal conflict begins as he’s left in the Headmaster’s Office. The external component come to life shortly thereafter. The school has many secrets however and they come to dreadful light slowly.

SPS: Are there any other characters that aid Luke in his battle against the monstrosity?

LL: One of the greatest things about being human is that we all help each other battle our monsters. Sometimes we don’t know we’re doing so. Sometimes we’re trying our best and failing. Sometimes we can’t see another person’s devil because of our own demons. The story holds true to that.

SPS: Have you tied up the novel, or have you left it open to future works involving any of the characters?

LL: You’re the first to know. TiDP is part of a trilogy. The Bain Ridge series features some of the characters from Bain Ridge and introduces new ones. Incidentally, the grown up Luke makes an appearance in the series I’m working on now.

SPS: Can you take a moment to tell us how the cover to Thorns in Dark Places came about, and whose handiwork we are admiring?

LL: The amazing and wildly talented Derek Murphy of Creative Indie is responsible for that cover. Derek is a smart guy with an intuitive eye. Even more important, he’s extremely generous. He’s done a lot for the indie community. If you want an indie career, find Derek on Amazon and read his stuff like its divine. He’s been there. He’s done it. He will not lie to you. He’ll even tell you how to do it without spending a small fortune.

SPS: We LOVE spending time on over at TheScaryStory.com (Lake’s Blog). Tell us why our readers should also pop by for a look.

LL:  That blog has gone through many incarnations. I’ve found that a lot of writers’ sites sound the same. We write about our current projects, the writing process, how hard it can be, etc. It’s kind of boring. I don’t mind saying this because I’ve been guilty of it. Now I’m going in different directions. I’m preparing a series of short stories, more #FlashFiction and toying with multi-media materials. It’s all an experiment with the purpose providing readers with quality horror stories. It’s slow going because at this point I’m really enjoying the new novels; and I’m maintaining a low profile to put all of my energies into them.

SPS: You mention Thorns in Dark Places being your second novel, any chance of hearing about the first?

LL: Ah, The Things We Crave… If you’re going to be a rock star, you can’t have stage fright. You can’t be afraid of taking the mic and making a fool out of yourself. I think of TTWC as that kind of book. I’m proud that I took the chance and failed so irrevocably and publicly. It’s part of the journey. That said, failure is a great teacher. Now I pay for professional editing and listen very closely to my advanced reading team.

SPS: What can we expect next from the pen of Lake Lopez?

LL: It’s a race between Zoie, the story about a boy and a demonic guitar, and The Bell Boy, the first Jacob Bell novel. I desperately want Zoie to win because I’ve lived with her cast for years now. They keep me up at night. But I think The Bell Boy will make it out of revision first. It’s shorter. May I give you the opening line? Here it is: Jacob Bell celebrated his sixteenth birthday by picking up a dead body and bringing it home. J That makes me happy.

SPS: That kind of an opening makes us happy too! Was the Self-Published/Indie-Published route always your preferred route for your work?

LL:  I spent many years writing stories organically with no concerns for plot-points or milestones. Of the half dozen books that came out of it none of them were worthy of a reader’s time. Now, I’m happy to be able to connect with readers in any way I can. I’ll be happy to live as an indie for the rest of my days. The community is vibrant and supportive. It’s a good time to be a writer. However, I’d be happy to leave the publishing, formatting and design aspects to someone else and concentrate on the stories.

LL:  I’m blessed. I’ve earned some amazing readers. Seriously, they’ve blown me away with comments and insightful questions. It’s been more than I expected, especially from a small book about a grieving boy.

LL:  Every writer should live with this four word mantra: Now Is the Time. You can be disappointed in your writing career or you can decide to be bold; write a book, give it to the world, succeed, fail, get rave reviews, get hated, win, lose and learn from it all. Decide you’re going to be a writer. Sink your fangs into it and drink well.

LL: I just started reading Duck by Stephen Parolini. I admire his elegant prose. His book opens with a badly packed bomb falling out of the sky. That’s my kind of book, for sure. I’ve read everything that James Hankins has put out. My favourite Hankins novel is Drawn, probably because of the supernatural elements. Both of these guys are, as I understand it, indie writers. Keep an eye on them. Expect great things.

In the non-indie world, I’ve become a fan of Masha Gessen. I’m reading an autographed copy of The Man Without a Face, the Unlikely Rise of Vladimir Putin. It’s a fascinating read and Gessen’s style reminds me of Rosellen Brown. I get the feeling that if Gessen wasn’t a journalist, she’d be redefining literary fiction.

SPS: Thank you for joining us today Lake, and all the best for the future.

LL: Thank you, my friend. I’m honoured to be here. Please know how much I appreciate your support. You’re a huge gift to the indie world.

SPS: For more information on Lake and Thorns in Dark Places, please do visit his Showcase Author page here.