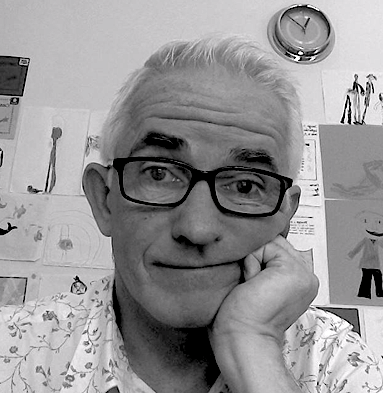 Self-Publisher’s Showcase: Today we are joined by David Milligan-Croft, author of the romantic novel, LOVE IS BLOOD.  Welcome to the Showcase Lounge, David.

David Milligan-Croft: Thank you for having me, it’s an honour.

DMC: I’ve worked in the ad industry for over 30 years as an art director and writer. Which basically means I come up with ideas for adverts. I’ve been writing since my mid teens. Starting with poetry then moving on to short fiction, screenplays and finally, my novel. 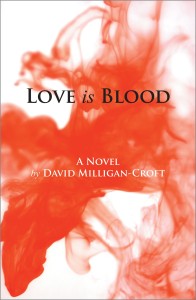 SPS: We’ll start with your most recent work, Love is Blood. Is it fair to say it’s not your typical Romance novel?

DMC: I hope not. Whilst I wouldn’t class it as literature, I don’t think it’s chick-lit either. I think my background in advertising means that everything I do needs to contain an idea at its heart. Love is Blood is no different. The basic idea is: what if, when two lovers are brought together by chance, they are actually half-brother and sister? The story is how to unpick that conundrum. How they met, how they cope, how did this ever come to be. So, the bigger story is destiny and the interconnectedness of the universe and everyone in it.

SPS:  Where did the idea for the novel come from, did it come together from a series of separate ideas or did you have the complete story from the start?

DMC: I have always been fascinated about how and why people we like/love come into our lives. All the things that have to happen in order for them to do so. Not just in our own lifetime, but generations previously. And not just things we think are relevant to us – but the obtuse. (Like Pascal’s act of terrorism.) We think we are independent when, in reality, so much of our lives are shaped by things outside of our control.

SPS: The novel flips, chapter by chapter, between the years 1969 and 2000; did you write it in such a way or was it more a case of two separate stories later being merged together?

DMC: I wrote it as you see it, alternating chapter by chapter. But I had to be careful and keep rereading each story separately so that they did actually stack up as linear narratives in their own right. (Until they converge at the end, of course.)

SPS : How did you find tackling the subject of (potential) Incest?

DMC: From a pragmatic point of view, I had to do quite a bit of research into genetics and testing. I didn’t want readers to say – why don’t the couple just have a DNA test? (Which, fortunately for the story, they can’t. They need one or both parents too.) On an emotional level, I wanted to explore how young lovers would cope with such a bombshell as committing incest. On a psychological level, I like to be provocative and talk about things that are considered taboo – to ask questions of the reader.

SPS : Can we expect to meet Dominic and Sylvia again in future works or has the whole story been told?

DMC: I doubt it. Though, I did wonder about a sequel involving their potential offspring and how they might be affected genetically.

SPS : What would you like readers to take away from the experience of reading LOVE IS BLOOD? Or, do you prefer to see people decide for themselves?

DMC: How interconnected everything and everyone in the universe actually is. And, because something is taboo in our current culture, does it mean it should always be that way? After all, societies in the past have had incestuous relationships 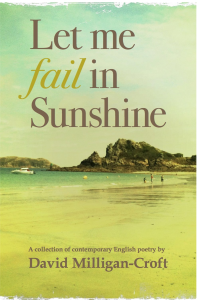 SPS: Prior to LOVE IS BLOOD, you released two previous works. Firstly, can you tell us about your poetry collection, LET ME FAIL IN SUNSHINE?

DMC: As I mentioned, I’ve been writing poetry since my mid teens. It wasn’t until my late twenties that I discovered my voice. LMFIS is a collected works from the past twenty years covering themes such as childhood, environment and love. My inspirations are Raymond Carver, Charles Bukowski and Paul Durcan, all of whom have very conversational styles of writing. Also, Irish writer, Patrick Chapman, with whom I worked in the 90s. He was (and still is) a constant source of encouragement and criticism.

SPS: Do you have a favourite poem in the collection?

DMC: That’s a tricky one. I have quite a few, otherwise they wouldn’t be in there.

SPS:  Do you still write poetry and if so can we expect future collections?

DMC: Absolutely. Poetry is my first love. I haven’t written any for a few months now because of the novel and screenplay. And, probably because there aren’t any poems in me that want to be written at the moment. 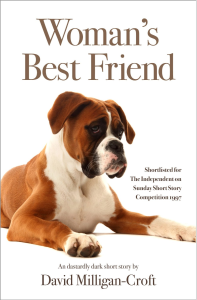 SPS: Secondly, you released a short story, entitled WOMAN’S BEST FRIEND. What could someone expect if they went and picked up a copy?

DMC: Hopefully, they’ll think it’s funny and macabre in equal measure. But it’s also very tender. It’s about a boy trying to come to terms with love and loss. WBF was real stream of consciousness writing. I have Oonagh Young to thank for that story ever happening.

SPS: Did you find any limitations writing in the shorter form?

DMC: Not at all, it’s very liberating. I started writing short fiction long before I ever attempted a novel, so I’m quite used to it and enjoy it immensely. Every word has to move the story forward. Some of my favourite writers are masters of short fiction: Salinger, Carver, Proulx…

SPS: Now would be a good time to ask if you can let us in on what we can expect in the near future from yourself?

DMC: I’m going to publish a collection of short fiction early next year, which is partly why I published WBF as a taster, to gauge the reaction to it. I’m also going to publish a screenplay in the coming weeks. It’s a historical epic, set just after the first crusade, in 1100, when a French Crusader Knight discovers The Book of Judas, which has the potential to turn Christianity and Islam on their heads. Suffice it to say, a lot of people would like to get their hands on The Book.

SPS: We like to spend a moment looking at an individual’s book covers. Can you tell us about how the cover to LOVE IS BLOOD came about?

DMC: I didn’t want anything clichéd like a soft-focus girl in a pretty dress. The image of swirling blood seemed more appropriate for the couple’s intermingling blood, atoms and molecules of the universe. Plus, it stands out in that genre.

DMC: Not really. I tried getting an agent and also sending my work directly to publishers. I did have representation by Peters, Fraser & Dunlop on the back of a film option I had secured myself for Woman’s Best Friend. But it soon became evident that they weren’t really interested in promoting my other work so I chose to end the relationship. With the meteoric rise of e-publishing, it seemed a waste to let my work sit on a hard drive gathering pixel dust. The downside is a lack of editorial input/advice.

DMC: Write for yourself, not an audience. And, never give up. Ever. (Sorry, that’s two pieces.)

DMC: The aforementioned writer, Patrick Chapman. Not only is he a great friend, he’s a tremendous source of encouragement and inspiration. He’s also the author of half a dozen collections of poetry, a brace of short fiction and a whole host of film/TV work.

SPS: Thank you for joining us today David, and good luck in the future.

DMC: Thanks for asking me.

SPS: For more information on David Milligan-Croft and his work, please do visit his Author page here and if you have read and enjoyed this interview we’d love you to comment below.