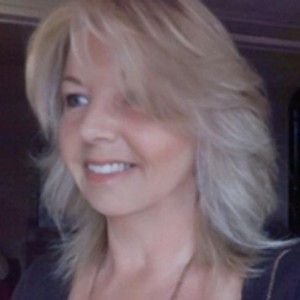 Julie Nicholls is an English author. She writes in Fantasy Romance, Urban Fantasy, Erotica and Adult Fantasy Romance. She has been living in Bulgaria for the last 11 years with her husband, Ian. They moved to Bulgaria for a quiet life, and then Julie discovered she liked to write. She started writing Fanfiction, and short erotica, and then released her first, full novel in November, 2014. Julie is also a digital artist, and creates all her own covers – most of which are digital paintings. Her creations are widely sought after, and she offers a book cover service on her official website. Writing and painting or creating art is her passion. She loves animals, especially her two German Shepherds, Kira & Mishka. You can catch up with Julie on Facebook, Twitter, Google+ and her own website. 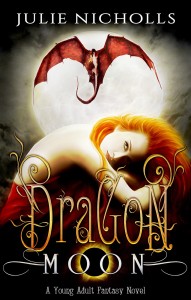 Save the dragons, unite the races, no sweat.

I’m nineteen and wish I had a clue about my future. Instead of my own bed, this morning I woke in the strange land of Lur Neval. My name is Scarlett, but the Nevalese call me Dragon Mage. Seems it’s my job to preserve the all-important dragons and oh, while I’m here, bring peace to the warring clans. Piece of cake if I can outwit Madoc, the manipulative, evil seer who wants every dragon destroyed. Whatever it takes, I’m here to fulfill my destiny under the light of the Dragon Moon. 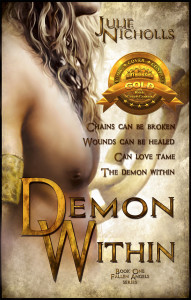 Do you want a story you can’t put down? Filled with plots, secrets, and characters you’ll fall in love with together with sizzling steamy bedroom scenes?
Demon Within should be on your ‘to-read’ list. WHY? Because it has all of the above.
A former slave who is now a feared warlord, a princess, a king, angels and fallen-angels make this an epic romance you will love from the start.
When the Seraphim ruled the heavens, a vain angel dared to risk everything for the love of a human and paid the price of eternal damnation.
Sold into slavery when he was six years old, Kai has never known love. As a grown man, he rebels and becomes the ruler of Blackhill where he rules with a firm hand. Now he needs alliances and a wife.
King Garlan from Brightstone sends his envoy to request an alliance with the infamous warrior. The agreement is to offer his daughter’s hand in marriage, Princess Eloise, in exchange for Kai’s support. Kai instantly falls for the beautiful princess and soon discovers he’s not the only one with a secret.
The princess holds a power gifted to females on her mother’s side by the seraphim.
Can Eloise save Kai and the town of Blackhill from the destruction of the fallen angel who is attacking the towns looking for revenge? What does the future hold for them?
Join Kai and his friends on an epic journey which takes you in to a world of angels and the fallen. 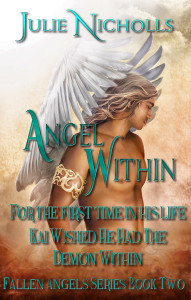 An epic fantasy romance – Angels, Fallen Angels, Witches and Magic
Angel Within, a story of angels and fallen angels continues from the first book in the series, Demon Within,
Kai of Darkmide, a once feared warlord and Eloise of Brightstone, a timid princess, face danger once more from the fallen angels who seek revenge on man, although this time there is an added complication when the fallen are aided by a witch.
Jana, a powerful witch, and Tigan, a deceitful mercenary from Sabe and Kiera’s past, join forces to summon Samyaza, one of the most powerful of all fallen angels. The witch strikes a bargain with the fallen angel to possess Tigan, making him indestructible in battle.
Sian, a young witch, naïve but powerful, aids our trusted warriors, and in doing so is given refuge at Blackhill. Reluctantly becoming entangled in more secrets, she listens to the advice of Nazar, a new warrior who recently joined with Sabe and his sister, Kiera.
Kai and Sabe join Brightstone and Blackhill’s forces to rid the world of the powerful witch, and Tigan. Once again the seraph comes to the warrior’s aid, yet at what cost? The final battle culminates with the transformation of Eloise from a timid queen to a feared warrior as her husband fights for his life, and freedom from bondage once more.
The story continues and is not just a romantic tale of a princess and a slave. This epic story has another chapter to reveal and only in the final book will it become clear who controls man’s fate on earth.
Get ready for the battle between good and evil, angel and fallen angel, and learn what the heavens have in store for Kai and Eloise. 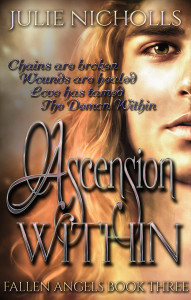 The story continues from book two, Angel Within, where we left Eloise in a state of unrest at Kai’s disappearance.
Can Eloise save Kai? If she does, is he going to be the same man she fell in love with? Or will he revert to his old persona? Confused by overwhelming emotions of despair and betrayal over losing her lover, Eloise finds inner strength and rages with determined purpose to aid her husband’s return.
Together with her comrades and the angel, Anael, she makes her plan to rescue Kai, but as always when dealing with angels, it is not so easy. The angels are cooking more plots and schemes; they just won’t leave the mortals alone! Anael reveals additional secrets regarding Eloise and Kai’s past, and she’s angry and hurt. Lashing out at the Angel, she condemns his actions and his interference’s with the lives of mortals.
The battle is on to release Kai, and to save the souls of man from Nivel, a dark angel. He’s playing a dangerous game and the prize is all of humanity.
The witch Jana is aiding Nivel. What deceit is she planning this time after hiding her intentions in Angel Within? Nivel strives to win a game he and Anael started over 25 years ago, but who has the better team?
You will learn everything in the final book, Ascension Within, book three in the Fallen Angels Series.
Ascension Within has more secrets and plots, just as with Demon Within, and Angel Within. Together with sensual, erotic bedroom scenes, and an adventure that will keep you guessing, you will be riveted to know the conclusion of this saga.
The Fallen Angels series is a story of love, passion, good overpowering evil, and loyalty. INCLUDES ADDITIONAL BONUS MATERIAL. 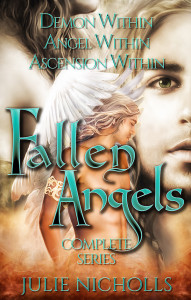 The story of Kai, who was sold into slavery at the age of 6 by his mother. Raised by slavers who put him in the fighting pits of Darkmide after they learn he has something inside which makes him invincible in battle, they use him for sport. He learns that killing brings rewards. After years of servitude at the hands of the slavers, Kai breaks free and mounts a rebellion, earning a reputation as a powerful Warrior. An alliance between a king, sets him on a path he could never imagine. After meeting the king’s daughter, Eloise, they build a relationship and discover secrets about themselves and the world around them. The second book, Angel Within brings more trials for Kai and Eloise, and a powerful witch joins forces with a mercenary from their past to bring forth the most powerful of all Fallen Angels, Samyaza. Book three, Ascension Within… the conclusion of this story gives us all the answers we’ve been waiting for. The angels have been playing a game, one that could end all humanity. Will the mortal world survive the game played by powerful angels? 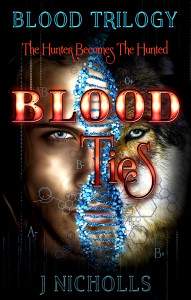 The hunter becomes the hunted…

Keagen was tall, muscular, and stronger than most men were, although he wasn’t exactly a man. His genes were human DNA with a hint of animal, courtesy of Solgen Laboratories. It wasn’t common knowledge what the company did, and their labs were all in secret locations. Only their financial backers knew where they were. Who supported them was unclear. Possibly the government, private military organizations, or even wealthy dictators; no one knew. You would not find any documentation about it. It wasn’t legal what they were doing, that’s for sure.
Keagen tracked and hunted escapees and always caught his prey, but just one eluded him. Gabriel, a lycan.

K 3 4 G E N is Solgen Laboratories number one hunter. He’s genetically enhanced and has a high IQ, heightened senses, and thanks to lycan DNA, he is stronger and faster than any man. It’s taken him a year to find Solgen Labs most wanted escapee; Gabriel, a lycan, and K 3 4 G E N is finally bringing him in, but despite his one hundred percent retrieval rate, his title and life are about to expire.
The labs have created a new hunter, a female. G H 0 5 C T – She’s faster, stronger, and has a new genetic enhancement that gives her the edge. She’s a trained killer, and is eager to replace K 3 4 G E N, robbing him of his title and crown.
Feeling betrayed, K 3 4 G E N turns to his enemy, Gabriel. He hands Gabriel a file containing details of his sister, who was executed at the hands of Dr. Keller, the founder of Solgen Labs. Seeking an alliance, he offers to help Gabriel find out what happened to his sister.
Gabriel must make a choice; trust the hunter, or run and hide as he had done previously. 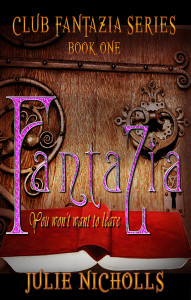 Elsa is a hardworking, single 35-year-old woman who loves to read paranormal books. She hides herself away and lives every moment with her book boyfriends, and as long as she has a never-ending supply of them, and wine, she appears to be happy. At least, that what she tells herself. She’s brash and a control freak, constantly stressed and a bit of a bitch. Once her workday is over, she retreats to her apartment and escapes to the fantasy land of her books, avoiding relationships despite secretly yearning to be involved with someone. It’s only after she meets Jasper that she learns she needs therapy. But this is a different kind of therapy – there’s no psychiatrist.

At Club Fantazia, Elsa comes face-to-face with her fears and has to get over the inhibitions that hold her prisoner. Club Fantazia isn’t just any club, though – it’s invitation only – and once you’re in, you learn its secrets and will never want to leave.

Fantazia is the first book in this series, where you will learn about what goes on in this secret club. The owners and workers are not like anyone else you’ve ever met.