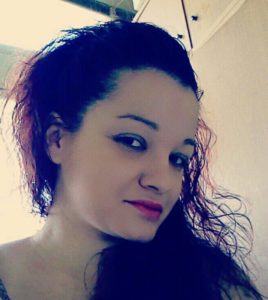 Konstantina likes to think her writing skills are diverse as she jumps from author to playwright with ease. She was born in 1988 in Korinthos, Greece, and soon after her family moved to Lefkada where she grew up until 2006 when she relocated to Athens for her studies. She has a BSc in Physics, an MSc in Materials Science and currently, she is studying for her PhD in Physics. In 2013, she got her Diploma in Scriptwriting for TV, Film, Stage and Radio. Her previous work consists of four plays performed at various festivals in Greece, dealing with historical events or traditional life values and on a voluntary basis. Her professional debut came when her short story “I wish you had stayed” was published in Centum Press’s anthology “100 Voices Vol. 2” on January 2017. Her debut novel “WolfHeart”, a new adult, paranormal romance, was published in November 2017 after more than a year of hard work, both in Kindle and paperback forms. More details about her writing can be found on her blog konstantinasays.wordpress.com alongside movie and book reviews and some thoughts on the writing process. Follow her on twitter @konstantina88p to keep up to date with her work. 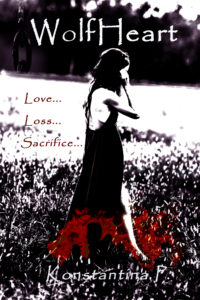 In the middle of the war between two powerful species that revealed the supernatural world to Humans and left the planet spiralling out of control and straight into a medieval status, two people try to find their place among their kind and with each other while battling not only the circumstances but their own nature too.

Steven -a Werewolf Prince- inherited his Alpha powers after murdering a rabid wolf about to kill an innocent teenager. In doing so, he disrupted the equilibrium inside his family´s pack where the power should pass from mother to daughter. Now, with both him and his sister Jen being Alphas and laden with guilt, Steven has to keep his head down and follow orders; play the good soldier in a war he detests.

Cora -the Magic Princess- was born the first year of the war and is believed to be the most powerful Magic that has ever walked the earth. Instead of being used as a weapon by the Magics, she hasn´t made an appearance for years, a fact that makes the Werewolves suspicious. When the Magics start breaking the peace treaty, Jen is forced to seek out a leverage so she sends Steven on a mission that will take him and his pack out of pack land for the first time, searching for the foreign Princess. The Anders Werewolves though cannot survive long outside their land and Jen hates Magics with passion after they kidnapped and killed her mate. Wolves mate for life so, determined to take her revenge, Jen leaves her brother to struggle with his own morality; save a girl who has spend her entire life being tortured by her own people or keep quiet and maintain his position at his sister´s side, keeping their people united?

Werewolves and witches, two perpetual enemies, are forced to make choices that will uproot them and break every safety net they have built around them. Through a journey of love, loss and sacrifice, a new era will begin that, even if it will not make the world a better place, it will give hope to the most desperate.