Born in 1957, in Huntington, on Long Island, Marie J. S. Phillips, was driven by an insatiable love of writing, art, and the sciences since very early childhood.

Her love of animals and nature fueled her desire to create, which always appeared as stories from a non-human point of view. She invented her very first character at six years old, creating picture books with a tree as the main protagonist, with her very own publishing logo, complete with rainbow and shining sun.

In college, she majored in Art and Earth Sciences, where inspiration fired her vivid imagination, planting the seeds for her Furlites of Aroriel novels, drawing her into the unique and futuristic world of Fantasy/Science Fiction.

Over the years, she developed THE FURLITES OF ARORIEL stories. She wrote during breaks at work, at night at home, in any bit of spare time she found, honing the complex world of this alien family saga. Buying a home and marrying her High School beau never stopped the steady, but slow evolution of this epic tale. Other hobbies such as showing, collecting, customizing model horses, gardening, and photography, integrated well with her mission to complete her books, spawning THE SECRET LIFE OF MODEL HORSES.

The passing of Marie’s first Maine Coon cat, a dapper tuxedo named Demon, affected her deeply and influenced her writing. This charismatic cat appears in EARTH-BRED, MATISSIA-BORN, as a special genetically altered feline character, who, like his real-life counterpart, steals the show. He also influenced a character in a short story in THE WHITE DRAGONS OF SUVWILUR & OTHER TALES.

Meanwhile, as Marie used her second big Maine Coon as a character in another tale, Khan became seriously ill. While battling Khan’s insidious disease, she completed KHAN:A MAINE COON, which took on a deeper impact far beyond her intended feline fantasy yarn.

In OLD GENT, Marie returns to the roots of her writing life, penning this semi-fictional biography about a beloved Norway Spruce tree, showing his long life, as only she can, from the tree’s point of view.

Owned by four cats, three of which are Maine Coon cats, Mrs. Phillips and her husband live in the rolling hills of northwestern Connecticut. 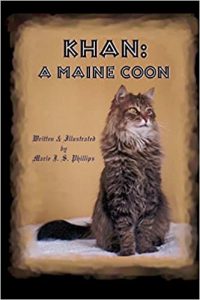 Semi-fictional biography of Khan, a real Maine Coon. Abandoned and left at a local shelter, a Maine Coon kitten awaits an uncertain fate. During his stay, Khan befriends a wise old tomcat. Four days later, to Khan’s horror, the shelter workers take his friend away to the Big Sleep, leaving Khan scared and alone.

Just before Khan’s time is up, a man enters the shelter and adopts Khan. Though he feels loved, he is also alone, and misses his mother, his litter mates, and his tomcat friend. Weeks later, when another young kitten, Phantom, joins the household, Khan befriends him, and they form a tight bond.

Khan deals with life’s challenges and surprises, always finding strength in feline friendships, old and new, and in love from his humans — until a monster from within suddenly strikes him down in the prime of life. Down, but not out, Khan struggles against his internal foe, wanting only to stay beside the humans and cats he adores. 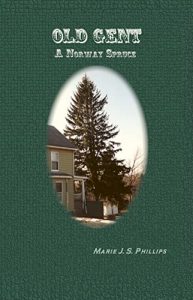 Sprouting in an old, abandoned field around 1895, Old Gent, a Norway Spruce, grew into a majestic towering specimen of his species, protective of the old home he saw built on his lands as a stout sapling.

Human activity amused, startled, frightened, and sometimes hurt him, thus he never found trust in the beaver-like species, until the fifth owner in nine decades moved into the old house he sheltered. The woman and her spouse proved reverent, changing his attitude towards humans. The old tree experienced new emotions and gained the name of Old Gent. When terror from the skies threatened the lands, he stood strong, determined to shield the home and owners he now loved and paid a price. As decades weakened his ancient body with internal decay from injuries, he fought to regrow lost limbs, racing to once again tower into the skies. He spiraled a few seeds against the foundation of the old house, where his offspring sprouted. On his fateful felling day, one stood poised to continue his sire’s legacy

The White Dragons of Suvwilur and Other Stories (Fantasy, Science-Fiction) 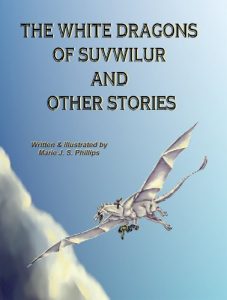 Tales of fantasy and science fiction. In these pages, follow the short tales of creatures as diverse as Feklaar, the white dragon forced to first contact with the dangerous Humans on his world, Princess Tulitara of the Unicats, who is kidnapped. and an appaloosa Pegasus who triumphs over his insecurities as he comes of age, shown from their points of view.

Quick fun reads, they take the reader more worlds of the fantastic, from the dark tale of Kaekodemon, who is murdered and returns as a spirit to enact revenge on her killer for her kittens, to the fun, lighthearted Keeper of Word, a tiny winged equine who wakes, unable to recall who she is.

The Furlites of Aroriel: On Matissia Wings (Book I) (Science-Fiction) 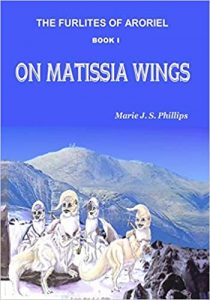 On the cold distant world Aroriel — where primate species never developed — evolution spawned a furry saurian race that now reaches for the stars. Commander Geupetus of Clan Darius, offered command of the first near-lightspeed starship, hesitates to take the job, as Furlitian Law forbids his teen-aged twins Murkuria and Thorius from accompanying their Clan on this historic mission into interstellar space.

Clan Darius, after careful deliberation as a family, driven by their rigid sense of military honor, discipline, and duty, decide they must squelch their emotions and accept the commission – leaving the twins on Aroriel. But the paradox caused by the Clan’s traveling near the speed of light means that IF the twins ever see their family again, they will be older than their parents!
Distraught, Thorius conceives an outrageous plan to stow aboard the great starship. He and Murkuria steal a shuttle, and whiz off, determined to reach the Space Center before dawn launch. With the help of Iggie, Murkuria’s pet Matissia, they sneak aboard the starship, inadvertently causing the Sunpyne to crash land on an alien world, where dinosaurian life like their own is long extinct, and strange primate beings that call themselves Human populate the planet.

Following a violent first confrontation with two natives, they race to repair the ship. A second meeting, with a family camping out in the wilderness around the ship, results in friendship, and information exchange. However, after their Human friends leave to return to a distant home, the Human military locates the downed starship, just after they complete full repairs. Geupetus powers up the ship, but suddenly realizes his twins and one Cadet are not aboard. With enemy warcraft peppering the area with arms fire, and unable to lower shields to recover his children and crewmate, Geupetus refuses to leave without them. Will the furlites ever see their beloved home again? 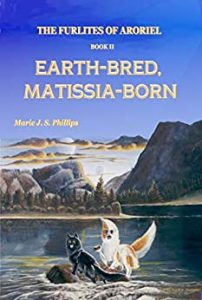 Young Murkuria discovers that the homeworld-bound Sunpyne harbors yet another stowaway. This time, it is the Human’s lost pet Maine Coon cat, which is pregnant and dying from malnutrition. The alien creature threatens to abort her young, unable to supply proper nutrition.

Murkuria races her to the Medical Bay where she and one of the Ship’s physicians take the zygotes and place them in stasis, after which Murkuria convinces her father to turn back to return the cat to her planet.

During the following cinths, working hard despite failure and despair, Murkuria succeeds in genetically altering the Earth cat’s unborn zygotes so they can thrive on Aroriel’s magnesium-rich foods.

Seven kittens — born to surrogate mother Iggie the Matissia — wreak havoc aboard the homebound starship, and Commander Geupetus is ready to lock them up in cages for the rest of the trip. But at three cinths old, the kits bond to and communicate telepathically with Furlites of their own choosing, averting that sad scenario. These exotic smart treasures which Murkuria dubs Felakoons, endear themselves to the proud Clan, proving to be far more than mere pets.

However, as the Sunpyne and Sauri return from their first mission to the stars, anticipating awe, triumph, and glory, unexpected opposition to the new “alien” life throws the planet into strife and conflict such has not been seen in centuries, thanks to Murluria’s childhood nemesis, Kutius. Now a grown man, he instigates the fight to keep the abominations off-world.

Will the Felakoons earn a place in Furlitian society, or be sterilized, and die out as a species before have barely begun to live? 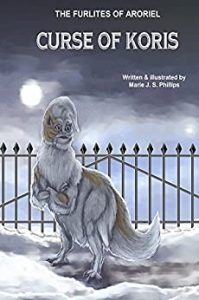 After his mother and grandmother have a nasty argument, young Kutius and his parents move to the small town of Gabbruss in the State of Burstal, a place very different from the open farmlands he grew up on. Upset and angry, the youngster hates his new hometown, longing for the happy home of his grandmother, filled with loving clan and domestic animals.

Upon meeting new classmate in Fundamental school, Murkuria of Clan Darius, a feud explodes between them. It escalates over the years, until a fight between them causes Kutius’ expulsion from school. His mother blurts out the family secret, and Kutius blames Murkuria for his predicament. She becomes the bane of his existence, until she stows aboard her Clan’s starship, disappearing from his life.

He feels relieved, and life settles down until Kutius and his mother suffer the dire consequences of admitting the Clan secret. All descended from Koris the Tyrant must be sterilized, and Officers come to enforce that law at the worst time. His family loses their cozy home and end up living in a dirty old bunker converted to a house. Kutius puts full blame on Murkuria and hopes her clan’s ship wrecks out there and never comes home.

After graduating Preparatory school, Kutius, despite the bias against who he is, improves his life, leaving the musty home he abhorred. He finds peace in the city of Astrolis, until the Starship, thought lost, returns, carrying back into his life the girl he despises. His hatred rules him, and he connives to hurt her, her Clan, and the Felakoon abominations she created out between the stars and brought home.

At a large Hearing, where he accompanies the Governor of Burstal for whom he works, he tries to stop a Felakoon kit from bonding to the Governor, and Hellara reacts with fury, reminding the world who Kutius is, in front of the entire populace on worldwide video. Tossed of the grounds, he leaves the city, angry and hurt, but as he travels to escape his old life, a new one opens to him, and, despite the trials, proves to be full of extraordinary surprises. His only thought, when will that Darius girl drop in and ruin his life again?