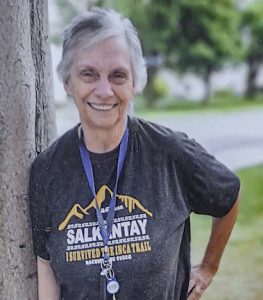 A writer, a traveller, an adventurer, a dog mom—that’s Marsha, who loves to explore the world from prehistoric sites right up to today’s. Over recent decades, she has explored the Americas primarily and that travel has been one of many things inspiring her writing. She is especially in love with Peru and Guatemala, the countries where she’s have spent the most time.
For her 40th birthday, she decided to trek in Peru in 1987. Besides being amazing, that journey planted the seed for her novel, Dance Me a Revolution. It was a two-minute conversation between her and the guide at just over 16,000 feet. Ana Maria was waiting for her—as usual she was the last to struggle up the trails to the evening’s camp. Their conversation went like this:
Marsha: “You went to university, right?”
Ana nods.
Marsha: “What did you study?”
Ana laughs: “Oh we were all revolutionaries then. They closed the university.”
Yes, it did take her three decades to find the way to write the story, but she thinks the time helped her write the best thing she’s ever written. Since then, she’s travelled back to Peru eight times, and been blessed by the wonderful Andean people she met, became friends with, lived with, volunteered with, helped build new schools with. She thinks of the Andes as a second home for her heart, though Canada remains the first.

Dance Me a Revolution (Literary Fiction) 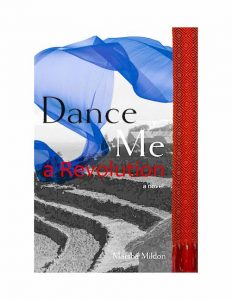 Set in the lofty Anaes mountains, Dance Me a Revolution follows former terrorist and current tour guide Rosa Amaru as she struggles to reconcile her intense longing for her rebel lover and the revolution that could return the Incas to power with the reality of 1980s life for Andean peasants. Although still a captive of her troubled past, she must lead Canadian videographer Kelly Davis and American coastguard Tony Comeau through the wild beauty of her colonized homeland for her family’s tour company. But this will be no popular tourist trek to Machu Picchu; instead, it threatens to destroy Rosa, her family, and the trekkers’ lives, as together they dance their way through a world of shifting morals and identities.
An adult literary novel exploring how people make decisions during times of extreme change, Dance Me a Revolution might be seen as a cross between The Poisonwood Bible and a more violent Bel Canto, with a touch of adventure travel thrown in.