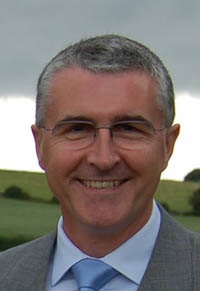 Martin was born in Carlisle, England in 1964. He didn’t catch the writing bug however until adulthood when he was studying the life of an ancestor. It was never his intention to write about his great-great-grandfather (a nineteenth-century soldier) but he found so much information that he thought his story might make an interesting book. The book was well received locally and Martin’s writing career was underway!
He lists Conan Doyle’s Sherlock Holmes and John Watson as his two favourite literary characters, so it was almost inevitable that he was drawn to period crime fiction, first by writing a Holmes pastiche, set in his home city.
In The Adventure of the Spanish Drums, Martin introduced his own detective. He explains, “When I wrote the Holmes pastiche I deliberately didn’t make my local detective a buffoon, like in so many Holmes stories, because I wanted to give him some adventures of his own. Detective Inspector Cornelius Armstrong was born!”
Now, with over ten fiction and non-fiction books to his name, Martin lists his home city as one of his great inspirations. “Carlisle is such a historic city. It has over two-thousand years of history dating back to the Romans – if you can’t find something there of interest there’s no hope for you!”
This all led to him combining his interest in fact and fiction in the Armstrong canon. It’s to his home city he makes his final reference, “Celts, Saxons, Vikings, Romans, Royalist, Parliamentarians, US Presidents and The Black Death have all visited Carlisle – why don’t you give it a go?” 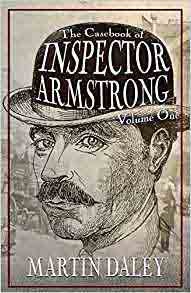 Cornelius Armstrong is a Detective Inspector in Edwardian Carlisle. In the first of these two adventures, Armstrong investigates the brutal murder of a young Italian immigrant on the corner of West Walls and Dean Tait’s Lane in November 1903. In doing so, Cornelius uncovers a far wider web of underworld crime. In the second case, the reciting of ghost stories in front of a blazing fire at an innocent Christmas party, inadvertently leads the detective into a trail of betrayal and deceit that dates back some six hundred years to the death of King Edward I on Burgh Marsh. 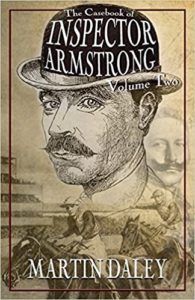 ‘The Bells and Plate Fix’ is set against Cumberland’s biggest horse races, the Carlisle Racing Bells and the Cumberland Plate. When a bookie’s clerk is found face down in the River Eden, Inspector Armstrong believes there is more to his death than meets the eye. In ‘The Kaiser’s Assassin’, Armstrong’s holiday in the Lake District is disrupted when he is invited to meet Kaiser Wilhelm, who is visiting his friend, the 5th Earl of Lonsdale at Lowther Castle. A potent mix of characters leaves Armstrong feeling uncomfortable and as things threaten to spiral out of control over the following days, he faces a race against time to prevent a murder that will have repercussions across Europe. 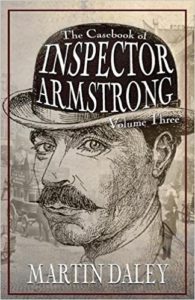 An unknown American tourist, who will one day achieve greatness, visits Carlisle to research his family history. His arrival coincides with Inspector Armstrong’s investigating of a macabre series of grave-robbing incidents in the city. The detective’s enquiries inadvertently lead him into investigating a case that had lain dormant for over seventy years.
The second case is set against the backdrop of the Great War. With the building of the enormous munitions factory at Gretna, Cornelius is faced with the impossible task of controlling thousands of navvies who built and work at the factory, intent on coming into Carlisle on a nightly basis to drink away their disposable income. Labour unrest, Irish sectarianism, women’s suffrage, and the Government’s State Management Scheme are all issues, that when combined, prove every bit as explosive as The Devil’s Porridge.