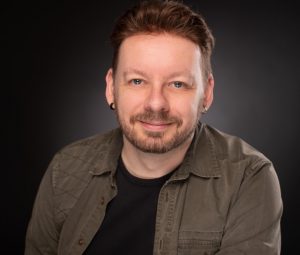 They say if a monkey is hitting keys at random on a typewriter keyboard for an infinite amount of time, they will ultimately end up with the complete works of Shakespeare. If you put a kid of about 8 years in front of an old Commodore computer and let him type things into computers from that moment on for the next couple of decades, you end up with Matt’s debut novel BLACK KNIGHT, a work of fiction that incorporates many autobiographical traits.

Born the youngest of three children, he was probably destined to be the odd one out. He has worked in the video games industry and as a freelance software developer. Now he has finally given in to scratching that creative itch and is working on more adventure novels in the world of BLACK KNIGHT.

He lives in Hamburg, Germany. 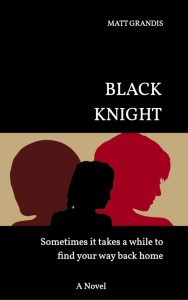 “I know you’ve always felt like you were alone in the universe. You’re not. You never were. It’s just that the answer was never in the stars.”

After the sudden death of her father, Juno Price has to return to the one place she swore never to set foot in again, her old childhood home of Hobbs End, New Mexico. Here, Juno has to face the dark secret that tore her family apart when she was a child.

Rekindling old friendships, confronting old enemies and struggling with her relationship with her estranged stepmother, Juno comes to the realization that everyone was wrong about the truth behind the Roswell incident and the mysterious Black Knight satellite. And that her imaginary childhood friend wasn’t as imaginary as she thought.

Clever, fast-paced, gripping and chock-full of heart and humor, Black Knight puts a new spin on the Roswell conspiracy theories and coming-of-age stories about growing up feeling like an alien.