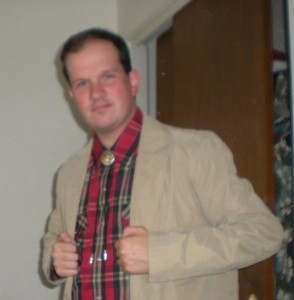 Max West was born and raised in New York City. He spent much of his youth making visits to his local library (starting a lifelong love of books) and watching much television – both cartoons of the 1980s on broadcast TV and a variety of movies and specials on cable TV. Earning a degree in creative writing from Baruch College in 2003 and taking night classes in art at the nearby School of Visual Arts, he created Sunnyville Stories in 2009 and completed his first adventure with Rusty Duncan and Samantha Macgregor in spring of 2010. He currently lives and works in Fargo, North Dakota. 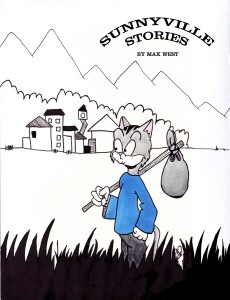 Sunnyville Stories is an independent comics series of the slice-of-life genre. Sunnyville is a small, remote village surrounded by vast wilderness. Inhabited by anthropomorphic animals, they go about their daily business dressed in traditional clothing; males wear suits and farm clothes while females wear skirts and dresses. In this inaugural volume, a wisecracking city boy moves to Sunnyville with his family. This young silver tabby cat, Robert “Rusty” Duncan, quickly meets a local country girl, a buttercream cat named Samantha “Sam” Macgregor. Together, they have all kinds of adventures in Sunnyville from meeting the other townspeople, playing in a private video arcade, and even facing local bandits. 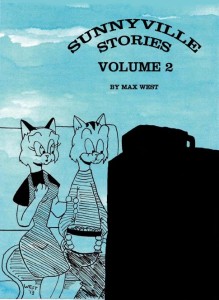 The universe of Sunnyville expands further as Rusty Duncan continues to settle into his new home and Samantha Macgregor helps him adjust. Rusty and Sam help patch up a family feud, get everyone’s appliances repaired, put on a stage play, attend a community dance, and even meet three identical brothers. Along with two short vignettes and a whole collection of development sketches, this enticing tome full of humor and daily life will keep readers amused. 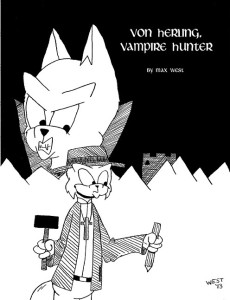 An original tale of the Gothic and supernatural, rendered in crisp pen & ink by renowned illustrator Max West, creator of Sunnyville Stories! When newcomer Vlad Magnus descends upon the remote Eastern Tennessee town of Richten, nobody suspects his true nature – as an unearthly creature of the night! The only one who dares to challenge this unholy menace is August Von Herling, a precocious youth newly arrived from Germany. Can Von Herling vanquish Vlad Magnus or will the townspeople fall prey to this vicious vampire?