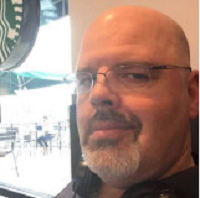 Robert became a fan of thrillers as a teenager when he discovered Clive Cussler’s Dirk Pitt series. These works, and others, inspired him to start writing his own books and a life-long dream was born. He first created his central characters Steve Bennett and Amanda Clark in college, though it would be many years before he hit on the right stories for them.

In his early forties he conceived the Port Mason series, stories set in and featuring a fictional city ‘somewhere in America’ that he describes as inspired by St. Louis and Portland (Oregon) with a strong dose of Chicago-style politics and corruption to keep things interesting.

His first Port Mason story, “The Inheritance”, was originally released in 2013. An updated and re-written edition was released later that year. Book two in the series, “The Servant”, was released in 2014 with book three, “In the Crosshairs” coming out in 2017. He has just released the fourth installment, “The Mayor”, and is getting started on book five.

Robert was born and raised in Illinois, where he lives with his wife, Angela, and their children, Josie and Jimmy. 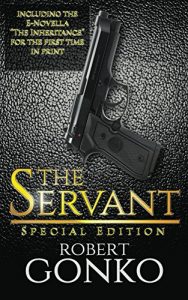 Private detective Steve Bennett has a world of trouble on his hands. A violent sex-trafficker wants him dead, a police captain is determined to send him to prison, his family thinks he’s gone off the deep end, and one of his closest friends has been murdered–all in one morning!

The murder of his friend trumps all other concerns and soon Steve is on the trail of a murderous psychopath who calls himself ‘The Servant of the Lord.’ His victims are the leaders of a movement to legalize same-sex marriage. The Servant strikes without warning, leaving bloody messages of biblical vengeance with each of his victims.

After murdering nine people in the space of a few hours, The Servant is just getting warmed up. What will he do next? How can Steve Bennett stop him? 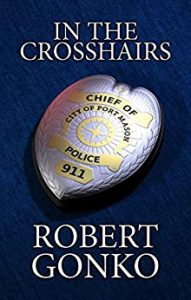 A cop charged with murder and sex trafficking is gunned down in broad daylight. It is the work of an individual known only as the Sniper; a killer who specializes in eliminating the most dangerous enemies of the Port Mason underworld—informers.

Private investigator Steve Bennett, fresh from his success in stopping the serial killer known as ‘The Servant’ is drawn into the hunt when it intersects with his most important case: the renewed search for his brother’s killer, a trail that is five years cold. The days ahead will test Steve as he has never been tested before, especially when the evidence points to the chief of police himself.

Steve and reporter Amanda Clark will face a gauntlet of intrigue, deception and betrayal beyond their wildest imagination as they find themselves “In The Crosshairs.” 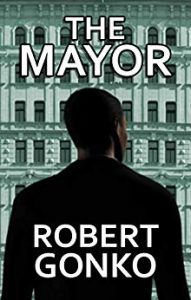 Moments before kicking off his campaign for governor, Port Mason Mayor Eric Hawkins and his wife are shot dead by hired assassins.

Who’s behind these crimes? The mob? Hawkins’ political enemies? And what do the murders have to do with an unresolved case from private investigator Steve Bennett’s police days?

With his own life in danger from the assassins, Steve must fight not only for himself but the lives of his family as he navigates the web of intrigue surrounding the murders. That web will lead him face to face with those behind the murder of The Mayor.