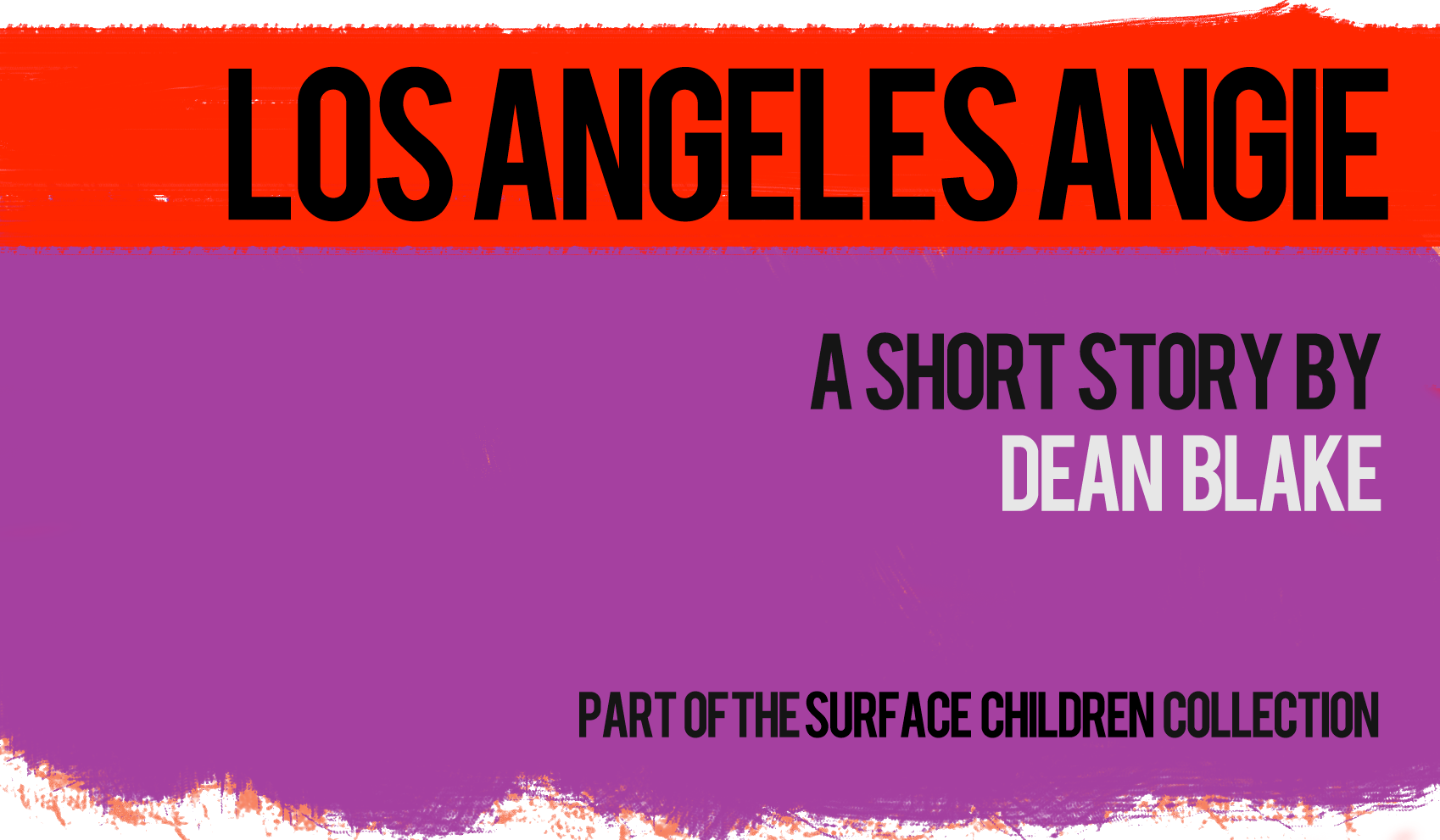 Anyway in the letter I tried my best not to write about Angie at all, but by the end of the letter, by the end of all my surface blabber, I couldn’t help but slip her name in there.

“So anyway, how’s Angie? Is she still a bitch?” I wrote before quickly writing about something else. I felt dirty.

When I first met Angie one of my sunglass lenses popped out. I walked up to her after class and started talking to her because she was pretty. As I spoke to her, one the lenses popped out and onto the ground, shattering everywhere. She laughed and told me that I was embarrassing.

Eventually, we left the campus and walked along the street and she asked me, “What are we doing?”

“We’re walking along the damn street. Now what’s your number?”

I told her that falling in love is interesting, I suppose, but there are other, far more interesting things out there.

“Like what? What’s far more interesting than falling in love?” She seemed genuinely curious.

“How the hell should I know?”

The next day she showed me her mobile phone with the photos of the guy she was in love with. He had stylish hair. She told me that he was Japanese but we both knew that he wasn’t Japanese. She told me that they were both planning to go to Japan to teach primary school children.

“I won’t be allowed into clubs there because you have to be twenty-one, and I’m only eighteen,” she said.

“If you’re eighteen and I’m twenty-two and we’re classmates, then that must mean I’m…”

And I said, “Yeah. It has happy hour going on.”

And we drank during this happy hour. We drank quite a lot, and for the first time in my life it actually was a happy hour. She pulled her legs up so she could sit cross-legged on the bar’s leather couch and pulled a cigarette out of her small, expensive-looking black purse and lit it and inhaled and exhaled and tapped. There was no ashtray because it’s illegal to smoke in bars now, and after realising this she killed the cigarette into her empty glass of ice cubes.

She was drunk – while I was in the toilet she stumbled over to a group of big guys who were confident at playing pool. I spotted her right after one of them leant over and kissed her; she kissed him back.

I pointed at her before dragging her out of there.

“You cheater! I can’t believe you just cheated.”

She just smiled. We walked to the car park. She was a rich kid so she had her own car park in the city. She pulled out her clinking bundle of keys and other things and pressed a button and her BMW beeped in response. We stepped inside: the car had leather seats and a big television screen. I couldn’t believe it. It was like I was with a celebrity.

“I’ll, I’ll drive you home,” she slurred. Her head was bobbing slightly.

On the drive home she asked me what would happen if there was a sudden crash, if because she was drunk she wanted to speed more, and she did speed more, and she kept speeding and speeding and eventually swerving and swerving and the glorious BMW became so wild and so liberated and so sure of itself that it wanted to crash into something as equally beautiful and as equally confident just to see what would happen, and so it did: it smashed against a giant statue of a horse and a soldier sitting gallantly on that horse; there was an earthquake of a noise, time lost its appeal, there was dinting and there was shuddering and there was screaming and anyone who would’ve seen the event would’ve been momentarily silent, pondering but not pondering at all: the catastrophe would’ve been immense, it would’ve been pretty interesting, it would’ve been one of those things you’ll use as a conversation starter in parties for years to come if you made it out of it alive.

But the accident never happened and she drove me home safely. I wanted to put my hand on her leg and feel her up and kiss her, but I did nothing. We barely said goodbye. After that, for twelve months, at least, she actually did remain in love with him; they never went to Japan but they did have sex a lot of times and she kept blogging about him and posting up photos of him and the two of them together. Los Angeles Angie and I drifted apart and instead, for a while, anyway, her love became my best friend and I became his. Eventually I stopped thinking about her or trying to text her; I learnt things about the world and I grew up and matured and de-matured and fell in love a couple of times and fell on my face a couple of times. I tried new things and stayed with some old things and sometimes I’d look at photos from the past, and when I would I’d get sentimental and write more letters such as the one I’d written just then.

Dean Blake is a writer from Brisbane, Australia. Los Angeles Angie is just one short story in his much-anticipated book of short stories called Surface Children.

For more about Dean (and for other short stories), you can read his blog, Generation End.