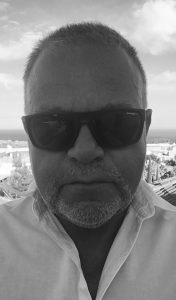 Born in the Blackpool of the South (Weymouth) in 1964, Steve Edwardes was almost immediately transplanted to, and educated in, Bournemouth, on Dorset’s sunny coast. After being sent to a small church Primary School, he narrowly missed out on Grammar School (i.e. he failed the 11+) and then attended a school so good, that its one-time claim to fame was that it had supplied more people to Dorset’s prisons than any other. It was later deemed by the Local Education Authority that the school would better serve the community as a car park, so it was razed to the ground. This didn’t put Steve off though and to this day, he has an abiding love of both prisons and car parks…

The RAF was the only employer worth considering after such an estimable education, so Steve joined up and set about enthusiastically drinking vast quantities of poor quality beer at many of the UK’s RAF bases and local pubs. Having exhausted the entertainment possibilities of this after nine years, he embarked upon a career in property sales, just before a major crash in the market. The need to replenish his shirt collection, along with a desire to establish a path in life, led him to a stint in Bristol at college and university, after which he travelled the world working within the medical industry. During this time, he qualified as a pilot and took up SCUBA diving, skiing and other ridiculously expensive pursuits. Not being able to afford most of these, he started writing.

Steve has always been interested in Crime Fiction, being inspired by such luminaries within the genre as Ian Rankin, Mark Billingham, Mark Dawson, Peter James, Angela Marsons, PD James et al. He has been fortunate enough to live in many countries, but has recently returned to SouthWest England, where he is writing, cooking, playing the guitar and occasionally indulging his passion for great red wine and unusual cocktails. 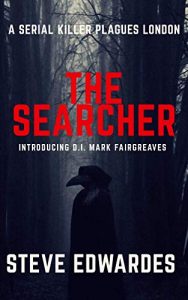 1665. Silas is killing Plague victims for fun; the ready supply of victims means that he can satiate his desires easily.

In 2015, at the Crossrail dig in London, two bodies are found, just as a spate of murders takes place. As the police rush to put together the links between the two, the modern-day serial-killer fights to stay ahead of them enough to kill again. DI Mark Fairgreaves and his team must work together to put together the pieces before they lose one of their own.