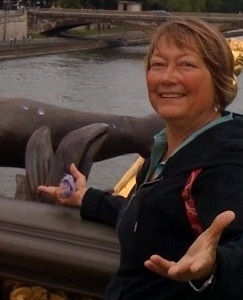 O’Neill has been nominated twice for the Pushcart prize, and has nominated many authors herself. Neither she nor they have won. Not yet.

She grew up in Indiana, has lived here and there in the US and beyond, and now lives in a part of Brooklyn that doesn’t look like Brooklyn. She has been married longer than you, and just might walk farther—though probably not faster. She is a diehard Red Sox fan.

She is fascinated by unscrupulous people, random acts of kindness, and the way rats always seem to avoid the third rail in subway stations. She believes in ghosts and socialized medicine, and plans to be reincarnated as somebody who is very tall. 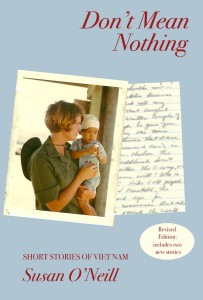 The Tortured History of Don’t Mean Nothing

Don’t Mean Nothing was first published as a hardcover in late October, 2001. Perhaps my excellent agent and my superb team at Ballantine/Random House dreamed I’d be lauded as a sort of female Tim O’Brien: Army nurse writes fiction collection based on her service in Viet Nam! They gave me a tidy advance, with which I bought a VW Bug and traveled across the US with my daughter. The book got fine reviews, except for one snarky bit by the anonymous Kirkus, whose cut-line proclaimed it: “M*A*S*H*, with lots more sex and cursing.”

It was, as I said, first published October of 2001. A month after the World Trade Center attacks. When patriotism ran high in the US, and the market for less-than-patriotic books set smack-dab in the middle of the quagmire that was the Viet Nam war—which most folks conceded that the US had lost—was not exactly robust.

I printed the snarky Kirkus cut-line on a T-shirt and chewed my fingernails as I obsessively checked my Amazon ratings, which spiraled quickly from Meh to Pathetic.

My agent sold the book to Black Swan in the UK. Who arranged a vigorous round of national and regional radio interviews. Unfortunately, when I took to the mikes, the Queen Mum had just died, and was being laid to rest with royal fanfare on the Telly.

I didn’t even bother to check my Amazon.UK ratings.

My editor emailed shortly thereafter with good news and bad news: The book had been sold to UMass Press for US paperback publication. And he had been “downsized.”

I thanked my editor—and grieved for him. The sale gave me an edition that could be used in schools and Pop Culture events after the hardcover was shredded. All profit went to UMass, and to Ballantine, to help make up for that tidy advance. Still, it beat oblivion.

In 2010, Ballantine and UMass gave me back my rights to Don’t Mean Nothing. A small New Jersey publisher, Serving House Books, put out a new edition; they added two stories not included in the original editions, which made it a kind of Author’s Cut, and put it out on Kindle as well. 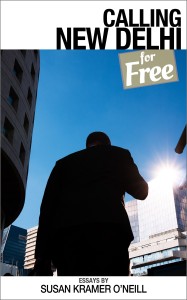 Technology first rocked our world when a lightning bolt zapped a bush at the entrance to a cave, and First Man crawled out and stuck his hand into the mystical blaze. Centuries later, we still find technology fascinating, mysterious, distracting, vital and Wow! Shiny!–and it still fries our grasping, hapless human hands, not to mention our grasping, hapless human brains.

And so, I give you Calling New Delhi for Free.

The short essays in this little book are all about that tender point where the finger meets the flame, where the ecstasy and the pain live–and where the sweet, dark humor so often lurks.

Most of them simply examine the craziness of everyday life. Some spring from weird travel experiences. Some pick at politics, niggle at religion, worry at war. They’re set in Starbucks, in my kitchen, in Viet Nam, in India, on a Russian train and a Greyhound bus; in Massachusetts, Indiana, Brooklyn and Times Square; in WalMart and Golden Corral, and at the second inauguration of Barack Obama. All have been published somewhere before. In all the pieces, there is a tie to technology, be it as strong as an anchor cable or as tenuous as a spiderweb. The theme gave me a lot of leeway—because what, in this modern world, isn’t tied to technology?

Why, I’ve been asked, did I title it Calling New Delhi for Free? Because, gentle reader, you’ve done it. We’ve all done it. We do it nearly every time our shiny, high-tech lightning zaps our fingers.

I’ve even texted New Delhi for free quite recently. This is a true story: I used the text support option when I ran into difficulty trying to sync this book to my Amazon Author Page. “Where are you typing from?” I asked the service person at the end of our session.

A disclaimer: you don’t have to be tech savvy to enjoy this book. Nor do you have to be a technophobe. You just have to be a human being with bandaids on your fingers.

Which pretty much describes us all.