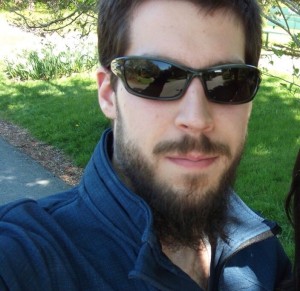 Thaddaeus Alexander is a sci-fi/fantasy novelist, and indie author. He grew up in Stephenville, Newfoundland where he learned to appreciate the art of story-telling and the fantastical adventures you could both create and experience. Although captivated at an early age by the written word, it wasn’t until much later that he began to write those adventures and not simply read them.
Involved in the Culinary Arts for a number of years, Thaddaeus traveled for some time, but it wasn’t long before he returned to his childhood, and the joys of a well-crafted world between the bound pages of a good book. He then spent the next year working on the first installment of his debut fantasy series, Fractal Saga: Timeless Fracture.
It all began with a run-away imagination and his desire to explore the unknown, the extraordinary and the ever-curious, ‘What if?’ He now lives in St. John’s with his fiancée, where he writes full time, bringing new and exciting characters to life and sharing them with world. 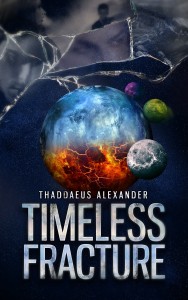 Lummel and Jyotan used to lead normal lives nestled away in the forest city of Wenzolaf. Brothers in every sense but blood they had everything they could want: a wonderful home, great friends, beautiful scenery and peaceful lives.
The untimely arrival of a stranger threatens to upset those lives and awakens in them latent abilities that are connected to the very essence of the world around them. Rhaegro, an Officer of a rival nation, sets into motion a series of events that will rock the very foundation of Elzdiroche.
Having been exiled for helping their village avoid disaster, they set out on a journey of discovery. Hounded and enslaved by agents of The Order, a mysterious organization that has persisted since before recorded history, Lummel and Jyotan are pushed to their breaking point. With war looming on the horizon, how far will they go in order to find the answers they seek?
Deception and conflict abound as they fight to uncover the truth, for their freedom and their very survival. What roles will the unsuspecting duo play in the coming storm, and why? One thing is certain: they will need to find out before it’s too late, not just for them, but for all of Elzdiroche.