William Joseph was born in Lakewood, New Jersey. He grew up in nearby Pine Beach New Jersey and has lived there his entire life. An only child and highly imaginative, William Joseph spent a lot of time writing growing up, but it wasn’t until he finally felt that he had a story to tell with THIS IS WAR that he stuck with it from beginning to end. During this time, William Joseph attended Ocean County College and graduated with honors and two degrees. While in college, he also attended a creative writing class, where, for the first time he shared his work with other people. Sharing a short story with them and seeing how he could emotionally connect with his readers got him hooked. His short story was published in his college’s annual literary magazine, and since then, the pursuit for publishing his work began, as well as the dedication and dream of writing more books and stories. William Joseph is a Multi-Genre Author. He likes to focus on believable characters that have flaws and he likes to throw them into chaotic or unimaginable events. He likes to challenge his readers, and create hidden undertones or messages that challenge both the readers and characters and push the boundaries of what’s right or wrong, good and bad. 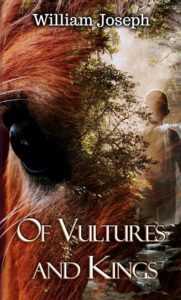 An incredible adventure awaits all who take that first step into the unknown.

That’s what happens to Billy, a young and precocious boy. Nothing could have prepared him for the journey that he would soon find himself on. Lost in the wild, he befriends several animals, but he soon finds himself being pursued by ferocious beasts. Will Billy and his new friends be able to escape? Will Billy be able to make it back home to safety?

Of Vultures and Kings is a tale full of colorful characters and beautiful scenery that puts both courage and friendship to the ultimate test.