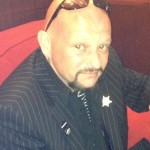 FILLTheVOID – The Wolf needs a voice… The JackPort Killer Audiobook

A damaged serial killer is stalking the city streets.

Ritualistic in their method.

Can Detective Lobo find the JackPort Killer before events get too close?

Welcome to The Endless, Sprawling, Neon City beneath the broken EverNight.

Welcome to the world of The Wolf.

Acclaimed author Kneel Downe released the first of his Detective Kurt Lobo case files, The JackPort Killer, in May this year to great critical reception and his VirulentBlurb universe grew bigger. Starburst Magazine picked up on the teaser trailer for it and reviewed the book, saying “you will soon find yourself completely immersed into the bizarre, cyberpunk, dystopian world Downe has created, and find yourself wanting more” and TheCultDen gave it 10/10.  Now the universe is set to expand again as, for the first time, the Wolf gets a voice when The JackPort Killer comes to audiobook!

Kneel was born in 1967 and raised in the middle of countryside and silence where he immersed himself in books and fantasy.  After trying several writing styles, Kneel began tweeting short fragments of fiction. A meeting with his idol, Jeff Noon, made Kneel realise that these short bursts could make up a whole universe of fiction and so the VirulentBlurb projects began.

The world-weary wolf-spliced Detective Kurt Lobo first appeared in Kneel’s debut book, VirulentBlurb:Fractures, along with the other characters from the ever-evolving VirulentBlurb.  Amelia received the first solo character outing last year in the next book Amelia’s Song but, whilst Amelia’s journey was a beautiful change of pace and very well received by fans and critics alike, it was the wolf-spliced detective that readers of Kneel’s books were clamouring to hear more from and the first casefile was released.

We have struck a deal with London-based award winning studio Spokenworld Audio, winners this year of both an Audie (the Oscars of the audio world) and a New York Award for their work, and the production and distribution costs are sorted. All that is left now is to find the funding required to finish the project off and get all the parties in to the studio. This requires £2500. So we have loaded up the perks and crossed our fingers…

The search then began across the globe for a voice actor to bring Lobo to life in a way that excited both Kneel and the fans. After an extensive hunt, actor Greg Patmore of Big Finish fame was approached.

Greg is from the industrial heart of England, son of a soldier and a nurse, with a childhood background in brass bands and community theatre. A working class boy, his expectations were set pretty low until he discovered music and theatre almost simultaneously in his mid teens.  He recently appeared with Kevin Costner and Bill Paxton as Good ‘Lias Hatfield in the hit US series “Hatfields & McCoys’ which won 5 Emmys, and this year appeared with Bradley Walsh in the current series of ‘Law & Order UK’. Subsequent appearances include ‘Vera -The Deer Hunters’ alongside Brenda Blethyn, and a role in new US TV series The Assets. He has appeared in several episodes of Coronation Street as thug Jonny Smith and has featured in David Morrissey’s directorial debut film Don’t Worry About Me and alongside John Henson and Neil Fitzmaurice in the British comedy feature Charlie Noades RIP.  He will next be seen on stage at the Edinburgh Festival with Anne Archer in Terry Jastrow’s hard-hitting play ‘The Trial of Jane Fonda’.  Watch his showreel  and see why we want him as our wolf.

We were all delighted when Greg read The JackPort Killer and loved it. He has excitedly agreed to the role and plans have been started to go into production of a full audio book.

This is where you come in! Between the fractured glass and the white noise is a void that needs filling. The silence is unbearable.  The wolf must tell his tale…  Help us to give a voice to Detective Kurt Lobo.