Review – Attrition: The First Act of Penance by S.G. Night 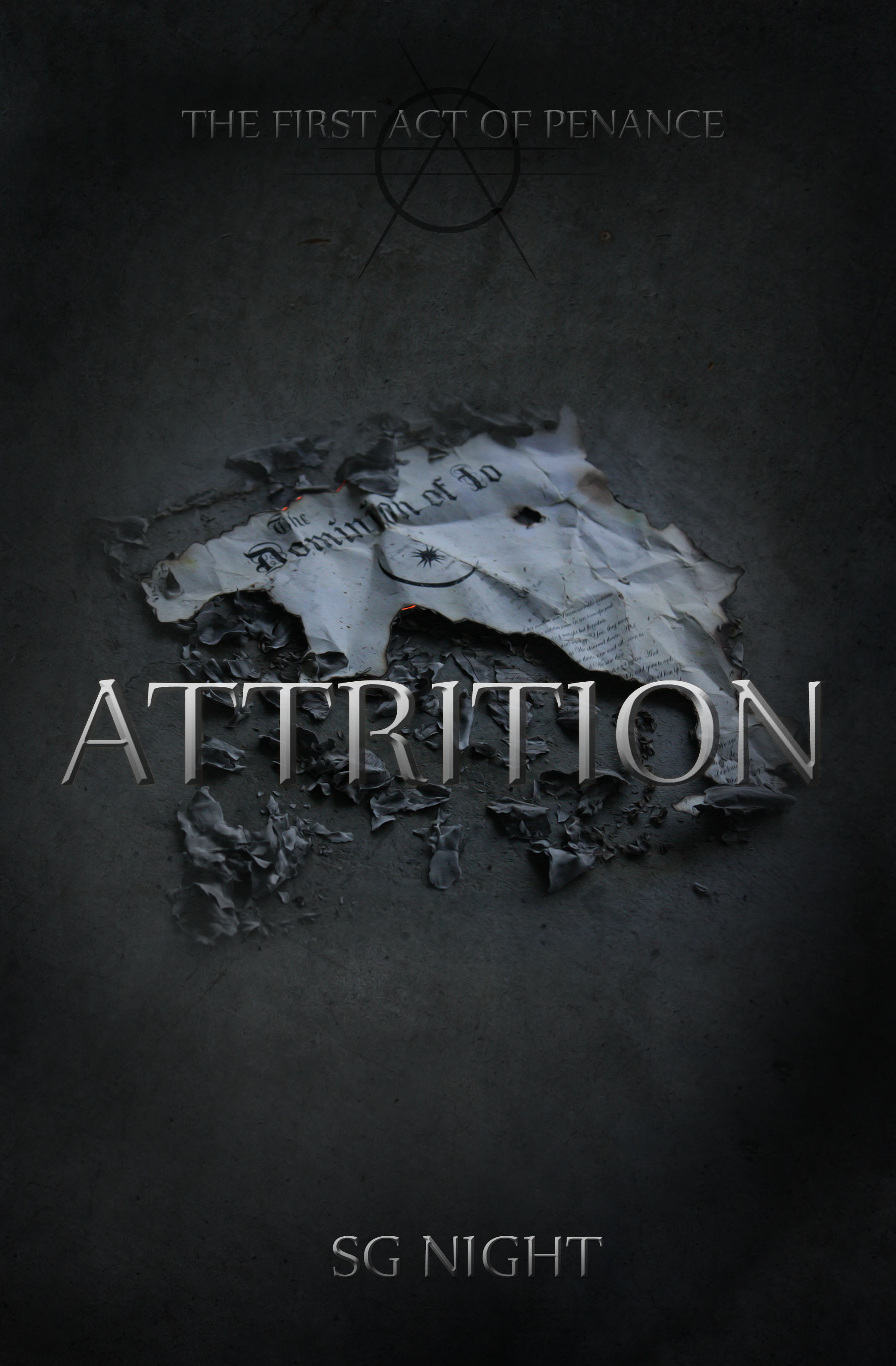 I have to admit that I have been a fan of the fantasy genre ever since I picked up Pawn of Prophecy by David Eddings and Magician by Raymond E Feist many moons ago. The difficulty is that I have found that many fantasy books don’t live up to similar expectations and often tread the same path as countless novels before. Perhaps this can be laid partly at the foot of the Forgotten Realms series and those of a similar ilk which came straight out of the Dungeons and Dragons game.

Attrition: The First Act of Penance thankfully does not tread those same streets. The prologue had me both intrigued and worried to start, as the storyteller sits across from the chief protagonist of the rest of the book, cajoling him to tell his story. It was an intriguing premise that immediately pushed you to find out the history behind this mysterious character from which the Cold exuded. And yet the Cold was exactly what concerned me: there were too many Portents and Capital Letters which so easily could have drowned the story in pretension and laborious delivery.

Thankfully, this is restricted to the Prologue and Epilogue, and is quite obviously intentional, as the rest of the book is written in a wonderfully descriptive and evocative style. From the descriptions of the rooftops of Litoras to the tall tower called Velik Tor in Oblakgrad, home of this superhuman race named the Majiski, the world in which the main character, Racath, inhabits is mapped out in glorious detail. So too are the races that inhabit this world: Humans, Majiski, Elves, Arkûl and Goblins, each with their own specific traits and abilities. The languages of the Dominion of Io are also effortlessly intertwined into dialogue, adding a richness and strangeness to the world, without alienating us as we delve into the world that Night has created.

Admittedly, there were one or two instances where language did intrude: the invention of faul as a swearword grated for a while, but was elegantly explained later in the book, and “gonna” instead of “going to” seemed at odds with the rest of the language used by some of the characters.

Nevertheless, if you thought that Night had exhausted himself describing the world, its races and the languages they spoke, you’d be wrong. Each character within Attrition is afforded attention, their personalities consistently developed as the plot progresses. Racath begins as an accomplished, if naïve and overconfident assassin for the Majiski, before discovering his true abilities as a magician of the highest order, able to command fire without limit through his corobna dosdom. His compatriots, Notak, Rachel, Toron, Alexis and Nelle have their own issues and traits which are deftly woven into the plot, addressed and acknowledged in their interactions. Yet even the simplest character, killed off within the first few pages, is given a full personality.

Towards the end of the book, I decided to find out more about the author, and I’m glad I waited. It’s hard to believe that S.G. Night is just 18, and this book has taken him four years to develop. This review may well have had a very different outlook if I had known that from the outset. For a writer who had ten years of storytelling under their belt, I would have said that that Attrition was a brilliantly imaginative novel, with the odd aspect that detracted (such as the aforementioned Prologue, and the occasional lapse into archetypal film-style action sequences), but nevertheless a book that serves as a good introduction to the author’s later books.

That this is Night’s first book has taken me aback. Whilst I was reading it, I was unable to put it down, making for several tired days at work the morning after, and it was with immense sadness that I reached the end. It is a novel with astonishing maturity and a well-developed writing style that delivers in almost every aspect. It has left me in a state of limbo, hoping that it won’t take Night another four years to deliver the second Act to this epic.

So why am I giving him only four and a half stars? Am I being mean? Certainly, if I hadn’t known Night’s background and age, I may have given him five stars (or then again, possibly fewer, since I might have expected a more seasoned writer to have ironed out the wrinkles). As it is, I know and expect that Night can deliver even better than this, and believe me, this is a superb, sumptuous, redolent book. I want the second Act to get the five stars, and then Self Publisher’s Showcase is going to have to come up with more stars for the third. I want Night to do well, because I have not found a Fantasy author who has excited me like this in years.