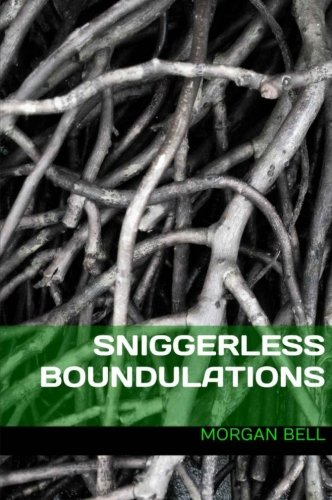 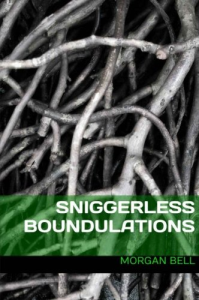 Sniggerless Boundulations is the debut short story collection by Morgan Bell. With titles like The Tunnel, It Had to Be Done and The Package, very little was given away and I had no idea what to expect. What I got was a collection that instantly hooked me. From the point that the first story, The Tunnel, started playing in my head like a clip from a film, I knew this was something special and it went on from there, as I read the whole book in one sitting.

This was a fascinating collection. It is a short book of very short stories with the majority of them being a single scene featuring relatively few characters. Each story played out more like a vignette, captured moments in time. Like I said at the start, the writing was almost film-like and you could nearly see the camera fade between the stories, which is a triumph because the characters and scene in each tale were barely described and yet it was brought to life so vividly through the dialogue and the portrayal of the character’s emotional states that physical description was unnecessary. There was no single thread connecting each of the stories, other than an underlying feeling of slight discomfort and disconnection, in a very good way, as they dealt with themes of fear, betrayal and anxiety amongst others. The author has crafted each story so that your own imagination fills in the back stories of how the characters got to the place they are at and what happened after the scene fades to black to counteract the need for more. That said, I would not want more from each story, I loved the way they are written and to get gratification or resolution would take the edge off the book. By the end of the book I was wrung out, having felt every emotion and lived every experience.

If you are looking for action and adventure or a progressing, conclusive plot in this book, or even within each short story, then you may be disappointed. It is not a light read. But if you are looking for emotive, almost psychological studies of the human character, a visceral perception of interaction, a written photograph of the psyche then you will like this collection as much as I did and go back to it time and again.