The Inspiration for Eli’s Heart by Susan Moore Jordan 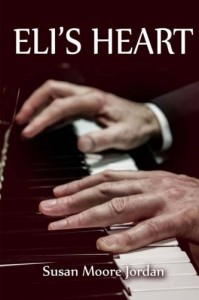 Eli’s Heart was inspired by a friendship I had decades ago with a brilliant teenage pianist born with a defective heart. Samuel Sanders was fifteen when I first met him and heard him play. He was visiting a sister who lived in my hometown and he came to my house several times, and we listened to recordings of orchestral music, played piano duets (which was definitely daunting for me!), talked about books and baseball. His activities were restricted because of his congenital heart defect.

Tetralogy of Fallot, the heart condition my character Eli Levin lives with, is a complicated and frightening disease which is present at birth. Physicians have been aware of it for centuries. According to Wikipedia, “Itwas described in 1672 by Niels Stensen, in 1773 by Edward Sandifort, and in 1888 by the French physician Étienne-Louis Arthur Fallot, after whom it is named.”

With a lot of help from Dr. Aarti Asnani, a cardiologist with Massachusetts General Hospital in Boston, I finally developed a grasp of the condition. There are four separate defects of the heart: a hole between the lower chambers (ventricles) of the heart, which means unoxygenated blood is mixing with oxygenated blood; a narrowing of the valve between the right ventricle and the lungs, which means not enough blood is getting to the lungs to be replenished with oxygen; a thickening of the wall of the right ventricle; and an aorta which is misplaced and is drawing blood from both ventricles. The result is a considerable reduction in the amount of oxygenated blood distributed to the body. The average person receives between 90 and 95% oxygenated blood. TOF patients receive sometimes less than 50%. Breathing is a struggle. Any physical activity, even walking, becomes difficult and can be life-threatening. Many children died in infancy, or did not survive puberty. Cyanosis (blue coloring of the skin, especially fingers, toes and lips) is a primary symptom.

In 1944, Drs. Alfred Blalock and Helen Taussig, with considerable help from Blalock’s assistant Vivien Thomas, developed a procedure to alleviate these children’s suffering. A shunt was created by attaching a branch of the aorta to the pulmonary artery which increased the flow of oxygenated blood. Sometimes this increase was dramatic; sometimes enough to at least ease their symptoms. From my understanding, patients who survived the procedure lived more normal and longer lives. However, the heart was not repaired. The Blalock-Taussig procedure was considered “palliative”—it eased the worst of the symptoms, but all four defects of the heart were still there.

About ten years later an open-heart surgery (called the “total correction” or “total repair”) was performed which patched the hole between the ventricles and widened the opening to the lungs, giving the patients a chance at a better quality – and quantity – of life. Over the past decades, as TOF patients have lived longer (some into their seventies and even eighties) other surgical procedures have been developed and refined, and a range of medications also exists to help treat the condition. It was at first considered a congenital heart defect. It is presently considered a congenital heart disease, a life-long struggle with a heart which can never be made “normal.” From my understanding, there is no one “standard” procedure for these patients. One comment from Dr. Asnani in our extensive correspondence stands out in my mind:

“With regard to treatment options for (adult) TOF patients, it’s definitely not a straightforward decision to pursue surgery, so we will often try to manage with medications for as long as possible.  Newer technologies like cardiac MRI are helping us figure out when the heart dysfunction is progressing to the point where heart surgery is absolutely necessary to prevent a further decline, though we’re still wrestling with defining the exact timeline.”

One of the first things Samuel Sanders told me was that he didn’t expect to live past the age of thirty. Other than that, and telling me about the cyanosis and that he’d had surgery, he didn’t discuss his condition and I didn’t ask questions. We concentrated on enjoying the time we had together.

After hearing him play – brilliantly –  the Rachmaninoff Second Piano Concerto a few months later, I lost touch with him. Some thirty years later I met a young man who was studying accompanying with Sam at Juilliard, so he’d have been in his early forties at that time. His student also told me Sanders had opted to work professionally as an accompanist rather than pursuing a career as a virtuoso pianist. I was very glad to hear he had survived past the age of thirty and was still sharing his extraordinary gift.

I thought of him again when I watched the HBO film “Something the Lord Made” (highly recommended) and wondered how he was. Internet searches revealed that he had died at the age of sixty-two. He’d had the B-T procedure when he was nine and two additional surgeries (the total correction and a heart valve replacement), and eventually not one but two heart transplants. The second one failed, sadly. While not a household name, he had a long and illustrious career as a collaborative pianist and performed with some great musicians who definitely ARE household names. I list a few of his many recordings in the discography at the end of the book.

As a teacher at both Juilliard and Peabody, and playing with many artists, Sanders had a grueling schedule for most of his adult life. I read somewhere that he played as many as 100 concerts a year. My thought is that schedule may have been what kept him going for so long. He refused to give in to his heart condition. His dedication to music made a huge difference in his case. From some of the blogs I’ve read by contemporary adult TOF patients, it seems the determination to live to the fullest despite their condition is what helps them not only survive, but thrive. I’ve also read indications of the difficulties of living with the disease: fear and anger, depression and despair, yet a great feeling of joy with every accomplishment. The human spirit is absolutely amazing. These are courageous people.

My book is fiction, and my character Eli Levin is the product of my imagination. I did not know Sam Sanders beyond that brief friendship when we were both little more than children. However, his passion for music certainly had a lasting impact on me; he was indeed an extraordinarily gifted pianist and musician. We don’t meet many musical prodigies in our lifetime, and if and when we do, we never forget them. The fact that this one also had a damaged heart made him even more unforgettable.