Books of the Month 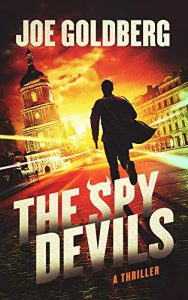 A deadly case. An international operative. When a mission turns personal, who will make it out alive?

Trowbridge ‘Bridger’ Hall was raised to be a spy. Leading a highly trained team of covert agents, he’s loyal to his squad and his country. But when his infamous CIA controller and mother assigns his crew an unusual off-books operation, his finely tuned senses scream danger.

Hunting a stolen briefcase across the world, his instincts proven lethally correct when one of his men ends up dead. And with potentially ruthless maternal betrayal and treacherous enemies closing in, it’s play or be played in a vicious game of death…

Can he crack the conspiracy before it costs his life?

The Spy Devils is the high-octane first tale in The Spy Devils thriller series. If you like pulse-pounding espionage, explosive action, and insidious double-crosses, then you’ll love Joe Goldberg’s page-turning story.

Back Where I Come From (Five Points Stories Book 4) (LGBTQ, Romance) 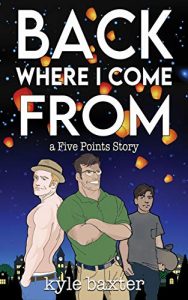 Sometimes You Have to Move Back to Move Forward

Two years ago Zach Torosyan lost his partner, leaving him with a young son to raise alone. After his restaurant fails Zach goes home to Edgedale for one last summer.

However, things back home are not as bucolic as he hoped. His folks are knee-deep in a zoning fight that threatens not only the family business but life in the Old Quarter.

Grant Strong is only going to be in town for a few weeks—a month, maybe. More than enough time to visit family and get a pesky zoning ordinance repealed for his law firm.

In and out. No problem. No mess. No fuss.

But it’s never that easy. In short order, Grant finds himself at odds not only with the town, but also his sister, and a certain handsome visiting father.

Can Zach and Grant meet in the middle, save the town, and maybe each other?

The Nightmare Schematic: Book One of The Age of Entropy (Modern science fiction, with fantasy and horror elements) 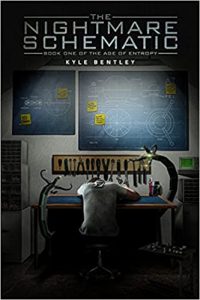 Since he was a child, Connor has dreamt of horrible machines. Years of nightmares have left the young inventor clinging desperately to his unravelling sanity, but that isn’t the worst part; that would be the gnawing certainty he could build those mechanical terrors, no matter how impossible they might seem. Everything changes when his dreams reveal a new machine, a miraculous device that brings hope instead of terror, and could save humanity from the many threats facing our modern world. Connor sets to work immediately, desperate to know once and for all if the visions haunting him are merely bad dreams or something far more sinister. As the machine takes shape and forces Connor to question everything he thought he knew, unseen forces begin circling. Even with the help of his closest friends, can Connor escape the burgeoning threat? What’s more, will he ever unravel the mystery of the nightmare schematic? The Nightmare Schematic is the debut novel of Canadian author Kyle Bentley, and the first book in The Age of Entropy series.