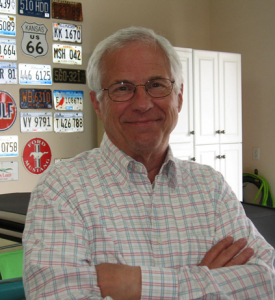 Kenneth’s novels focus on the inner strength of driven human beings to succeed against all odds and challenges. He is a former advertising writer who has his finger on the pulse of America…its opportunities, obstacles and hard-won rewards. Getting knocked down and getting back up, following the crowd or following one’s heart and having the courage of one’s convictions are all part of the great American storybook. Kenneth’s episodes focus on the personal beliefs and cultural convictions that are often at odds in today’s changing America…from immigration and ethnic injustice to climate change and egregious politics. He roots for the underdog and encourages dialogue across all borders, both real and imagined. The typical American family lives here, in a world of trials, tribulations…and triumphs of the American spirit. 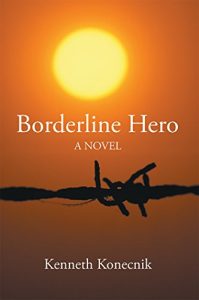 “Son, don’t forget your roots while you’re busy branching out.”

In Borderline Hero, 17-year old Curtis Moultrie of Sugarfield, Texas never felt totally comfortable with the cultural traditions and values he grew up with. He was the independent thinker in his family of five and liked to hear both sides of all stories. These feelings intensify when he enrolls in the journalism department of a university in the north, where he meets some other idealistic, like-minded students, including a young woman who begins to take the place of the girl he left behind. Hostilities break out back home after Texas enacts new harsher immigration and abortion laws, and the repercussions are felt nation-wide. Curtis finds himself conflicted as he returns home and tries to support his family while attempting to de-fuse the confrontations in his community and at the southern border with the help of his college friends. They are not welcomed with open arms, and war with Mexico is imminent as Curtis and his group of investigative minds uncover a nefarious plot surrounding the chain of events that led to this critical showdown.

Inhabit the Night: A Novel of Human Resiliency (Fiction) 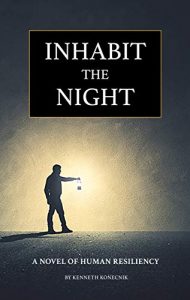 “Don’t be judged by who you appear to be; be judged for who you are.”

The circumstances of one’s birth have a lot to do with what a person is able to accomplish in life, as Jeremy Lincoln discovered in Inhabit the Night. The young, musically inclined ad man was well on his way to living the American Dream when he was eerily confronted by another incarnation of himself on the streets of New York. Even though the downtrodden person in his face had the very same conscious mind and talents as Jeremy, the circumstances of his birth were more daunting, and the negative perceptions of his persona had become reality. After experiencing a feeling of shock and transformation, Jeremy’s character walks away in the guise of this new identity, Carlos…who is looked down upon with disdain. Harboring much more difficult obstacles to overcome, Carlos does what he can to survive, until he comes across an empathetic young woman who recognizes the talents and essence of his character, falls in love with the person himself, and helps put him on a path to greater success. As Carlos begins to gain a stronger foothold in life, a more challenging incarnation of his being suddenly confronts him – and the external and internal struggles begin once again.

Democracy Reborn: Overcoming the Politics of Fear and Divisiveness in America (Politics) 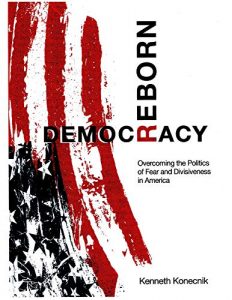 Our democracy is under attack. Its reason for being, the electoral process, has been manipulated, violated and humiliated beyond recognition by forces both external and internal. The culprits are identified in Democracy Reborn: Overcoming the Politics of Fear and Divisiveness in America. They include advertising; the Internet; the media; the two-party system; the Electoral College; and most recently, foreign influence. As deep-rooted and profound as these culprits are, there are steps we can take to forestall the intrusions and restore the democratic process our forefathers envisioned. The specific remedies are outlined in this book. Here and now. Today. 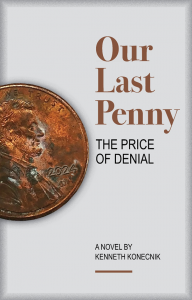 “Third-grader, Penny Christopher, put on her allergen-filtering mask and stepped out into a hostile new world.”

In Our Last Penny, a Midwestern family with an asthmatic daughter struggles to survive the skyrocketing temperatures, raging floods and foul air caused by global warming in the near future. Penny’s mother, Cheyenne, a native American whose upbringing taught her that we are all one with the earth, is a climatologist whose nightly weather warnings on TV are avidly watched and prepared for by everyone in the community. Her husband, Mason, regularly rescues trapped citizens from rampaging storms as Captain of the city’s Flood Department. And their disillusioned teenage son, Miles, gets into fights in school – and with the world – before teaming up with a questionable friend as a means of surviving the elements…while the Christopher family begins their search for the last unpolluted place on earth.