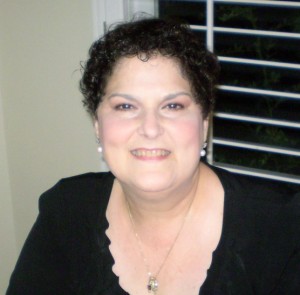 Maria Elena Alonso-Sierra is a romantic suspense author with a unique point of view. Her adventure novels take place in locales across Europe and the United States, reflecting her international upbringing and extensive time as a global traveler. Her career began circa age thirteen when she penned a very juvenile science fiction short story, but the writing bug hit, and she has been writing, in one capacity or another, ever since.

Ms. Alonso-Sierra has also worked as a professional dancer, singer, journalist, literature teacher, and novelist (and not necessarily in that order. She likes variety). She has a Masters in English literature, specializing in medieval romances. A lover of all things medieval, she became a speaker of many tongues—literally. Her fluency expands from English to Spanish, French, and Italian; she has a smattering of German now, since she hasn’t practiced it in years (and she won’t say how many), can read Latin, middle English and old French. The latter helped her trudge through the manuscripts she read for her Masters. Cuban by birth, and American by choice, she has lived in many countries as well, including France, where she set her first novel, The Coin. Her second novel, The Book of Hours, is set in California and England, and she is working on her third novel where she will introduce her new character, New York City Detective Nick Larson. She is currently an active member of the Romance Writers Association, Carolina Romance Writers, and the Kiss of Death Chapter of the RWA.

She loves to hear from her readers, to read their comments and questions, and loves to read, period.

Ms. Alonso-Sierra now resides in North Carolina with her husband and dog, Amber. 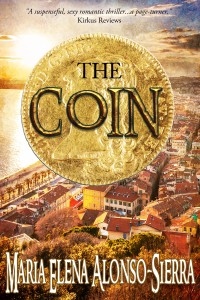 Who ever thought a coin could get you killed?

For artist Gabriela Martinez, life has become complicated: she suspects her mentor and friend wants her as his mistress, her husband is neglecting her, and her latest illustration is ruined. Seeking peace, she visits her favorite thinking spot in La Marbriére, the mountain overlooking her home in the Côte d’Azur. Distracted, she winds up in an unfamiliar clearing, where she discovers a 1945 French coin half-buried in the ground. Delighted with its beauty, she has it set on her favorite bracelet.

Richard Harrison, an American intelligence officer, is livid. A simple favor for his boss has turned his vacation in the French Riviera into a hellish assignment. Now, not only does he learn the truth about the coin, but he must also protect Gabriela from a cunning killer who will stop at nothing.

TIME IS RUNNING OUT

Together with Maurice Nôret, from French intelligence, Richard attempts to discover the madman’s identity, except his budding love for the beautiful artist is turning into a dangerous handicap. Every one of his moves is thwarted with brutal countermoves. Soon, the psychological games to terrorize Gabriela escalate beyond his control. If Richard doesn’t find a solution, it may be too late for them both.

Set in the exotic French Riviera, The Coin is a story of hatred, betrayal, love and duty—of terrible and painful choices that, nonetheless, bring about personal triumph. 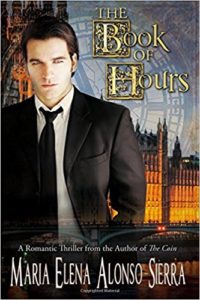 A LOVE IN JEOPARDY
In 1993, artist Gabriela Martinez almost lost her life to a sociopath’s twisted vision. If not for Richard Harrison, the operative sent to protect her, she would have ended up dead. The dramatic showdown pushed them together, but there were too many obstacles temporarily pulling them apart.

A NEW THREAT
After catching a glimpse of Gabriela’s new work, The Book of Hours, Arnold Wickeham has been like a man possessed. Now, he will do anything—anything—in order to claim it, and nothing, especially not Gabriela, will stand in his way.

THE PAST IS CATCHING UP
Richard Harrison has never given up his true love, Gabriela. Now someone new is threatening her life, and he will risk everything to protect her. But the stakes are now higher, and there is much more to lose. And, if he doesn’t stay one step ahead of the danger, her life, but especially, their future, may very well go up in flames.

A LOVE TESTED
In The Coin, Gabriela and Richard were cruelly used by fate—and destiny isn’t done. In the shadow of this new threat, their choices may not just save their lives, but also their love. 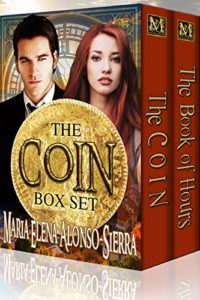 The thrilling, complete story of Gabriela Martinez and Richard Harrison, as they try to keep one step ahead from madmen who are trying to kill them.

THE COIN (Book One) – A coin found, a terrible secret, and a psychopath who will stop at nothing to keep that secret safe.
When Gabriela Martinez finds a French coin on one of her outings, she never thought the possession of it could get her killed. Only Richard Harrison, the intelligence operative sent to protect her, can save her from this madman, who will do everything to silence Gabriela. And when the psychological games to terrorize Gabriela escalate, Richard must find a solution, or it may be too late for both their lives and their love.
Set in the exotic French Riviera, The Coin is a story of hatred, betrayal, love and duty–terrible and painful choices that, nonetheless, bring about personal triumph.

THE BOOK OF HOURS (Book 2) – For Gabriela Martinez, psychopaths do hit twice.
Four years ago, when Gabriela Martinez almost lost her life to a sociopath’s twisted vision, she never thought she’d be hunted again.
After catching a glimpse of Gabriela’s new work, The Book of Hours, Arnold Wickeham has been like a man possessed. Now, he will do anything to claim it, and no one, especially not Gabriela, will stand in his way.
Now that her life is being threatened once more, Richard Harrison will risk everything, not only to protect her, but especially to get her back in his life. However, the stakes are higher this time around and there is much more to lose. Together, Gabriela and Richard must find a way to stay one step ahead of the danger, if not, Gabriela’s life, but especially their future together, may very well go up in flames.

Set in California and in London, The Book of Hours is a story about greed, dangerous obsession, family duty, and, especially deserved second chances.

“Dare I say that The Book of Hours may have been better than The Coin? Along with the action, suspense, romance, and murder attempts, who wouldn’t enjoy this book? – Books, Reviews, Links, and a Little Extra” 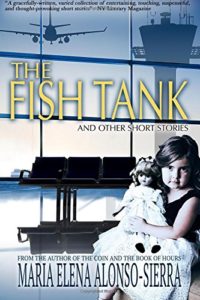 A collection of short stories from the mind of romantic suspense author Maria Elena Alonso-Sierra that will take your imagination on a ride across all genres. Delve into For the Fun of Writing, where flights of fancy are given voice in “Jerry’s Gift” and “Rites of Passage.” Glide into Soul Songs, stories from the Cuban Diaspora, where the author weaves many of her own exile experiences in “The Fish Tank” (award winner), “Bubbles Don’t Bring Smiles,” “Lullaby,” and “A Day in the Life of Benito José Fuentes.” Take a peek at Prologues, two prequel short stories that introduce characters in upcoming novels. Twists and turns run rampant in “Into the Light,” and “Mirror, Mirror: A Detective Nick Larson Story.” Finally, enjoy The End, a short-short of whimsy in “Everyone’s a Critic.”