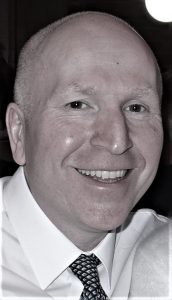 Anthony’s first book, Catechism, is now available on Amazon. It is a paranormal thriller, set in the UK and the first book in a series about Nick Ballard, a psychic who teams up with Detective Chief Inspector Kate Garvey to hunt serial killers.
Inside Catechism, he has attached a link to his website and a free e-book in the form of a novella. The novella links to a story about a character that features heavily in Catechism.
Anthony lives in Cheshire, England, with his wife, Mary. He works for a charity and is also a psychotherapist. He mainly writes in the horror/thriller genre, and apart from the Nick Ballard series, plans to release a horror novel in the near future and possibly an anthology of short-stories that will also be either supernatural or dark in content.
He admits that it’s pretty ironic that he writes this kind of fiction, as he’s the first person to look away during a horror movie when the scary parts come on. This dates back to childhood, when he hid behind the sofa from the Daleks and Cybermen in Doctor Who. There was also Hammer House of Horror movies to contend with and he found the Dracula series and The Masque of the Red Death particularly chilling.
He sincerely hopes to generate the same kind of reaction in other people with his books.

How many times can someone die?

Malfunctioning psychic, Nick Ballard, must answer this question if he hopes to halt a string of seemingly unrelated murders in which he shares the horrific fates of the victims. An unstoppable killer is targeting him for reasons he doesn’t comprehend, and Nick is powerless as he is tortured over and over again.
He must solve the riddle of his own past and discover why the ability that made him into a tv star is now a curse.
Nick enlists the help of sceptical DCI, Kate Garvey, to help him hunt down a remorseless, implacable killer, as the body count rises and the final death comes ever closer.