Anton D. Morris is a paranormal fiction writer who brings depth and intrigue to the genre with undertones of fantasy and adventure. Born on a Navy base in Illinois, he lived a diverse life that included volatile rises and falls in social status affording him an objectivity that is rare and unique. He is an adamant reader and patron of history and theology. He spends his working hours managing his family’s tax business and investments. He enjoys coaching baseball and motivating youth. As the parent of four, he originally wrote stories strictly for his children’s entertainment, focusing on genres that appealed to them. It was not until he was challenged by his daughter to write a novel that he became inspired to share his work with a global audience. In response to his daughter’s challenge, he wrote Awakening, the first of the Men Djinn and Angels series. With further encouragement from his wife and family members, Morris threw his hat into the self-publishing ring and found moderate success. He hopes that his writing adds substance to the paranormal genre and intrigue his readers with his vast knowledge of history and theological incites. 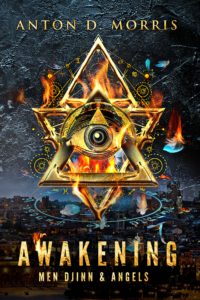 Talib, a sixteen-year-old Palestinian, miraculously survives the Cave of the Patriarchs Massacre, a travesty that kills his father. Escaping the conflict in the Middle East, Talib is offered solace in the luxury of a wealthy family’s mansion home where he meets two enigmatic sisters, Kate and Fiona. Despite their beauty, innocence and sophistication, these sisters are not at all what Talib imagined. Their occult practices and devotion to a mission handed down to them by The Enlightened Titans, a fraternal secret society, throws Talib into a conflict between his Islamic upbringing and the cosmological possibility that there is more to the universe than what a religious text offers.

If this is not enough, Talib learns that there is more of himself to offer, and the two sisters may take it unless he volunteers it.