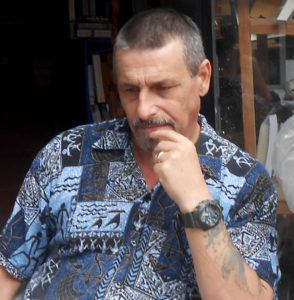 Born in Folkstone, England in 1961, Carl grew up in many different locations, including Zambia, Africa. He spent most of his school years in Leeds, West Yorkshire, where his extended family lived. He will be the first to admit that he was never a great student, but he did love reading. The last thing he would ever have imagined during his time at school was that he would achieve his dream of seeing his name on the cover of a published novel.

After serving eighteen years in the British Royal Navy, Carl was medically discharged with a broken back and started his first novel. He had almost completed it when he had to put it aside to earn a living wage. He taught himself Visual Basic and became a computer programmer. Although it paid enough to live on he felt unfulfilled and became unhappy with the rat race. He and his wife decided to move to the Dominican Republic for a slower pace of life.

He started to write GERALD, his second novel. The first draft was completed within six months and went through revision after revision until he had it shining like a new penny. James Wymore saw the novel and championed it through a few more revisions and it was published in May 2017 by Immortal Works as his debut novel.

Since finishing GERALD, Carl has completed JAGUAR, the first novel he started, and has also finished writing the second in the GERALD series. He is now half way through his fourth novel about an Anglo Saxon boy. They are all very different and say a lot about his interests in life. Fantastical worlds, animals and medieval England.

When Carl is not writing he paints animals and some of his art can be seen on his website. In Carl’s ideal world he would be writing novels and painting magical creatures such as Dragons, Unicorns and Phoenixes.”

The genre for the series I want to promote is Humorous Fantasy and is for kids aged 11-99 years old, basically a fun read for most age groups. 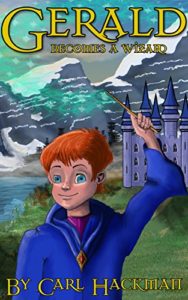 Life as a Royal Equine Poop Coordinator isn’t the life for Gerald. His family business revolves around the rear end of horses and, as far as he is concerned, that is something he is not destined for. The life of a great wizard is on the horizon and Gerald is sure that when he reaches four feet eight his wizarding gene will kick in, and he will become what he has always dreamed of. Of course the fact that no-one in his family tree, as far as anyone can remember, has ever been a wizard could put a kink in Gerald’s plans, but we’ll see what happens.

This is a short story which takes a little peek at the year before Gerald’s dream come true. The journey and actual achievement of his dream was not a smooth ride.

Gerald And The Amulet Of Zonrach (Humor, Fantasy) 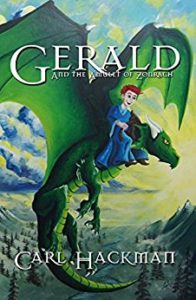 In the realm of Wyverndawn, a wizard’s height is the mark of his power, and shrinking an entire inch is disastrous for twelve-year-old Gerald.

Looking for promotion of an inch or two, Gerald attempts to create a village landmark using his superior wizarding skills. But the spell he bought – from a guy who knows a guy – is a tad more powerful than he anticipates. The resulting earthquake breaks off a chunk of Wyverndawn from the rest of the realm allowing Vabalaz, a highly dangerous wizard, to escape from prison.

A red-faced Gerald is banished from his village and, to complete his shame, is demoted another inch; two more and he’s likely to become a Royal Equine Poop Disposal Coordinator. Gerald’s questionable acquisition of a certain golden amulet could be the answer to his problems. But when Vabalaz discovers it may also be the key to creating his elite wizard realm, Gerald is elevated to evil wizard’s enemy number one.

Gerald’s hopes of returning home hinge on repairing the damage to Wyverndawn and thwarting Vabalaz’s plans. Failure could mean Gerald’s next spell might well be his last.