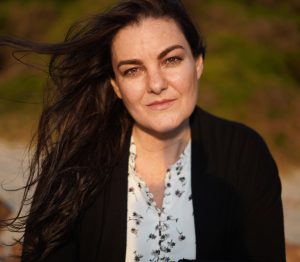 Carolina Ugaz-Moran had a very interesting childhood. She grew up learning different cultures from countries such as Spain, Argentina, Venezuela, Puerto Rico, Peru and the US. She was born in Spain from an Argentinian mother and a Peruvian father. When she was fourteen years old, she moved to the US where she resides.
She always had a passion for science, nature, and animals. Since she was six years old she wanted to study sharks. However, science won her heart and she graduated from the University of Wisconsin with degrees in biochemistry and creative writing. Another of her passions was writing. She wrote her first poem at the age of eight. This poem allowed her to be admitted to a school in Peru.

The Aline series started in 2003 with a string of dreams. By Halloween of 2003, she stitched these dreams together to outline a 6 book series, capturing the adventures of Aline.

In 2015, due to a long business trip, she told her two daughters a 30+ day bedtime story about the adventures of two sylphs. When she completed this story, she realized that not only this was connected to Aline, but it was a piece that she did not know she was missing. She combined the stories leading to today’s 7-book series. 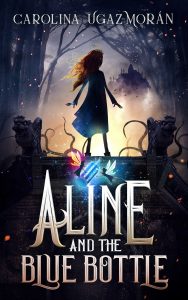 Aline felt she was boring and nothing special ever happened to her. She’s never danced with an enchanted Palace, befriended sylphs, talked with giant cats, faced a massive meteor, or fought magical battle. All Aline knows is a plain life with no friends and horrible school mates. Until…

It all changes on her twelfth birthday when suddenly she is transported to an unimaginable world, filled with magical creatures, where she discoveries and solves secrets. There she finds not only friends but has to go on her first quest. Aline and her friends will need to survive the dangerous perils that await them on their way to find a powerful blue bottle.