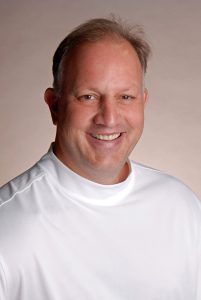 David C. Mahood is a sustainability consultant, environment writer, and poet.  His writing career spans two decades. He has long been fascinated by the natural world and all things therein and has expressed this in a variety of ways from an early age. Mahood holds a BA from the College of Wooster, and an MBA in Sustainability from San Francisco Institute of Architecture.  His articles have appeared in numerous publications including Interiors and Sources, International Ecotourism Society, The Environmental Blog, NEWH Magazine and Living Green Magazine.  His poetry credits include Writer’s Cramp, Fifth Street Review, and Prick of the Spindle.  His first book, One Green Deed Spawns Another: Tales of Inspiration on the Quest for Sustainability, was published in 2017, and a forthcoming book, Kings of a Lonely Kingdom: Earth Day Essays, Poems, and Musings on Nature, is due for release in summer, 2021. 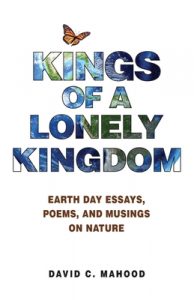 In his latest book, Kings of a Lonely Kingdom, author David C. Mahood shares his passion for preserving nature, biodiversity, and for combating climate change, through ten years of Earth Day essays, original poetry, and related sentiments. Throughout the book, he shares compelling examples of a world in need of greater care in order to bring attention to the unfavorable, long-term consequences of climate change, and the loss of biodiversity. The plights of penguins and pachyderms, whales and wolves, minks and monarchs, and the struggle for clean energy and environmental justice are topics woven into Kings of a Lonely Kingdom. Mahood reflects on the origin and success of the first Earth Day as well as the status of its fiftieth anniversary, which also contains excerpts from a 1972 Earth Day booklet that the author wrote as a nine-year-old, fourth-grade student. The purpose of Earth Day is also expressed by members of today’s youth, from ages nine to thirty-two. Kings of a Lonely Kingdom is a combination of wit and concern and personal stories, a unique appeal for a healthy habitat for all species, and for all times.

One Green Deed Spawns Another: Tales of Inspiration on the Quest for Sustainability (Nonfiction: Nature & Ecology) 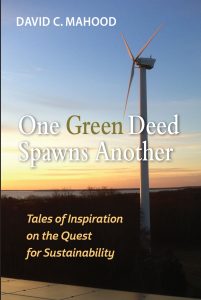 Preserving the environment, this living and breathing apparatus that sustains life for all species in perpetuity, is our collective mission. Within this daunting mission is the need for sharing ideas, goodwill, actions, and solutions to solving the greatest challenge of our times. One Green Deed Spawns Another: Tales of Inspiration on the Quest for Sustainability is a book written by sustainability consultant and author, David C. Mahood. It entails his quest for sustainability and his conversations with his environmental heroes and mentors about sustaining a healthy ecosystem. He chose to do so by asking each of them: If you had one green deed you’d like to see heeded, adopted, and passed on, what would it be and why? The resulting story is a compilation of answers to that question in the context of a twenty-year journey. From green architecture pioneers to green product pioneers, from natural fiber farmers to worm farmers, from Native Americans to marine biologists, the range of ideas is boundless.

The book is twofold in origin: the unusual path the author followed to become environmentally active brought him in contact with some exceptional individuals. Some are as well-known as celebrities; others have flown under the radar.  All of them have equally distinct stories that inspired him and influenced his philosophy on our relationship to our habitat and our fellow species, and changed the arc of his life along the way. One Green Deed Spawns Another is a collection of these poignant moments, and a tribute to the spirit of Earth’s active stewards.