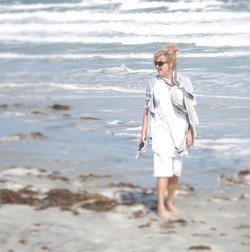 You have heard the one about women over forty are more likely to be struck by lightning than romance? Aww, not so, my friends. Not so! 2015 looks to be a big year for me. I’m getting Medicare and married! I also have a new nickname I sorta fond of, Dixie Burns.

Dixie is a lot like Linda Dickson. She is the one who published “Spit of a Minute” almost two years ago. Ole “Spit” is doing well, and I thank all of you readers. And bless your heart if you reviewed too! I listen to what you say.

While all this was going on, I wrote, “What If It’s True?” This book came about as I was cleaning the kitchen counters. The TV was talking behind my back. The story of football coaches, locker rooms, and young boys was spilling into my thoughts. You know the story I mean. I thought, How could anybody know this was going on and not do something? Which led me to ask myself if I’d ever heard a rumor, suspected anything, or had definite knowledge of something I should have pursued? I had. I heard a rumor. I dismissed it and hopefully, that is all it was. A rumor.

Still, I wonder. What If It’s True?

What If It’s True? (Romance/Suspense) 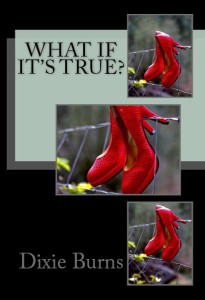 Cedar Hill is a good town, a solid town. Neat and efficient in all its circumstances and the citizens go along to get along. “Nothing” happens over and over. That is until Clarissa Clooney moves to town. A recent, fifty-something divorcee, she is looking to start all over where nobody knows her name. Clarissa suffers the fate of all newcomers in a small Southern town where tongues wag, but few heads think.

Trigger Ray Foley, born in Cedar Hill, is the city’s Chief of Police. He and most of Cedar Hill’s residents live in a comfortable rut. The explosive growth of a new church, lead by a flamboyant minister begins to ruffle the surfaces of tranquility. Suspicion and sordid rumors appear to move in with Ms. Clooney causing Chief Foley and Clarissa to do a little more than cross paths.

The victims do not act like victims.They are not likable or trustworthy. And what do we do with an unlikable victim? What do we do with an outlandish rumor? Like sand in our shoes, we ignore it. Until, the grit in our soles whispers, “What if it’s true?