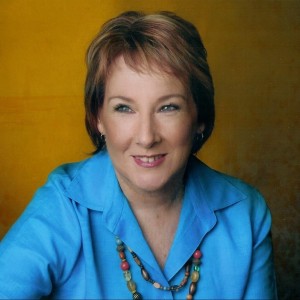 For an inwardly adventurous, but outwardly shy child, reading was a major part of life. Stories such as Enid Blyton’s ‘Famous Five’ adventures fired her imagination and created new worlds for her to explore. Making up stories of her own followed as a natural progression, with Erica holding storytelling sessions for her stuffed toys each evening before bed.

Having overcome her shyness by taking drama classes at her mother’s insistence, Erica became a primary school teacher. She brought her love of story into the classroom, using narrative as a base for the units of work she planned for her students. Her core belief that stories provide children with a means of engaging with, and forming deeper understanding of, the world around them proved most successful in encouraging learning.

When she retired from the classroom, Erica began to write her stories down. ‘It was as though the time was right to be writing. The ideas were there and I had to let them escape from my brain and sort themselves out on paper.’
Erica’s characters are average kids. They do not have any special powers. They do not live in any fantasy worlds. Quick wits and keen observation skills are their weapons.

The main character, Taya, is the adventurous little girl that Erica longed to be. She has the adventures that Erica dreamed of having. She is a child who wonders about things and likes to figure out puzzles. She can be a scaredy-cat and she can be amazingly brave. She and her friend, Chris, are likeable kids with whom young readers can easily identify.

Who wouldn’t want to be out and about solving mysteries and having adventures?

Erica still lives in Brisbane with her husband and their two mischievous dogs. 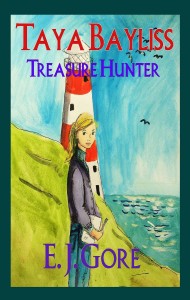 Taya is not happy when her family moves from the city to a tiny fishing village. Almost immediately, she finds herself mixed up in a fifty-year-old mystery. She befriends an elderly lady called Mae who seems to hold the key to a vast treasure.
But is there really a treasure, or is it all just imagination?
Is the painting a clue, or is it merely a keepsake?
Two local boys certainly think the treasure is real and spend their time making life difficult for Mae.
Join Taya as she tries to help her new friend, outwit the bullies and sort out the clues.
Are you a treasure hunter too? 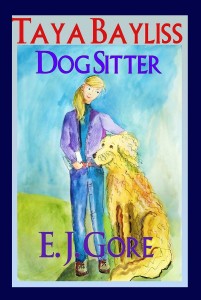 Taya volunteers to dog-sit the mischievous Minette for the summer holidays. Minette’s sneaky ways bring a spate of neighbourhood thefts to Taya’s attention.
When she witnesses a robbery, Taya thinks she can identify the thief. But is she on the right track or completely mistaken?
Has Minette really found a clue?
Who is the Biker Bandit?
Taya and her friend, Chris, find themselves in some tricky situations, and even deadly danger, as they try to solve this mystery. 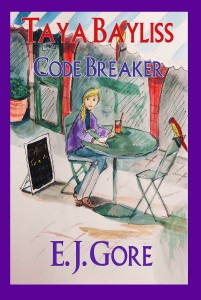 The Bayliss family is on the move again, this time to Narralong, home of the famous Splinter Island Bird Sanctuary. Taya’s father is there to investigate a change in the breeding habits of the native birds, or so he says.
Taya has a bad feeling about this trip, and an injury to Chris seems to confirm her fears.
A recurring dream, a series of lies and the discovery of a body on the beach lead Taya to suspect that her father is involved in something far more serious than he is saying.
Join Taya as she struggles to crack the code. 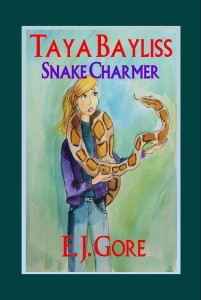 Spending the long weekend at the Comino farm turns out to be far more scary than Taya has expected.
While planning a joint birthday party, she and Chris come across several interesting items in the attic, including a carpet python. Snakes are definitely not Taya’s favourite creatures. Taya thinks one of the items she has found could prove the innocence of Chris’s Uncle George who is in jail for theft.
Her persistence annoys Chris, but the hint of a mystery is irresistible to Taya
If George didn’t steal the ruby cross, who did? Who is Bryan?
Where is the cross now?
Taya has to face up to her greatest fear as she tries to put the clues together.
Could you charm a snake?