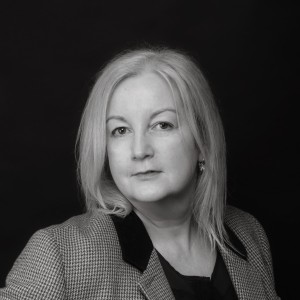 Ella Carmichael came late to writing, having – somewhat ironically – written herself off as an author many years earlier. She currently lives in a small town in the UK, where she obsesses about the shortcomings of modern technology, while simultaneously drooling over computers with really big screens. She adores Netflix and sugar, but abhors reality TV and mustard.
She loves detail, and becomes extremely frustrated by individuals who insist on speaking in bullet points. Those individuals, in their turn, would happily shoot her. Except, of course, the UK has very strict gun control, and the Brits aren’t inclined to carry unlicensed firearms in their handbags and briefcases. Ella loves to hear other peoples’ stories and is fascinated by the human condition. She firmly believes that our flaws are what make us interesting, and that humans were not designed for perfection – a most boring state of affairs.
Fortunately for Ella, she has never met a non-flawed human, and consequently continues her quest for the next great story without perfection getting in her way.
She got the idea for the Miracles and Millions Saga during 2010 when she was recovering from a breakup with a most unworthy man. Characters began appearing to her and, after much soul searching, she eventually made the decision to put hands on keyboard and record their adventures. The result is what one reader describes as ‘a really long story carved up into ten slices’. True, true and true again. Other readers have described the series as being similar to a TV series or soap. Totally true, although I challenge you to find a more addictive storyline than the one involving Dorothy Lyle and her gang.
Ella is not working on anything new at present, unless you count Netflix. 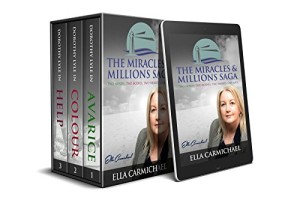 The first three novels in the romantic, suspense, supernatural series, entitled
THE MIRACLES AND MILLIONS SAGA

Who is Dorothy Lyle?
She’s a woman who appears super-normal at first glance. She resides in a modest house in a small Irish town, and commutes to a typical office. She’s a lone parent who misses her children now that they are at college. Yet Dorothy is so much more than the obvious. She is a powerful psychic who has been masquerading as normal for twenty years. She is also a woman who has been avoiding men since a nasty breakup and divorce left her reeling in shock while still in her twenties.

The winds of change begin to blow around Dorothy as she approaches her fortieth birthday. An unfortunate affair of the heart means that her daughter, Diane, has distanced herself from her former home and doting mother. Dorothy wonders if some extra cash might alleviate the immediate problem.

Enter the lottery and one hundred and eight-five million tax free dollars.

DOROTHY LYLE IN AVARICE – BOOK 1. Join Dorothy on the first leg of her rollercoaster journey as she discovers what an emotionally charged and complicated experience dealing with unexpected wealth can be. Clairvoyance may in handy on occasion, but it doesn’t help you decide who gets what!

DOROTHY LYLE IN COLOUR – BOOK 2. Relax with Dorothy as she begins to truly enjoy her wealth and changes in fortune. Only for her new-found pleasure to be jeopardised by a tarot card reading of all things! Once again, change is afoot, although this time it’s of a sinister nature.

DOROTHY LYLE IN HELP – BOOK 3. Watch what happens when Dorothy concedes that she cannot protect herself alone, and sets out to hire professional help. Ever wondered what it would be like to come face to face with your other half? The half you weren’t fully aware was even missing. And if he happened to be in a bad mood at that momentous moment, do you think it might colour your judgement? Read on, folks, and find out the answers to these questions and about a hundred more. 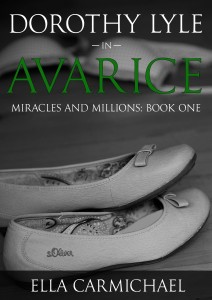 THE MIRACLES AND MILLIONS SAGA
Two minds, two bodies, two hearts, one soul.
On the day that Dorothy Lyle turns forty she is still single and living a boring, routine existence of a nine-to-five life. This has never been part of her great life plan, and is a niggling and constant source of frustration.
That all changes, along with her life, forever, when she unexpectedly wins a fortune on the lottery and is propelled into the realms of the super-rich elite. Everything that money can buy suddenly comes within reach for her.
And while Dorothy likes the idea of being rich beyond her wildest dreams, she soon finds that it will bring its own set of problems. A set of problems compounded by her unique and amazing ability. In the old days, when she had been just plain old Dorothy, it had been easy to hide her psychic powers. But now it’s going to be so much harder.
Since the age of nineteen she has been aware that a shadowy presence travels with her, providing solace and protection. When her dreams and visions start to become more vivid and frightening than usual, she wonders if any amount of money can protect her from her own gifts, or indeed the elusive and occasionally menacing figure that stalks the fringes of her mind.
Welcome to Book 1 of the Miracles and Millions Saga. A story of hope. Be prepared for HUMOUR, IRISH MAMMIES, WEIRD VISIONS AND PROFANITY – IRISH STYLE.
Not a standalone novel. This is chapter 1 in the extraordinary adventures of Dorothy Lyle and her entourage.