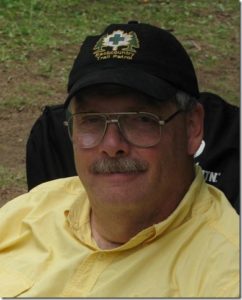 I began writing fantasy in 2016, after my wife, Ellen, was diagnosed with cancer. It really took off a year later when she was declared in full remission and was able to start helping me. When I was a park ranger and, before that, a paramedic, I used to write articles about my areas of expertise. Now, I am writing the tales that have played in my imagination for over 60 years. My stories are epic fantasy with a Biblical world-view, and we test everything by how our teenaged granddaughters would react to it. I hope you enjoy the adventures and will join us on the journeys with Connor, Iolena, Menta Kai, and Fiona!

Truthbearer: The Journeys of Connor Clark: The Gewellyn Chronicles, Book I (Fantasy) 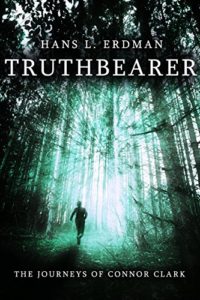 Forced to witness the execution of his wife for refusing to renounce her faith, Connor Clark escapes his captors and seeks refuge in the forest. There he encounters the wizard Padraig, who leads him into the Juncture of the Nine Worlds. Then, the adventure really begins!Connor is given a quest, to bear the truth about the rise of the Dark Magic to the Nine Worlds. Accompanied by two elves from the Aerielands, the beautiful Ranger, Iolena, and the impetuous bounty hunter, Menta Kai, Connor must learn to separate friend from foe and truth from lie, in the Realm of Gewellyn, where the magic has died.

Coming in “The Gewellyn Chronicles” Connor, Iolena and Menta Kai’s Journeys continue in “Truthbearer: Beyond the Aerielands”! And in “The High Sheriff of Gewellyn” and “The Healers.of Gewellyn”, Connor Clark’s family, transplanted from First Earth, find their way in a strange land of elves, eagles and Raiders, where justice and medicine confront both dark and deep magic, in the exciting follow-ups to “Truthbearer”!

Trinity of the Truthbearer: The Journeys of Connor Clark: The Gewellyn Chronicles, Book II (Fantasy) 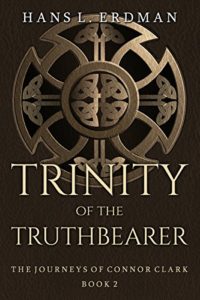 BEHIND EVERY GOOD MAN IS AN EXTRAORDINARY WOMAN… OR TWO.
Connor Clark is a strong man in body and spirit. But he is nothing without his soulmate, the beautiful Iolena Yaleria, and their adopted daughter, Menta Kai, by his side. It’s a lesson that Connor learns the hard way when he tries to confront the Dark Lord, Declan Dhark, on his own, and almost loses everything worth living for. Admonished by his friend and mentor, the wizard/cleric Padraigh, Connor vows to never split up the Trinity again. But Lord Dhark will not be denied. He will send a team of 20th-century Irish assassins and even a steam-driven tank to try and stop Connor from carrying the Truth to the Nine Worlds. The lies and deception are so strong that even the act of Confession may not succeed in finding the truth. From the Queen of Hevanok, to the pub in Bolandria, to the streets of Gewellyn itself, and across the shimmering portal of the Bridge above the stars, Connor and his Elven wife and daughter race the Dark Lord’s forces to save a child and bring the Truth to the remaining six Worlds, facing new danger and new adventures at every turn.

Truthbearer 2: Trinity of the Truthbearer, the exciting sequel to Truthbearer, is the second book in the Journeys of Connor Clark. 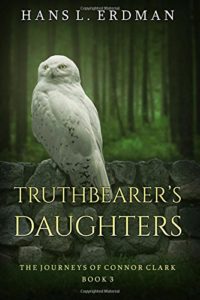 FAMILY FIRST! FAMILY FIRST ALWAYS! These are the words that Connor Clark and his beautiful wife Iolena Yaleria live by. These are the words that mean everything to the Truthbearer and his Guardian, and the four daughters who are their family. Alenia, the fiery, redheaded Captain of the Borderlands Rangers, shares her mother’s green eyes and passionate love for the Aerielands, and the oldest daughter’s sense of duty to her family. Whenever and wherever her family needs her, she is there. Shannon, born of First Earth, the mother of Connor’s granddaughters, is the Queen and High Sheriff of Gewellyn. The consummate police officer, her only fear is that which she cannot control, until the Deep Magic gives her reason to live for more. Menta Kai, the adopted daughter; A former slave, fiercely devoted to Connor and Iolena, she is the child of prophecy who will rise, with her daughter Princess Lona, to become the greatest she-elf in the history of the Nine Worlds. Fiona, born in the future, raised in the past and united with her family in the present, is the mirror image of her mother and a woman of great beauty and amazing magical power. Trained to be an assassin, she is the White Owl, the Guardian of her sister Menta Kai, the Great High Queen of All the Elves. Four amazing, beautiful women willing to do anything for each other and for their parents as they carry the Truth to the Nine Worlds; they are the Truthbearer’s Daughters. “Truthbearer’s Daughters” is the third book in the epic fantasy series, The Journeys of Connor Clark, the Gewellyn Chronicles.

Song of the Truthbearer: The Journeys of Connor: The Gewellyn Chronicles, Book IV (Fantasy) 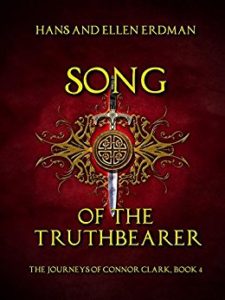 The Song: The Words of Prophecy set down by the Singers, Jaed and Jessa Silvarin, that foretold the future of the elves in the Nine Worlds. The Song sings of the union of the Green-Eyed Elf Queen and the Man from Another World. It tells of the coming of the White Owl, the High Guardian, and Queen, with one foot in Eyru’s Land and the other in the Aerielands. But most of all it foretells the rise of the greatest she-elf in history, Menta Kai Lee Silvarin Yaleria-Clark, the Great High Queen of All the Elves in the Nine Worlds, and her daughter, Princess Lona.

Hidden by the child, Kai Lee, hundreds of years ago after her parents, the Singers, were murdered by the Dark Druid, she returns as Menta Kai, to find the prophecy with her new parents, the green-eyed Iolena Yaleria-Clark and her husband from First Earth, Connor Clark. But what they find is so much more than what they expected, and what it foretells will shake the very roots of the worlds of elves and men

“Song of the Truthbearer: the Journeys of Connor Clark, Book 4,” is a new chapter in the Gewellyn Chronicles, and the quest to take the Truth to all of the Nine Worlds. 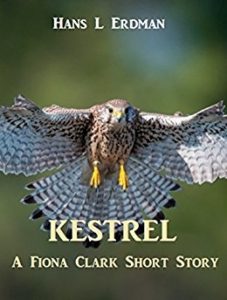 A story of faith, family, and friendship, the prologue to the legend of the White Owl.

To Alistronia Skystormer anger, loyalty and pride were more important than compassion, friendship, or love. Purposefully aloof, and virtually friendless, Alastronia preferred it that way. Connections with other people tended to get messy, and dealing with others from a position of strength was superior. She thought she didn’t need friends, didn’t want friends, and then she met Fiona. She didn’t know she could fly, until her best forever friend was the White Owl, Guardian of the Great High Queen. Together, Fiona Yaleria-Clark, Alistronia Skystormer and the eagle Zedekiah will change the skies over the Aerielands and Ireland, forever. 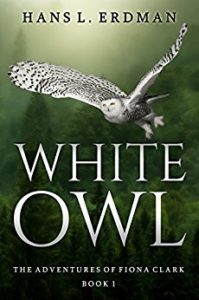 Fiona Bridget Yaleria-Clark is the youngest daughter of Connor Clark and his Elven wife, Iolena. Born 150 years in the future, and hidden deep in the Irish past to save her life, she was reunited with her family in “Truthbearer’s Daughters.” Fiona is impetuous, brash and beautiful, the mirror image of her mother. She is also blessed with the strongest Deep Magic in a very magical family. Her unshakable faith in the Holy Trinity and her family are the rocks on which this half-elf stands.

High Guardian and mother to her adopted daughter, High Princess Lona, Fiona is supported by her fiancé Berian, her best friend and fellow shapeshifter, Alastronia, and the eagle Zedekiah. When they discover an abandoned castle on the northern reaches of the Aerielands, Fiona starts to seek answers which result in her abduction by her family’s nemesis, the Dark Druid, and her return to fifth century Ireland where she was raised by Mother Bridget of Kildare.

But Ireland is as much Fiona’s home as the Aerielands. If she can make it back to Kildare Abbey, she will gain the power that was promised to her in prophecy, to defeat the Dark Druid and the Dark Lord, Declan Dhark. With her new friends, Fillian the leprechaun and the Wolf King, Cormac Mac Art, she will race against time and history, and come face-to-face with herself, while her family searches to rescue her and bring her home.

And then there’s the wedding to plan for…

“White Owl: The Adventures of Fiona Clark” is the first installment of this new series of The Gewellyn Chronicles. An exploit filled with real-life and legendary characters from the history of Ireland, new friends in the Aerielands, and the family that will take the Truth to the Nine Worlds, together.

An Bhanrion (The High Queen): The Adventures of Fiona Clark, Book 2 (Fantasy) 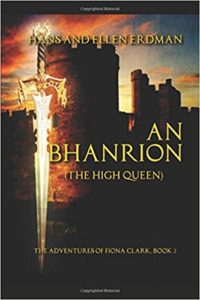 For thousands of years, there had only ever been one An Bhanrion, one High Queen of the Aerielands and Ireland, one Queen with one foot planted firmly in the land of elves and the other foot planted in the land of men. That Queen was Eyru the Magnificent, the first Great High Queen of All the Elves in the Nine Worlds, and since she walked on to the Great North millennia ago, there has been no other… Until now. Menta Kai Lee Silvarin Yaleria-Clark is Eyru’s successor in the worlds of elves, the new Great High Queen. However, it is her younger sister, Fiona Bridget Yaleria-Brice, who is the new An Bhanrion, the heir to Eyru the Magnificent. From her ancient and isolated castle, Caer Aerie, high in the Borderland Mountains of the Aerielands, Fiona is content to teach and raise High Princess Lona, Menta Kai’s heir. And then a redheaded young woman comes through the portal from Ireland with an invitation from Ireland’s first High King, Cormac Mac Art. The young woman is his daughter, Aillbe, and Cormac asks Fiona to adopt her. Fiona, her husband, Berian Brice, and her best forever friend, and fellow shapeshifter, Alistronia, agree to the Wolf King’s request, and Aillbe Nic Cormac becomes Abilynn Enya Yaleria-Brice. But what mysteries and magic surround this amazing young woman, and why is the Druidess Achtan so fiercely determined to bring her back to Ireland and certain death? To find the truth, the Truthbearer’s daughter will have to return to the land where she was raised, and learn what she needs to do to protect the daughter she has come to love more than her own life, from powers of darkness more ancient than the Aerielands itself. “An Bhanrion” is the second exciting Adventure of Fiona Clark, and Book Six of the Gewellyn Chronicles, the ongoing saga of faith, family, and friendship that began in “Truthbearer: the Journeys of Connor Clark.”