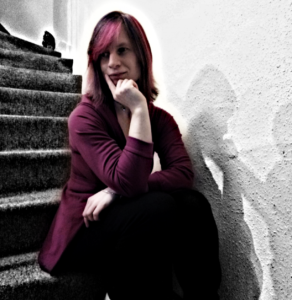 Ila Golden started telling stories at a young age, entertaining her siblings on long car journeys and rainy afternoons. Her love of storytelling became a love of writing as she moved through her teens and graduated from Winchester University with a BA in Creative Writing and Drama.

It was at university she first found herself a small but loyal audience, writing fanfiction. Although she’d always been passionate about her writing before, it was the enjoyment of her readers that really spoke to her, motivating her to continue to develop and grow, both as an author and as a person.

Alongside the fanfiction, she also worked on several original projects, self-publishing her first two books in the late 2000s and early 2010s. The latter book, Zero Conformity, she later sublimated with a year and a half long prequel blog series, onthealicia.blogspot.co.uk. It’s here, as on track as things appeared, health issues forced her writing career onto the back burner.
During the ups and downs of these years she refocused on her writing, with a new set of experiences influencing her work. She used this time to rework the fanfiction series which granted her that original, small audience, and reposted it on a new site for a new audience to enjoy. She also slowed down the pace at which she wrote, allowing her true strengths as a writer to mature along with her.

In May of 2017, spurred on by several personal tragedies, she stepped back into the self-publishing world, releasing Echoe, in both eBook and paperback forms. Although Echoe has no sequel, her follow-up book Hyena Boy is set for release later this year. She also manages multiple video series, such as her writer’s VLog and Ila Reads, on her YouTube channel, IlaGolden. 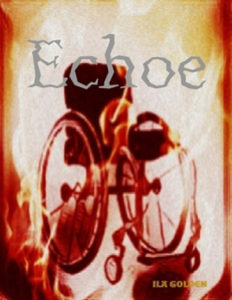 Choice can change everything.

As a Neeth Nymph in the world of Enchanted Breeds, Echoe Sweetcharm has acting in her blood. For her, however, this calling is blocked by her grandpatch and family patriarch, Allonzo, who tries to turn her chair into her curse.

Despite him, she forges on, building her career as a writer and director, staying close to her dream. After Allonzo’s passing, the stage pulls her once more, and she makes one more attempt to grasp her dream on the center-stage, auditioning for ‘The Next Heartbeat’.

Soon, however, she truly feels cursed, as accidents place her life inexplicably into greater danger. But her grandpatch can’t really have anything to do with this, can he…? Just what in the world is going on?