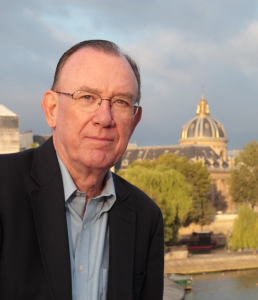 John Pearce has spent decades learning about Paris and is now putting all the information he’s gathered into his thrillers. “Treasure of Saint-Lazare” and “Last Stop: Paris,” the two published so far, are cerebral mysteries featuring Franco-American businessman Eddie Grant and his lovely bride Aurélie Cabillaud, a Sorbonne professor. Together they have tracked down a 15th-century painting that disappeared just as the Nazis were being pushed out of Poland at the end of World War II, and the evil genius behind the death of Artie’s family years before. A third novel, adding new characters, will be the next in the Eddie Grant Series. 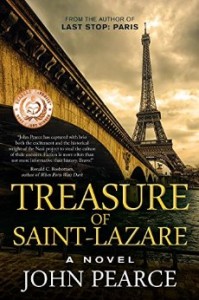 A hidden treasure. A murderous plot. A love that won’t let go.
Eddie Grant’s life hasn’t been the same since his wife and young son were brutally murdered in Paris ten years ago. He has given up hope of finding the killer when Jen, an old flame from 20 years before, appears on his doorstep bearing a letter from the grave — It may be the key to the mystery. It sparks a chase across Paris, to a chateau in the Loire, and to Sarasota, Florida, in search of the killers and a priceless painting that was stolen by the Nazis and a truckload of gold. And it rekindles the passionate affair he shared long ago with Jen. (Based on the theft of Raphael’s “Portrait of a Young Man” in 1939.) 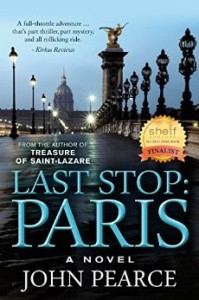 Eddie Grant has followed the trail of his family’s murderer back to a shadowy gang of international thieves and weapons merchants with tentacles stretching from Miami to the Black Sea, but always leading back to Paris. In this exciting sequel to “Treasure of Saint-Lazare,” Eddie flushes the gang out of its hiding place near Munich and chases it back to Paris before making sure the evil mastermind at its head makes his last stop. Gorgeous, romantic Paris is a main character in this page-turner.