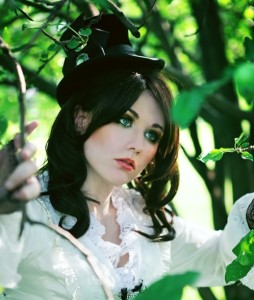 Lia Habel was born in Western New York, and has lived there the majority of her life. Maybe that explains her ongoing obsession with finding the beauty hidden beneath the terrifying exteriors of her characters–she’s always loved the cold, crystalline quiet that follows a good blizzard! Lia is best known for creating unapologetically monstrous heroes. Her most recent book, Familiar Things, is a magical take on small-town life set in an alternate 1950s universe. Miss Habel enjoys attending anachronistic and steampunk events, sewing all manner of things, and spending time with her boyfriend and their beloved black cat, Struensee. 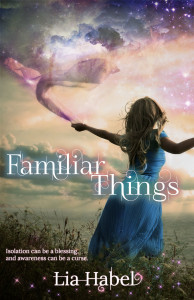 Sixteen-year-old witch Everrose Morgantwill isn’t sure which monster is causing her more trouble—the ten-foot-tall wildcat she’s attracted as her familiar, or her emotionally unstable boyfriend.

Half her spells go nowhere, and people always have trouble remembering her name, but even so—Everrose’s life is idyllic. Born and raised in All Hollows County, a secretive world created by powerful witches and warlocks for the protection of the magically inclined, she’s never had to fear persecution. In All Hollows, magic is used openly. A great spell known as the Nestle Ward isolates and protects it, though there is one odd little side effect.

Between sewing the perfect high school wardrobe, experimenting with red lipstick and cake mascara, and dreaming about prom, Everrose has a lot on her mind. When her steady boyfriend returns from a trip to “the Layside” a changed warlock, however—she notices. Handsome Vincent Olwen was affectionate and self-effacing when he left, but he’s come back acting sullen and withdrawn. Everrose is lost for an explanation—and lost for what to do.

Troubled by the changes she sees in Vincent, Everrose tries to distract herself by searching for her first familiar—a rite of passage for sixteen-year-olds in All Hollows. But when she does make the Connexion, it’s with the last animal she would’ve ever expected—a massive, terrifying wildeor called a trothenbeast. Only powerful witches and warlocks attract wildeors as familiars. Yet, when it comes to magic, Everrose is completely inept. It makes no sense. Weirder still, the beast fails to alert Everrose to the presence of magic, and refuses to shadow her. In short, he doesn’t act like a protecting, guiding familiar animal at all.
Faced with all of this, Everrose is just about ready to throw in the towel. Before she can, though, she learns that the trothenbeast has been cursed by an evil witch named Ebonella Rosu—and that Ebonella wants him back.

Everrose must contend with a witch who wants her dead, a familiar who needs her protection, and a boyfriend who’s changing before her eyes. When she finally reaches out for help, she finds it from an unlikely source—her boyfriend’s moody, somewhat mysterious father, the mayor of her little town. What secrets does Roderick Olwen harbor? And what do they have to do with Everrose herself?