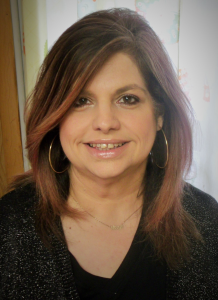 Margo L.Azzarelli is a historian/researcher specializing in local history. She writes a bimonthly column for Our Town, Lackawanna County. An award winning author, she has written three books with Arcadia Publishing (Taylor, Green Ridge, and Old Forge and Moosic), and recently released her fourth book, Lackawanna County Chronicles. Azzarelli writes and produces historical programs and plays, such as, 1877 “Riot on Lackawanna Avenue”, and is the director of the annual Forest Hill Cemetery walking tour.

Mrs. Azzarelli volunteers for the Lackawanna Historical Society and is the second vice-president for the Triboro Historical Society. She lives in Scranton, PA with her husband, Dominick, daughter, Marnie and houseful of fur babies. 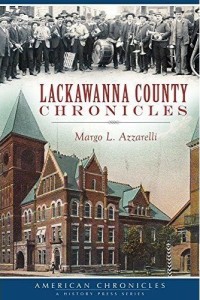 The green hills and bustling boroughs of Lackawanna County have fostered a remarkable history of pioneering citizens and momentous events. Dr. Mary C. Nivison became the first female physician in the city when she opened her Scranton practice in 1871. Audiences were amazed in 1915, when Harry Houdini escaped from a large cask of beer at the Poli Theatre. The Pennsylvania county had its share of mayhem and tragedy as well. In 1923, the Laurel Line bandits held up the train between Moosic and Avoca, and nineteen years later, the flood of 1942 sent waters rushing down Carbondale’s Main Street. From the stories of the Great Riot of 1877 to memories of the Club Burger at Carrol’s Restaurant, local author Margo L. Azzarelli chronicles the history of Lackawanna County with this fascinating series of vignettes. 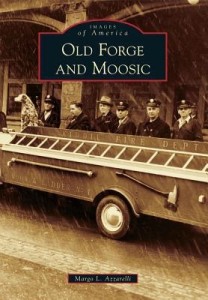 Moosic was incorporated as a borough in 1898 and was followed by Old Forge shortly thereafter in 1899; these communities became a part of the area of Lackawanna County known as the Triboro. Throughout the years, industry and agriculture were the backbone of the local economy, and businesses like the Moosic Powder Company and Dutchess Underwear Company provided many residents with employment. In 1886, Arthur Frothingham purchased land in Moosic and opened Rocky Glen Park, the second oldest amusement park in Pennsylvania. Visitors enjoyed riding on the popular Million Dollar Roller Coaster until it closed its gates in 1987. Julia’s Restaurant/Hotel is one of the oldest landmark establishments in Old Forge, and it is still in operation today, serving great food nightly. By the 1960s, Old Forge earned the title of Pizza Capital of the World. Its trademark Old Forge style pizza is served in many restaurants throughout Pennsylvania. 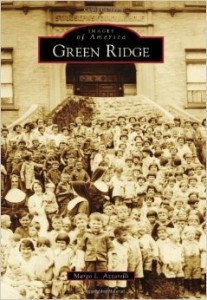 The honorable George Sanderson founded and developed Green Ridge, appropriately named for a green forested ridge in the middle of the Lackawanna Valley. The small village was incorporated into Scranton in 1866 and became home to many of the city’s prominent doctors, lawyers, entrepreneurs, and politicians, such as Edward Baker Sturges, the organizer of the first electric street railway, and US vice president Joseph Biden. Many large and beautiful mansions were built in Green Ridge, and some remain today as reminders of times gone by. Once only forest and farmland, Green Ridge has grown into one of the finest residential sections of Scranton. 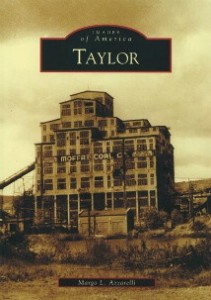 On November 23, 1893, Judge R. W. Archbald signed the decree making Taylor a borough. A century earlier in 1782, Cornelius Atherton, originally from Massachusetts, became Taylor’s first permanent settler on a hill overlooking Keyser Creek. He and his family helped to build what was then a small farming community. The birth of the railroad brought with it a change of industry. In the mid-1850s, the Union Coal Company sank a shaft, built a breaker, and began to ship coal. When the company went out of business, New York City financier Moses Taylor bought up the abandoned coal land and reopened the mines. What was once called Unionville was renamed Taylorville in his honor, and this was later shortened to Taylor. Through vintage images, Taylor documents the many transitions of this tight-knit community.