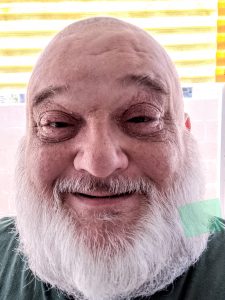 Michael Fiorenza, or Mike as he is known to his friends, currently resides in southern California as a caretaker. He is a proud single father of one and the youngest himself of six. Mike is gentle, gregarious, and jovial with a passion for all American sports, arts, and anything academic. He played a geek position, offensive line, on the varsity football team in high school. He grew up to tales of WWII and developed a love of reading history like many of his siblings. He sought and received a BA in History from Chico State. A true renaissance man, Mike also served in the United States Navy, graduated from Le Cordon Bleu International, perfected his green thumb, and started his authorship. A huge fan of Sci-Fi and Fantasy, he will proudly tell you about getting to stand in line to see A New Hope, on the very first Friday, in May 1977. He enjoys reading and watching a wide variety of genres — history would be his favorite non-fiction. However, when it comes to fiction, his passion is Sci-Fi, and that is the genre of his first novel.

2060
The Centennial of Rock & Roll is in full swing,
Geniuses are mapping the recently discovered Multiverse.
By boring micro wormholes through Spacetime, they are able to retrieve e-formation from other universes.
They are searching for any anomalies or abnormalities between the Universes.
Any differences at all!
After only a few hundred Universes, History appears to remain static.
Hitler dies in WWI, but nothing changes!
JFK dies in WWII, but his brother Joe doesn’t, survives, to become President, only to be assassinated in Dallas on 11/22/1963.
With so much data to analyze, and culture lower on the list vital information, something as simple as a band of musicians.
Who is Corporate Delicacy?
Why do they exist?
Where did they come from?