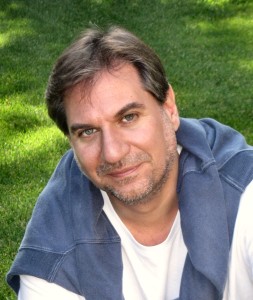 Nicholas C. Rossis lives to write and does so from his cottage on the edge of a magical forest in Athens, Greece. When not composing epic fantasies or short sci-fi stories, he chats with fans and colleagues, writes blog posts, and enjoys the antics of two silly cats and his baby daughter, all of whom claim his lap as home. His books have won numerous awards, including the Gelett Burgess Children’s Book Award.

In addition to his best-selling series, Pearseus, he writes short science fiction/speculative fiction stories, many of which have appeared in various collections and anthologies. These include Infinite Waters, which was voted one of the best 50 Indie books of 2015.

What readers are saying about Nick’s fantasies:

“Most avid readers still have books from their childhood which they read over and over again. ‘Runaway Smile’ has joined the list.”

“From the very first sentence I realized I was not reading a book, I was going on an adventure.”

“Each story is like watching an old episode of the Twilight Zone.” 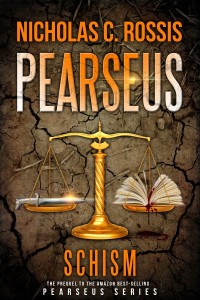 It’s New Year’s Eve, the year of 2099, but the distinguished guests aboard the Pearseus won’t get to countdown seconds; soon they’ll be counting bodies and survivors after the spaceship’s crash landing on another planet.

The good news? The planet is seemingly hospitable both in resources and in terms of the natives’ attitude towards earthlings.

The bad news? They might have come on this planet bare of possessions, but what they haven’t been able to shed are the shortcomings of their human nature. Will that be the sole threat to a unified future, or is the new land and its first inhabitants not as innocent as they look?

Schism is the prequel to the Amazon best-selling series, Pearseus. 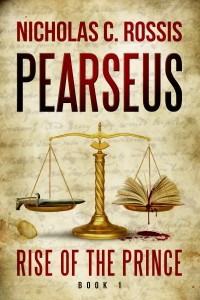 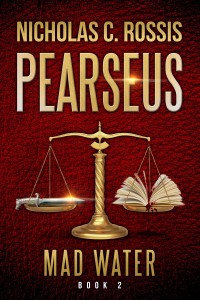 In the second book of the Amazon genre best-selling Pearseus series, the incessant scheming of the various players and their nebulous puppet-masters has brought about major change. Cyrus is now the new ruler of the Capital, struggling to fight Jonia’s revolt along with his own demons. Gella strives to keep abreast of Teo’s devious plans in order to end the war with Jonia. And Lehmor’s struggle to reunite with Moirah brings him to uncharted territories, where the enigmatic Iota play with minds, senses and the future of the entire planet.

Old foes and unlikely new friends appear as invisible forces continue to tear humanity apart. Masks drop to reveal the ultimate truth: on Pearseus, everyone has their own agenda. And they’ll stop at nothing to achieve it. 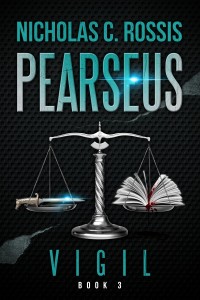 It’s a time of hardship on Pearseus. Teo Altman has assumed control of the Capital and has his eye on Parad’s children. Pratin and his monsters have laid siege on Malekshei. The Old Woman has forsaken Lehmor and the First. And Sol is preparing for the Capital’s inevitable invasion.

Humanity’s defenders are outnumbered and outgunned. Fighting for their lives, their only hope lies in raising an ancient army. To survive, they must do the unthinkable: wake up those that have been dreaming under Pearseus for a hundred thousand years. 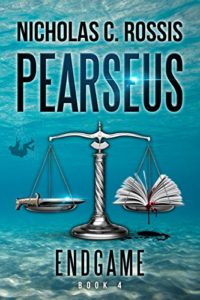 Would you save those who murdered your world?

Cyrus will risk everything to gain back his throne. But new enemies are waiting for him; enemies that will stop at nothing to destroy humanity once and for all. With the Capital invading Anthea and the north in turmoil, every step of the journey is fraught with peril. In a world falling apart, can Cyrus and his friends prevent humanity’s extinction?

“A creative and unforgettable series that will one day become a gem among sci-fi fantasy books.”
~ Janice Spina 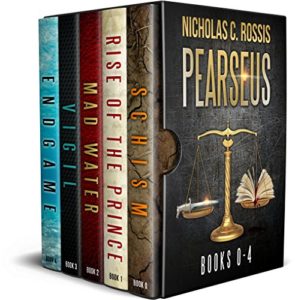 Could You Save The Woman Who Killed Your Son?

Sci-fi fantasy filled with intrigue, murder, and betrayal. Fans of Game of Thrones and Dune have an exciting new fantasy series to devour.

Terrified of an ominous prophecy and spurred on by a shadowy advisor, a cruel ruler sends the young son of her favorite General to be executed. Soon, however, she must beg the grieving father to save the country from an invading army. Now, the General faces a stark choice between revenge and honoring his vows, unaware that his son’s fate and that of the entire planet are inextricably linked.

This bundle includes all books from the best-selling sci-fi fantasy series plus bonus material. 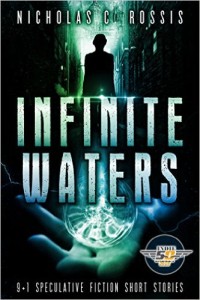 Voted one of the Best 50 Indie Books of 2015, Infinite Waters contains ten speculative fiction short stories and flash fiction, written by the award-winning author of Pearseus and Runaway Smile.

These ten stories explore our perception of the world around us. Is there more to the world than we can see? How far can we trust our senses? And in a digital society, can any of us tell what’s real?

A writer seeks her future at a carnival, but gets more than she bargained for. A disgruntled twin discovers that blood runs thicker than water, especially when you spill it. A high school student just loves to experiment. And a bully learns that nothing is scarier than a supermarket.

“Nicholas Rossis is a master of the craft… I found myself looking forward to coming home so I could dig into the next story. Each story pulls you in to its unique little universe and takes you on a ride where the tracks are hidden, and you can’t see the corners up ahead.”
– Nat Russo

The Power of Six (Science-Fiction/Short Stories) 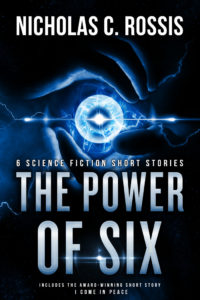 Six science-fiction short stories written by the author of Pearseus, the epic fantasy series that has reached #1 on Amazon.

Although they seem to be concerned with various themes, there are certain passions that run through them, almost obsessively. What is the nature of reality; digital and corporeal? Is there more to the world than we can see? How far can we trust our senses? What are the consequences of our actions, and is it possible to change them? And if so, would we simply repeat same mistakes, or make new ones?

The anthology includes “I Come in Peace”, an award-winning short story that deals with a tortuous question: how far would man go to alleviate his loneliness? Readers of Pearseus will certainly recognise here the birth of the Orbs.

Humorous and poignant, these short stories are exciting, intriguing and imaginative. 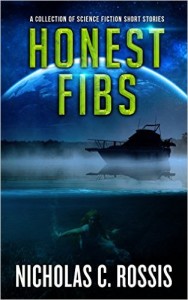 A mermaid turns out to be the perfect bait. A young man in the Badlands discovers the price of business. And a man desperate to escape his life finds out he’s not the only one.

These are just a few of the stories in Honest Fibs, a collection of speculative and science fiction short stories that explore our perception of the world around us. Is there more to the world than we can see? How far can we trust our senses? And in a digital society, can any of us tell what’s real?

Nicholas Rossis is a master of the craft… I found myself looking forward to coming home so I could dig into the next story. Each story pulls you into its unique little universe and takes you on a ride where the tracks are hidden, and you can’t see the corners up ahead.

You’re in for a Ride: A Collection of Science Fiction Short Stories (Science-Fiction/Short Stories) 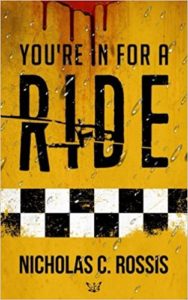 A force field stumps a group of intrepid explorers. Two time-travelers mess with time at their own peril. And what happens when not one, but two dark prophecies clash head-on?

These are just a few of the stories in You’re in for a Ride, a collection of speculative and science fiction short stories that explore our perception of the world around us. Is there more to the world than we can see, or can our senses deceive us?

” Each story is like watching an old episode of the Twilight Zone”
~ C. MacKay 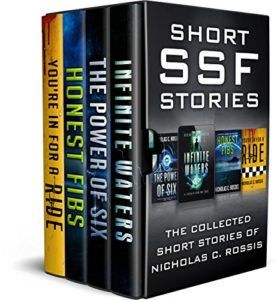 This omnibus edition includes four collections of science/speculative fiction short stories including Infinite Waters, voted one of the Best 50 Indie Books of 2015.

“Each story is like watching an old episode of the Twilight Zone”
~ C. Mackay

“I read all stories in one sitting. And found them tumbling around in my head later, when I was trying to fall asleep.”
~ Anita Cross

“Nicholas Rossis is a master of the craft… I found myself looking forward to coming home so I could dig into the next story. Each story pulls you into its unique little universe and takes you on a ride where the tracks are hidden, and you can’t see the corners up ahead.”
– Nat Russo

Runaway Smile: An unshared smile is a wasted smile – Niditales, Book I (Children’s) 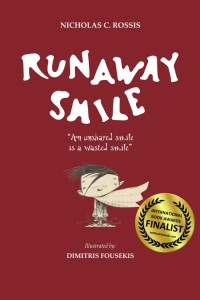 “I woke up this morning and I had lost my smile and it wasn’t my fault and I looked everywhere and it was gone. Then I met a workman and a king and the best salesman in the world and a clown and no-one wanted to give me theirs. At school, I asked Miss to give me hers, but she gave us a pop quiz instead, and then no-one was smiling and…”

A little boy’s smile runs away until it owner learns that an unshared smile is a wasted smile. 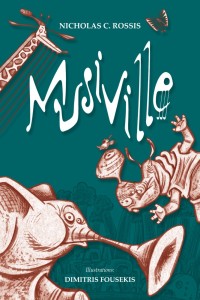 “Jalina (5 yo) loves Musiville. She’s decided she wants to learn to play a musical instrument, but doesn’t know which one yet.”
~ S.K. Nicholls

A group of animals has evolved into musical instruments and have formed their own little village: Musiville. When everyone starts playing their own tune, however, an invader starts tearing down their buildings. Who can save Musiville from this unexpected threat?

This is the second children’s book of Nicholas C. Rossis, author of the multiple award-winner Runaway Smile. 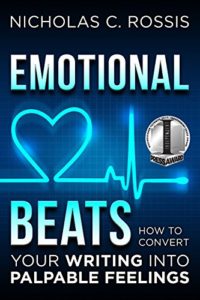 Do You Want To Show, Not Tell, Emotions?

Because of the way our brains are wired, readers empathize more strongly if you don’t name the emotion you are trying to describe. As soon as you name an emotion, readers go into thinking mode. And when they think about an emotion, they distance themselves from feeling it.