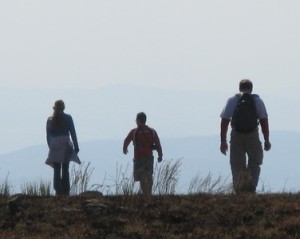 Patrick Andendall has always had an interest in politics and, being multicultural, he views issues from a more international perspective. In 2004, five days before the election, he flew to Cleveland and pitched in to help with the political process. What he discovered was the dissolution of the American Dream, which he writes about in his book, Stupidparty.

Educated at English boarding schools from the age of seven, Andendall went on to graduate from Lancing College. He started by sometimes working three jobs at once, trainee Underwriter/claim broker at Lloyd’s of London, his own one man cleaning Company (cleaning the very offices of a Reinsurance Company he would transact business at) plus doing seasonal work on various farms.

Having made some windfall profits by borrowing money in order to be a “Stag” to take advantage of opportunities created by Margaret Thatcher’s de nationalization policies of the mid 1980’s, Andendall evolved into an entrepreneur with a core specialty in Reinsurance in London and New York where he looks for patterns in numbers. Self-employed in a field not normally conducive to self-employment, he is able remain in control, juggle different jobs, travel and pursue his various interests.

Ending up in New York via romance in the African bush, Andendall now lives on Long Island with his wife, two children and two dogs.

Who is Jeb!!!: John Ellis “Jeb” Bush and his Horrendously Horrible Histories (Non-Fiction/Politics) 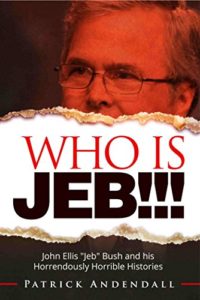 [*Note that the more expensive paperback is full-color. Buyers of either the full-color or black & white paperback can download the Kindle eBook for FREE.]

Jeb Bush, the good son—he could sing the good song, if only he had the soul. Jeb the moderate, the sensible conservative, competent governor, business builder, self-deemed wonk, establishment darling. How has this mirage been rigged? What well-oiled machinations have orchestrated such delusions? Just drill a little deeper, uncap the well, expose the pent-up secrets and witness a ground-shaking blowout.

With hindsight, we can now see that even a modicum of due diligence into his brother’s DNA would have allowed a picture of what was destined to transpire during that presidency—for It was written. The answers lie in the family’s long-standing nefarious histories.

If Jeb disappears prematurely from our radar, vital truths may remain buried for yet another generation. Understand who Jeb is; then one can actually understand virtually every misstep America has taken since the 1950s, leading remorselessly to War, the birth of radicalism, polarization and the Stupidparty, all the way to 2016, with its abysmal collection of Stupidparty presidential candidates–none of whom have any interest in salvaging American democracy, or learning from such histories.

Jeb’s heart does not beat in tune with the needs of the American people; it beats to a different drum. To find its source, to understand its rhythm, we must venture into shadowy secret castles to reconnect with echoes of the past, in order to avoid an inglorious future. 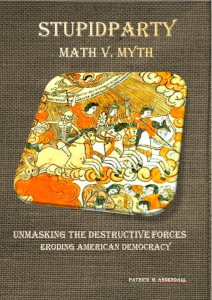 If you feel overwhelmed by the utter nonsense that passes as discourse in politics and in the most of media to day –then this book is the antidote.

I feel academics have had their chance to have a discussion with the American people, but apart from the literati – few appear to be listening.

Now is the time to perhaps break the traditional mold and tell a story by keeping issues very simple, visual, blending outrage with humor. The reader will have the option to dig deeper if they so choose, find facts, studies and videos’ if they choose. Minimally this book could be a resource to reach out to wavering friends – providing easy access to source material

Math is kept easily accessible – by not doing so you then create “clutter” with too many explanations.