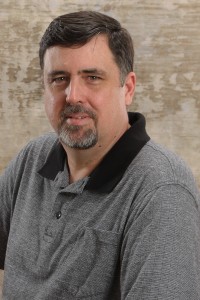 Richard began his writing career as a freelance writer in 1984 in Texas and gained his first fiction credit serving as the lead writer for the first two issues of the Elite Comics sci-fi/fantasy series, Seadragon.

In 1991 Richard began his sports writing career at the Gallup Independent in New Mexico before moving on to serve as an editor and photographer for several newspapers and online publications. He won the 2001 California Newspaper Publishers Association award for Best Sports Story while at the Turlock Journal and a CNAE award for pagination in 2005 while serving as Sports Editor at the Merced Sun-Star. He was named a Player of the Year in 2002 by the CCMR Racing Series for his coverage of auto racing while at the Sun-Star.

In 2013, Richard retired as a sportswriter and decided to return to his fiction writing roots. He released two short stories – The Invited and Legacy of Death – as well as a full-length sci-fi novel, Maelstrom. In 2015, Richard completed nearly two years of research and interviews and published, From The Fields: A History of Prep Football in Turlock, California, chronicling 95 years of high school football in his hometown. One month later, his first traditionally published novel, Reservations, was released by Oak Tree Press.

Richard was very busy in 2016, contributing to both Beyond Watson and Holmes Away From Home, a pair of Sherlock Holmes anthologies released by Belanger Books. The second book of the Del Rio Series, Betrayals, was released as was Richard’s second sports non-fiction title, Perfection’s Arbiter.

Richard recently published his second sci-fi novel, Escaping Infinity, and is currently working on the remaining two books in the Jack Del Rio series, Shades and Endgames, slated for release in 2017 and 2018. 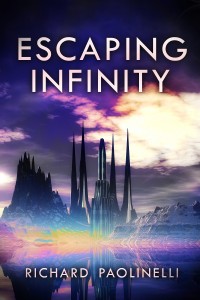 Thousands have checked into the Infinity Hotel over the years.

None of them have ever checked out.

Peter Childress and Charlie Womack are successful engineers on their way to Phoenix for an important presentation. But one of Charlie’s infamous “shortcuts” has gotten them good and lost once again. As night falls, the pair stumble across the Infinity Hotel and the promise of a meal, fuel and a good night’s sleep before starting off fresh in the morning is too good to pass up.

But while Charlie immediately takes to the hotel’s amazing amenities, Peter begins to uncover some of the hotel’s dark secrets – a seemingly unlimited number of floors, guests that appear out of time and place and a next morning that never seems to come. Worse still, the entrance to the Infinity has disappeared and no other apparent exit back to the outside world is in sight.

Now, under the watchful eyes of the hotel’s manager and front desk clerk, Peter searches for a way back out and uncovers the horrible truth behind the mystery of the Infinity Hotel. 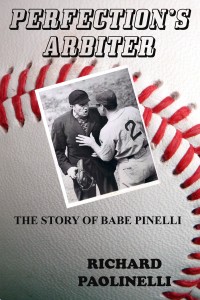 On October 8, 1956, New York Yankees pitcher Don Larsen threw the only perfect game in World Series history against the Brooklyn Dodgers. But the story you have never heard, a story that, had it not happened the way it did, might have changed the very history of baseball is the story of the man in the mask and blue umpire suit standing behind the plate and Yankees catcher Yogi Berra. That man was Ralph “Babe” Pinelli.

Had it been any other umpire that day other than Pinelli, Larsen’s perfect game might never have happened, if not for how Pinelli grew up in early 20th Century San Francisco, how he overcame losing his father in the 1906 Quake, how he overcame his hot temper to become a major league baseball player and umpire.

Perfection’s Arbiter looks at the amazing life and career of Ralph “Babe” Pinelli, the man fate chose to be exactly where he needed to be on one of the game’s greatest days. 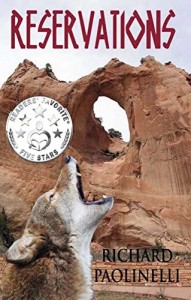 Who – or what – is killing members of the Navajo tribe?

RESERVATIONS, a mystery/thriller, is set near Gallup, New Mexico, where the Navajo, Hopi and Zuni reservations lie adjacent. Three tribal leaders have been murdered – murdered in a fashion that suggests the deeds were carried out by COYOTE, a legendary supernatural evil trickster feared by many Native Americans.

The tribal president contacts an old friend in the FBI for assistance in solving the crimes and preventing more murders. Star agent, Jack Del Rio, is dispatched to New Mexico where he finds a situation tangled in political intrigue. Jack must work his way through those issues on his way to solving the mystery. Sparks fly as Navajo police officer Lucy Chee is assigned to assist him in his quest.

Question is can Del Rio and Chee solve the mystery and find the killer before he strikes again? If not, who is next? 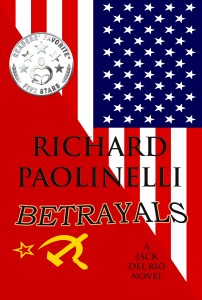 Betrayals, a compelling political conspiracy mystery thriller, heralds the return of FBI star agent, Jack Del Rio, who is perhaps the only man in America who can stop the
strings of assassinations and conspiracies that threaten to topple the entire government administration and bring the United States under the thumb of evil dictatorship.

Unable to trust even his closest friends and allies in the Bureau, Jack must first survive multiple attempts on his own life then sort out the evil doers who have wormed their way
into top positions and do this in time to save the President of the United States – who may just be one of the conspirers himself. It’s a race to the finish and the devil takes the
hindmost.